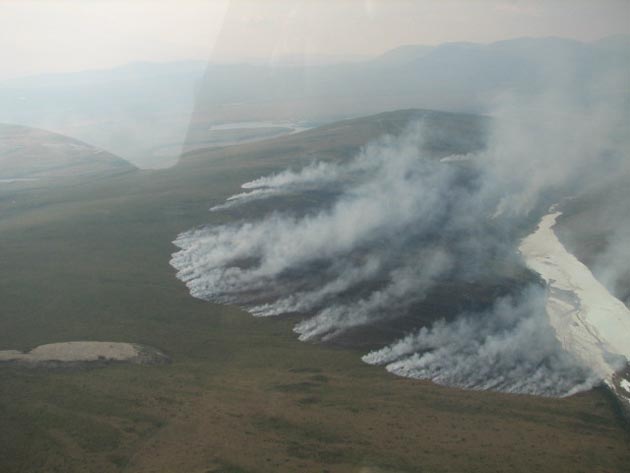 A fire burns alongside a still frozen river in the Alaska wilderness.<a href="http://www.nps.gov/fire/public/pub_firephotos.cfm?photoid=3857&threadid=4918">National Park Service</a>

To step into the US Army Corp of Engineers’ Permafrost Tunnel Research Facility in Fox, Alaska—just north of Fairbanks—is to step back in time. Burrowed into the silt layers of an unassuming hillside, the tunnel is like a scene out of a sub-Arctic Indiana Jones adventure. Shivering, you walk the length of an underground football field, past protruding bones of Ice Age animals (including mammoths) and huge ice wedges, which were frozen in place long before Hebrew scribes compiled the Old Testament. The smell is overpowering: Dead plants and other organic materials are suspended in the frozen soil walls, decomposing and reverting back into the carbon dioxide and water from which they were originally formed. But because of the cold, that process is extremely slow: Deep in the cave, a 32,000-year-old frozen plant sticks out of a wall. It’s still green. The leaves still contain chlorophyll.

That plant, like the permafrost cave as a whole, is in a state of frozen suspension. But walking through the tunnel, you’re acutely aware of how quickly that suspension might end. The facility is maintained through a cooling system at 25 degrees Fahrenheit, without which the cave would collapse, and the ancient geological history lesson would be abruptly over. And the carbon that had slowly accumulated in the soils of the cave over tens of thousands of years? Much of it would be released into the air.

A view inside Alaska’s unique permafrost research tunnel. US Army Corps of Engineers

Throughout Alaska and similar northern or “boreal” environments across the world (from Canada to Russia), huge volumes of permafrost hang in a similar balance. In much of this region, ground temperatures are just below freezing, leaving their frozen soils right on the cusp of thawing. “It’s kind of at the thermal tipping point” for permafrost, explains Rich Boone, an ecologist at the University of Alaska-Fairbanks. What might tip it over? Climate change, which is currently proceeding twice as fast in Alaska and the Arctic as it is in the mid-latitudes. And the warming releases a pulse of carbon from these frozen soils, as microorganisms break down the organic matter they contain and give off carbon dioxide (and, sometimes, methane). How much? Well, it is estimated that global permafrost contains twice as much total carbon as the planet’s atmosphere currently does. In other words, a lot.

Scientists have known for some time about the risk of large-scale carbon emissions from thawing permafrost. But in recent years, they’ve become increasingly attuned to an additional—and very worrisome—aspect of this threat. As climate change proceeds, larger and more intense wildfires are increasingly scorching and charring the forests of the north. While these fires have always been a natural and recurring aspect of forest ecosystems, they now appear to be undergoing a major amplification. And that, in turn, may further increase the threat of permafrost thawing and carbon releases—releases that would, in turn, greatly amplify global warming itself (and potentially spur still more fire activity).

“You have this climate and fire interaction, and all of a sudden permafrost can thaw really rapidly,” explains Jon O’Donnell, an ecologist with the National Parks Service’s Arctic Network. Scientists call it a “positive feedback,” and it’s one of the scariest aspects of global warming because, in essence, it means a bad situation is making itself worse.

When it comes to understanding the wildfire-permafrost feedback and just how bad it could be, one factor is clear: Wildfires are definitely getting worse. “The area burned by wildfires has been increased quite a bit over the last couple of decades,” says Terry Chapin, a biologist at the University of Alaska-Fairbanks. Indeed, a new study just out in the Proceedings of the National Academy of Sciences suggests that recent fire activity in these “boreal” regions of the globe is higher than anything seen in the last 10,000 years.

Fires are also becoming more severe, says O’Donnell. Finally, the seasonality of fires appears to be changing, with burns extending later into the summer, when permafrost has thawed more completely—once again, amplifying the overall impact of burning on frozen soils and the carbon they contain.

And here’s where the feedback kicks in: Large northern fires don’t just burn huge swaths of forest. They can also burn off the upper layer of lichen and mosses on the forest floor. When intact, this forest surface layer insulates the underlying permafrost and protects it from thawing—but getting rid of it takes away that protection, even as it also exposes the area to the heating of direct sunlight.

Plus, there’s an added effect: After a fire burns through a region, O’Donnell notes, it leaves behind an area of the earth’s surface that is blackened in color. And these dark areas absorb more heat from the sun, thus further upping temperatures and thawing permafrost. As the soil thaws, meanwhile, microbes have a much easier time decomposing its organic matter. “The microbes can start to crank on that carbon,” says O’Donnell, adding that the process results in the release of carbon dioxide to the atmosphere.

How quickly could the wildfire-permafrost feedback work to amplify global warming? That’s what researchers are currently trying to determine. “The main uncertainty is not whether it’s going to happen, but how quickly,” explains Terry Chapin of the University of Alaska-Fairbanks.

One key factor is how severely northern forests continue to burn. Another is whether there are any offsetting effects that might slow down the feedback. For instance, after northern forests burn, new vegetation gradually moves back in. And sometimes it isn’t the same type of tree: Often, black spruce forests will be replaced by aspens or birch. These trees actually store more carbon, so that’s a potentially offsetting effect.

It’s important to note that overall, northern boreal forest regions have been taking carbon dioxide from fossil fuel emissions out of the atmosphere or, as scientists put it, serving as a net carbon “sink.” But that’s changing. David McGuire, an ecologist at the University of Alaska-Fairbanks who runs models to try to determine how wildfires affect permafrost, estimates that about 5 percent of global carbon emissions have been sequestered by boreal forests; but his simulations suggest that because of the combination of global warming and increased wildfire activity, that number is decreasing greatly. “Fire increase in the boreal regions is potentially shutting down that sink activity,” says McGuire. The overall impact may be so large that it could undermine the effectiveness of policies to mitigate carbon emissions.

Deep in the permafrost cave in Fox, you walk through a section of tunnel that is, in effect, an ice cathedral. The entire ceiling is covered by a huge wedge of ice, and the formation stretches down through the cave walls to the floor on either side of you. You’re surrounded by ice, encircled. But as soon as you reach out your hand and touch the ceiling, ice that hasn’t melted in thousands of years undergoes a phase change, becoming drops of water on your finger. It just takes a touch of heat.

That’s essentially what we’re doing to the earth’s permafrost regions as a whole—and hoping the cave doesn’t collapse above our heads.