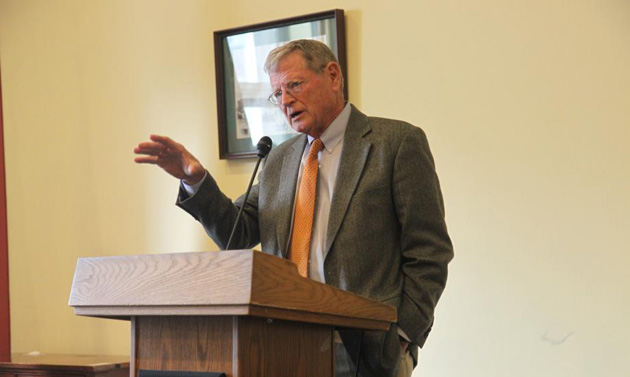 Google, which prides itself on building a “better web that is better for the environment”, is hosting a fundraiser for the most notorious climate change denier in Congress, it has emerged.

The lunch, at the company’s Washington office, will benefit the Oklahoma Republican James Inhofe, who has made a career of dismissing climate change as a “hoax” on the Senate floor.

Proceeds of the July 11 lunch, priced at $250 to $2,500, will also go to the national Republican Senatorial Committee.

It’s the second show of support from Google for the anti-climate cause in recent weeks.

Last month, the Washington Post reported that the internet company had donated $50,000 for a fundraising dinner for the ultra-conservative Competitive Enterprise Institute—topping the contributions even of the Koch oil billionaires.

The Competitive Enterprise Institute has launched multiple lawsuits aimed at trying to discredit the science behind climate change—accusing scientists of fraud. None have so far succeeded.

Google’s show of support for the leading climate contrarian in Congress was criticized by climate activists on Tuesday. “Google’s motto is ‘Don’t Be Evil’, but it is supporting one of the worst deniers of climate science in the world,” said the Climate Progress website, which first reported on the story.

Inhofe has spent more than a decade challenging the science behind climate change, and trying to stop Congress from acting on climate change. He has repeatedly dismissed climate change as a “hoax” or “hysteria”, and cited the benefits of global warming for the economy and the environment.

Google has been a corporate leader in fighting climate change. The company claims on its Google Green website to be creating “a better web that is better for the environment” by investing $1 billion in renewable energy and making considerable savings in electricity use at its data centers.

Google initially refused to comment on the record about its support for Inhofe.

However, a company spokesperson noted that Google maintained data centers in Oklahoma. The spokesperson then sent an email saying:
“We regularly host fundraisers for candidates, on both sides of the aisle, but that doesn’t mean we endorse all of their positions. And while we disagree on climate change policy, we share an interest with Senator Inhofe in the employees and data center we have in Oklahoma.”

Google’s website notes the company has invested $700 million in two data centers in Oklahoma. The state is a leading oil and gas producer—and Inhofe has been a strong promoter of the industry. However, Google has contracted to power its data centers through wind energy.

“They can probably rightfully claim that the facility is powered 100 percent by wind,” said Gary Cook, technology campaigner for Greenpeace, which tracks greenhouse gas emissions from the IT sector. He added: “But even so, Jim Inhofe is the biggest obstacle to climate change action in the Senate so what are they doing raising money for him?”