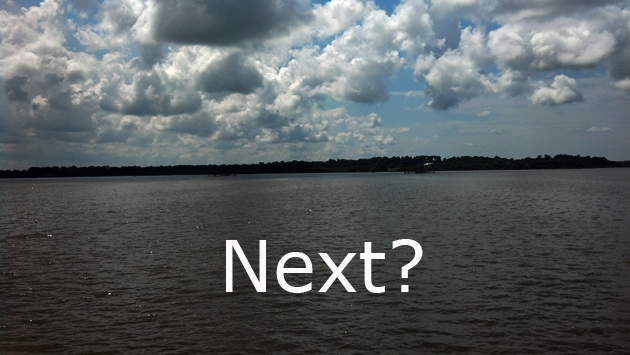 Virlie Langlinais was at her Louisiana home on Lake Peigneur when she saw the swirling vortex. “It was like watching a science fiction movie with tug boats and rigs and everything going on,” she recalls from the comfort of her friend’s porch some three decades later, a faint breeze licking off the water below. “Like watching a little ducky in a bathtub going down the drain.” Now she and her husband, Noicy, live in fear that it might happen again.

Lake Peigneur, the site of one of the state’s most spectacular industrial disasters in 1980, kept coming up in my conversations with residents of Bayou Corne, the Cajun community in south Louisiana that has been evacuated for more than a year due to a massive, mining-induced sinkhole that now spans 24 acres—and is still growing. Last week, the state filed suit against Texas Brine and Occidental Chemical Company for damages relating to the disaster. (Read my story on Bayou Corne, which appears in the September/October issue of Mother Jones, here.) So on a sticky Sunday morning in June, I crossed over the Atchafalaya spillway to see the place for myself.

In November 1980, in the process of generating revenue for (of all things) an environmental cleanup fund, a Texaco oil rig accidentally punctured the top of a salt mine situated beneath the lake. The water above emptied into the mine, creating a whirlpool that sucked 11 barges into the caverns below, turned the lake from freshwater to saline, and caused the Delcambre Canal to flow backwards. Three days later, 9 of the 11 barges “popped up like iron corks,” the Associated Press reported; the other 2 were never found. Miraculously, all 55 workers who were inside the mine at the time of the accident managed to escape.

The disaster caused drilling in Lake Peigneur to cease—at least for a time. The lake showed signs of recovering from its industrial past after that, although it was several hundred feet deeper and stocked with a new species of fish that could live in the saltwater ecosystem. But industry slowly began to creep back.

In 1994, natural gas giant AGL Resources developed two storage caverns in the salt dome beneath the lake, and about eight years ago, the company announced plans to expand its existing caverns and add two more. (Salt caverns—man-made, skyscraper-size cavities punched into enormous underground deposits known as salt domes—are considered ideal storage facilities for natural gas, crude oil, and even some radioactive materials; the Lake Peigneur caverns are located inside what’s known as the Jefferson Island Dome, so named because it juts up above the surface.) Around that time, residents began noticing mysterious bubbling in the lake—stretching in straight lines for hundreds of feet, as if drifting up from some underground vent. In 2006, then-Gov. Kathleen Blanco blocked the proposed expansion. AGL then sued the state, and the parties settled three years later; AGL made a series of concessions but was not required to produce an environmental impact statement.

Efforts to identify the source of the bubbling have been unsuccessful. In February, after visiting the lake, experts from the Louisiana Department of Natural Resources admitted they had no idea what was causing the foam. Nevertheless, in March, eight months after the ground opened up in Bayou Corne, the state granted a permit for AGL to begin dredging work in preparation for the development of the new storage caverns.

The Louisiana Environmental Action Network (LEAN) and Save Lake Peigneur quickly filed suit to block construction on the caverns pending the composition and publication of an environmental impact statement. And in a rare twist for Louisiana politics, the activists have the backing of two leading Republican lawmakers, Sen. David Vitter and Rep. Charles Boustany, both of whom have strong ties to the chemical industry. New Iberia Parish sheriff Louis Ackal, who lived through the swirling vortex of 1980, may be the most outspoken elected critic; in March, he warned Lafayette’s KATC that another disaster on Lake Peigneur would dwarf what happened in Bayou Corne.

Ackal’s nightmare of a 1980 repeat seems far-fetched. As AGL Resources notes in an FAQ page on its site, “Technology has changed dramatically since 1980, when the incident occurred, and the location of this project—deep below the central to northern section of the lake—makes it highly unlikely such an event would occur again.” Furthermore, there are no active salt mines underneath the lake for a new well to puncture.

The more pressing issue has to do with the potential for oil and gas to leach into the aquifer—and the impact that an active solution mine, pumping up 3 million gallons of freshwater from the aquifer every day in order to flush out the cavern, would have on the water table where 5,000 people live. The Department of Natural Resources contends that residents’ fears of a cavern breach is out of the question because there’s too much of a buffer between the edge of the storage caverns and the edge of the Jefferson Island Dome. Lake Peigneur’s caverns are about 1,400 feet from the edge—roughly 10 times further than the cavern that collapsed from the side in Bayou Corne. (Prior to last year’s Bayou Corne collapse, regulators and geologists believed the only risk to a salt cavern’s structural integrity came from a top-down collapse.)

But LEAN adviser Wilma Subra argues that even though the caverns aren’t near the edge of the cavern, they’re still relatively close to a pocket of oil and gas, which could be released into the aquifer if something went wrong—and LEAN points to the bubbling as evidence that it may already be happening. According to an analysis from George Losonsky, a hydrologist who has worked with both Save Lake Peigneur and various state agencies, “the geologic formation comprising the salt dome and surrounding rock [is] inherently unstable” and the possibility of some sort of fracturing is a real one.

In a statement provided to Mother Jones, AGL spokesman Duane Bourne sought to allay these concerns:

Approximately 200 salt domes caverns operate in Louisiana. Our Jefferson Island facilities are different than the Assumption Parish cavern because our caverns only store natural gas, not brine. Also the location of our salt dome is different and our existing caverns at Jefferson Island have passed a mechanical integrity test within the last three years, which the Assumption Parish facility failed.  While we have heard the concerns of the Save Lake Peigneur group, we vigorously disagree with their assertions related to our project. We believe once this project is completed it will be beneficial to the surrounding communities in ensuring energy continuity and we will continue work on its completion in accordance with all state and federal mandates.

One group who’s keenly aware of the lessons of Lake Peigneur is the displaced residents of Bayou Corne and their supporters. At a community meeting at the Assumption Parish Library in late June, the evacuees heard from a special guest—retired Lt. General Russel Honoré, a South Louisiana native who handled the military’s humanitarian response to Hurricane Katrina. Honoré, dressed informally in khaki shorts and New Balance sneakers, was mostly there to listen, jotting down stories and stats in a lined notebook, but after a while, he gathered his thoughts and outlined the stakes.

“We can’t allow these companies to come in here and disrespect our people, they already disrespected our land,” he said. “Because if you haven’t read it yet, you should read what happened to Jefferson Island.”