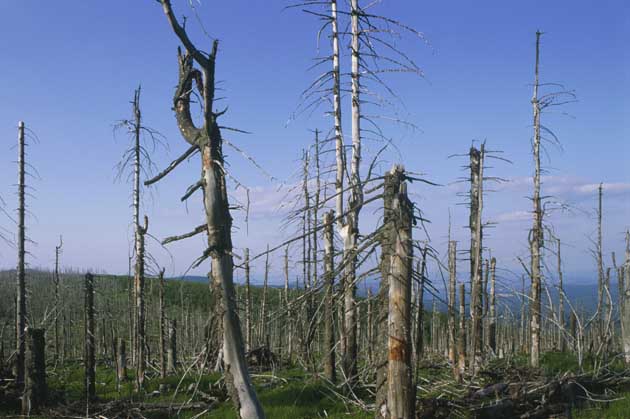 A forest killed by acid rain in Poland, 2008.David Woodfall/ZUMA

In the 1980s, the dying red spruce trees of New England—many of them taller than eight-story buildings and more than three centuries old—furnished frightening proof of the power of acid rain. The trees were seen as a canary in the coal mine, and it was easy to imagine the ensuing consequences for the forest at large.

“Half the red spruce… are dead,” Dudley Clendinen wrote for The New York Times from New Hampshire in 1983. “Some of the balsam fir are beginning to look sick. Sugar maples have fallen, as have beech trees, and Dr. Richard M. Klein, one of the two directors of the university’s research project, worries that with spring, they may find that ash trees are down on the mountain, too.”

The prospect of dead forests galvanized Americans and their representatives. In 1990, Congress amended the Clean Air Act to include the Acid Rain Program. The impact on the targeted pollutants, sulfur dioxide and nitrogen oxides from power generation, was remarkable. Between 1995 and 2011, emissions of sulfur dioxide fell by 64 percent; nitrogen oxides by 67 percent.

And the red spruce? According to a study by the University of Vermont and the U.S. Forest Service, released this August, the trees are healthier than ever. The diameters of these once-fragile trees are now growing at twice the average rate of the last century.

It’s been 50 years since Dr. Gene Likens and his colleagues first discovered that rain samples in the White Mountains had a pH content of 4.1, well below water’s neutral pH of 7. The connection between acid rain and atmospheric pollution had been previously observed, but over the next decade, Likens and others collected samples from across the Northeast. Their findings, announced to the world in a 1974 paper in Science, set an environmental movement in motion.

“At present, acid rain or snow is falling on most of the northeastern United States,” they wrote. “The annual acidity value averages about pH 4, but values between pH 2.1 and 5 have been recorded for individual storms.” For comparison, lemon juice and vinegar have a pH of 2; pH 4 is similar to tomato juice.

Over the next dozen years, acid rain became a household term and an environmental bogeyman. Perhaps as vivid a warning sign as the red spruces were the hundreds of dead Adirondack lakes void of fish. In an attempt to neutralize the acid content of one 50-acre lake in upstate New York, scientists poured in 14 tons of baking soda. But such measures were only stopgaps.

The decade-long Congressional study that finished in 1990 brought mixed news. The red spruce were indeed dying, but there was “no evidence of widespread forest damage.” Many lakes were poisoned, but the risks of environmental apocalypse were overstated. For skeptics of the environmental movement, the findings constituted a victory. Many conservationists were outraged by perceived shortcomings with the study. And yet, there was enough evidence, and enough concern, to prompt the passage that year of the Acid Rain Program to restrict emissions of sulfur dioxide and nitrogen oxides from power plants.

Acid rain became a household term and an environmental bogeyman.

All in all, the whole episode is considered a success for the environmental movement. The Environmental Protection Agency considers the Acid Rain Program a paradigm. It wasn’t just the trees that benefited. A 2011 report [PDF] prepared by the Office of Science and Technology Policy estimated the annual benefits to human health alone fall between $170 and $430 billion. The lower number far exceeds the costs of the program.

The recovering red spruce forest, though, makes a curious legacy, because scientists are unable to say for sure if the resurgence owes more to a decline in acid rain or to climate change.

The connection between the two environmental phenomena is fitting. For one thing, climate change deniers continue to cite acid rain as an example of the environmental lobby’s tendency towards fear-mongering. “The story of acid rain is not of catastrophe averted but of minor environmental nuisance somewhat abated,” Matt Ridley—who has recently come under fire for his climate change op-eds in the Wall Street Journal—wrote in Wired last year. Not surprisingly, acid rain is also a favorite topic of the “Agenda 21” crowd. They’ve heard these green “lies” before.

But those who worry about climate change should look at the acid rain panic in a different light. The fear that red spruce decline was a sign of imminent, widespread deforestation may not have come true, but the sight of brown-leafed New England forests nevertheless helped bring about a landmark piece of legislation—one whose benefits are made quite clear in the 2011 congressional report [PDF]. Together with dead lakes, they helped make the damage of acid rain real to Americans and bring about a government response not two decades after the threat was first reported in Science.

In this respect, the contrast with our current situation is striking. As Cass Sunstein wrote for Bloomberg two weeks ago, the present environmental threat seems to strike visceral fear in neither Americans nor their lawmakers. Psychologically, climate change may be closer to the opposite of acid rain: no single identifiable perpetrator, no clear victims, no imminent threat. Its most vivid manifestation —the shrinking polar ice caps—is distant and abstract next to the images of acid rain damage to trees and lakes.

“The world is unlikely to make much progress on climate change until the barrier of human psychology is squarely addressed,” Sunstein writes.

If researchers want to study the connection between environmental disaster and popular concern, acid rain would be a good place to start.