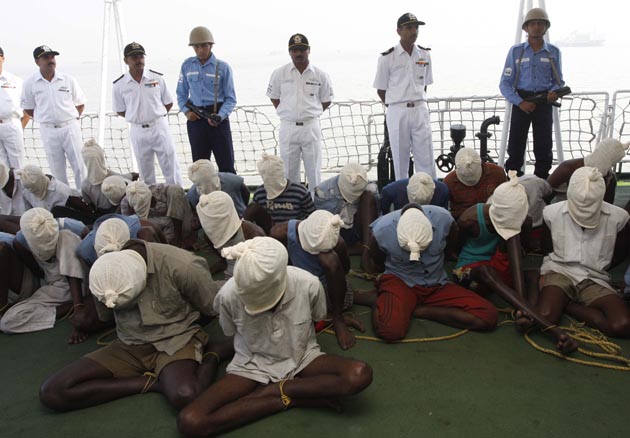 What do Somali pirates have to do with climate change?

Not much, except that the threat of the machine-gun slinging bandits has ended critical oceanographic research on the seabed of the Indian Ocean—research that is crucial to our understanding of how and when, exactly, the world’s largest arid region dried out. Climate investigations off the Horn of Africa were suspended just weeks before September 11, 2001, after a scientific vessel, the Maurice Ewing, was attacked with rocket propelled grenades 18 nautical miles off the Somali coast.

But, amazingly, one final research vessel somehow passed through a phalanx of small-craft pirate boats in the Gulf of Aden unscathed.

“It was like the wild west out there,” Columbia University marine geologist Peter B. deMenocal told me in a phone interview. They were getting frequent emergency faxes saying that ships all around them were being attacked. But their vessel was seemingly invisible to the pirates, whose launches they could clearly see.

It’s a good thing for science that they made it: The ship bore sediment cores, long tubes of mud from the bottom of the ocean. According to deMenocal, the results from the examination of those cores, to be published in the next issue of the journal Science, are poised to revolutionize our view of how the eastern Sahara and Horn of Africa became a desert.

This is a question that has huge implications for our understanding of how dry areas get created. In coming decades, as temperatures continue to warm in places like the American Southwest and the Sahel on the Sahara’s border, that understanding, and our ability to make accurate models based on it, will be crucial.

The Sahara—parts of which get virtually no rainfall—is the most arid region on Earth. But it was not always that way. There was a wet time, beginning around 10,000 years ago (called the African Humid Period), when large parts of the present-day Sahara looked more like the Serengeti plains in east Africa: tree-pocked grasslands which supported a diversity of animals such as giraffes, rhinos and roaming herds of wildebeest, as well as large human populations.

But then things began to change—the climate became progressively hotter and drier. This coincided with the founding of pharaonic civilization in Egypt 5,000 years ago, when human migration from increasingly inhospitable regions to the Nile Valley sparked the meteoric rise of ancient Egypt.

Precisely how—and how quickly—the region dried up, however, has been a matter of scientific dispute. A 2008 study by Stefan Kröpelin of the Institute of Prehistoric Archaeology at the University of Cologne in Germany of Lake Yoa in northern Chad concluded that there had been a gradual transformation to a desert environment over a period of several millennia, as the north African monsoonal rains gradually moved south.

However, the information from the final research vessel to brave Somali pirates may have just turned the tables on this accepted scientific view. Jessica Tierney, of Woods Hole Oceanographic Institution, and deMenocal, of the Lamont-Doherty Earth Observatory at Columbia University used a newly developed technique, the analysis of the hydrogen and carbon isotopes in minute particles of leaf wax (the shiny outer coatings of leaves) in ocean sediments to get climate information for the last twenty thousand years. The ocean, which is not subject to erosion and other geological and chemical processes that effect deposits on the land, preserves the Earth’s continuous climate history intact (much as ice core samples do in the polar regions.)

What the scientists found was that, far from shifting gradually from wet to dry, the climate in the Horn of Africa changed in perhaps as little as 100 to 200 years, incredibly quickly in geological terms. The reason north Africa warmed up, they believe, was a cyclic change in Earth’s orientation toward the sun (called precession) which caused more sunlight to fall during the Northern Hemisphere’s summer. But the precession cycle is slow, taking 23,000 years to complete. So why was the changeover in the Horn of Africa so quick?

“It shows something really surprising,” says deMenocal. “It’s evidence that climate doesn’t respond gradually to gradual forcing. It would be wonderful in global warming if everything just kept pace with the gradual rise in CO2, then we could plan for this, we would know what is going to happen, there would be some predictability in it.”

But what researchers like Tierney and deMenocal are increasingly finding is that climate doesn’t change in a linear fashion, but suddenly and seemingly unpredictably. That’s because there are positive feedback mechanisms that start to kick in and speed things up. For example, when the Arctic sea ice melts, as it has increasingly in recent years, the area of dark blue heat-absorbing ocean increases, raising temperatures, melting more ice, which in turn raises temperatures still further in an snowballing process.

Tierney and deMenocal suspect that there were similar positive feedback mechanisms at play in the rapid desertification of the Horn of Africa 5,000 years ago. It could involve what is called the Charney mechanism, which posits that as vegetation begins to thin in an area, it changes the reflectivity of the Earth which heats thing up, dries out more vegetation and leads to the rather abrupt formation of deserts. However, the carbon isotope data collected by the team do not suggest that this was the case. Rather, the authors hypothesize that there was a feedback mechanism involving Indian Ocean sea-surface temperatures, which greatly influence how much rain falls over east Africa.

Whether that is in fact what happened remains to be proven. It’s just one of the mysteries that need to be investigated further, deMenocal told me. The authors are itching to get back to the Gulf of Aden to drill even deeper core samples that would provide critical information on climate conditions during the period millions of years ago when humans first evolved from our hominid predecessors. This could throw light on the early stages of human evolution, which happened just next door in the East African Rift and the Horn of Africa.

This prospect is so tantalizing that de Menocal asked an admiral to provide a Navy escort for the few weeks it would take for researchers to drill those crucial cores. After listening patiently to the scientist’s pitch, the admiral shot him a sorrowful look. “Do you have any idea what our day rate is?” he wondered.

So, barring battleship protection, it looks like further investigations into east Africa’s climate history are going to have to wait until the pirates off the Somali coast find some other line of work.