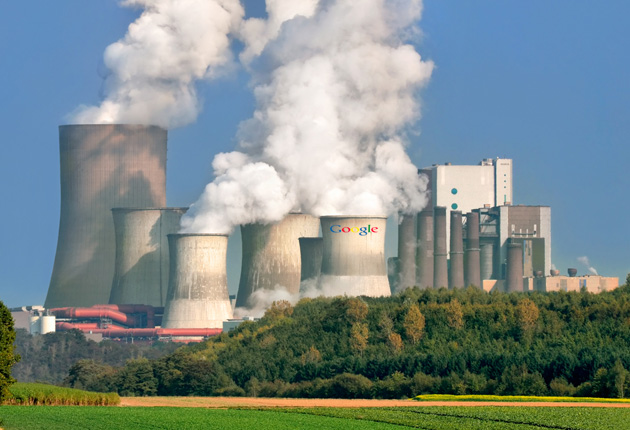 Utilities have taken their share of abuse as bureaucratic relics of the previous century, technological dinosaurs about to be obliterated by a giant asteroid called the Great Energy Shift as customers increasingly generate their own electricity from renewable sources.

But inevitably some of these lumbering beasts will adapt to the changing climate. Case in point, Duke Energy, the fossil fuel-dependent energy giant. The utility, with an assist from Google, on Friday asked North Carolina regulators permission to sell renewable electricity directly to big companies that want to green up their operations.

This is a big deal. While many states have imposed mandates requiring utilities to obtain a certain percentage of their electricity from renewable sources, others have not, particularly those that get most of their power from coal. Meanwhile, tech giants like Apple, Facebook, Microsoft and Google are building huge energy-hogging data centers in those states and are under pressure to avoid racking up big carbon bills. Programs like Duke’s proposed Green Source Rider could spur renewable energy production in the brown states as developers build solar and wind farms to meet demand from corporations.

“If approved, [the program] may help to promote economic development and growth of renewable energy in the region, and help our customers achieve their sustainability goals,” Paul Newton, president of Duke’s North Carolina operations, said in statement.

Renewable energy production certainly could use a boost in the South. Duke, for instance, only generates 8 megawatts of green electricity – from solar – out of the 20,407 megawatts it produces in the Carolinas, according to a March 2013 company report. That’s 0.039 percent.

Here’s how Duke’s Green Source Rider program would work. The program is open to any company that consumes 1 megawatt or more of electricity. A big power user like Google, which operates a giant data center in North Carolina, would file an application with Duke to buy a certain amount of electricity a year from renewable sources. Duke would procure that electricity and charge Google a $500 monthly fee as well as an extra $0.02 per kilowatt-hour to cover the costs of the program. Customers, in turn, would receive a credit on their bills for the renewable energy produced.

Two key things: First, the electricity generated would not count toward Duke’s obligation to meet a state renewable energy mandate, which means the program will produce additional green power. Second, any Renewable Energy Certificates (RECs) produced as a result of the Green Source Rider will not be transferred or sold to other companies that could use them to claim to go green. RECs are credits for renewable energy production and can be sold with the idea being they will encourage developers to build more projects. But if RECs are “retired” rather than sold, a company that wants green bragging rights will have to actually buy green power from a new project rather than the credits from one already built.”

The utility has proposed that it be allowed to buy green power from both North Carolina and out-of-state sources that can deliver electricity to the local grid.

Duke spokesman Jeff Brooks told The Atlantic that the company would likely procure renewable energy from solar installations in North Carolina and noted the state is home to some biomass power projects. “We’ve certainly been exploring options for wind power though we don’t have any utility-scale wind farms in the state currently, but that could come out of state,” he says.

While Duke deserves kudos, much of the credit goes to Google, which earlier this year proposed such green tariffs as a way for companies like itself to obtain renewable energy to power its facilities and which worked with Duke to design the program.

Google spokeswoman Kate Hurowitz told The Atlantic that the company has discussed green tariffs with utilities in other states.

“It’s our hope that this effort will encourage additional development of clean energy in North Carolina and elsewhere for growing companies like Google,” Gary Demasi, Google’s director of global infrastructure, wrote in a blog post.