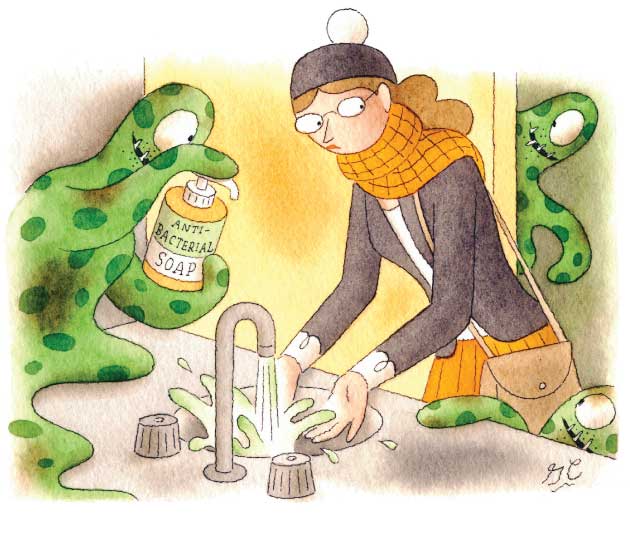 To hear the industry tell it, anti-microbial soaps are humanity’s last best option in a war against germs that lurk everywhere. On a site called Fight Germs Now—”the official source on anti-bacterial hygiene products”—the American Cleaning Institute sings their praises, warning that “sometimes plain soap and water is not good enough.” The fast-growing market for anti-bacterials—most of which rely on an active ingredient called triclosan—is estimated at $1 billion. Triclosan is also in items such as socks, yoga mats, cutting boards, ice cream scoops, and pencils. No wonder the Centers for Disease Control and Prevention (CDC) estimates that it’s present in the urine of three-quarters of Americans.

But on December 16, the FDA issued a proposed rule that would require companies to provide “more substantial data to demonstrate the safety and effectiveness of antibacterial soaps” before selling these products. The move is in response to the mounting evidence that triclosan might not be as effective as manufacturers claim. Bill Schaffner, a professor of preventive medicine and infectious diseases at Vanderbilt University, points out that triclosan soap products are useless when it comes to most seasonal infections: They target bacteria, not the viruses that cause colds and flus. And they don’t work any better on bacteria than standard soap—which also gets rid of viruses. In a 2008 review in the American Journal of Public Health, researchers scrutinized hundreds of hand hygiene studies and found “little evidence” that anything beat regular washing in reducing the symptoms associated with infectious gastrointestinal or respiratory illnesses.

Over the past 15 years, the FDA has approved just 15 new antibiotics—in the preceding 15 years, it approved 40.

Not only that, but there is strong evidence that anti-bacterial soaps contribute to antibiotic resistance. In 2004, a team of University of Michigan researchers found that exposing bacteria to triclosan increased activity in cellular pumps that the bugs use to eliminate foreign substances. These overactive excretory systems “could act to pump out other antibiotics, as well,” says Stuart Levy, one of the study’s authors and a leading researcher on antibiotic resistance at the Tufts University School of Medicine. That’s a problem, since troublesome bacteria like streptococcus, staphylococcus, and pneumonia are already evolving defenses against our best weapons. Worse, there aren’t enough new drugs in the production pipeline. Over the past 15 years, the FDA has approved just 15 new antibiotics—in the preceding 15 years, it approved 40. The World Health Organization now views antibiotic resistance as “a threat to global health security.” And while triclosan’s contribution to the problem hasn’t been adequately studied, Levy believes it could be “significant.”

Triclosan also gets into waterways, where it could harm aquatic life. A 2013 Loyola University simulation found that the chemical caused “dramatic” algae die-offs and altered the natural composition of bacteria in streams—a potential problem for higher species, including vulnerable frogs and salamanders. Other recent studies have found that triclosan disrupts hormone production in lab animals.

The public health implications of triclosan led the European Union to ban it in 2010 from any product that might come into contact with food. Two years later, Johnson & Johnson pledged to phase it out entirely. The Food and Drug Administration was supposed to deliver a ruling on the chemical’s safety in 2012, but it still hasn’t completed its review. Meanwhile, with traces of the stuff showing up in Minnesota lakes, lawmakers there are pushing what would be the nation’s first triclosan ban.

Elaine Larson, an associate dean for research at Columbia University’s School of Nursing who has led dozens of studies on hand hygiene, argues that sanitizers can be more effective than soap and water, whose efficacy in removing germs depends on how thoroughly you wash. “If I wanted to clean my hands fast, I would use an alcohol-based hand sanitizer,” Larson says. The CDC agrees: In its guidelines for health care workers, it notes that “alcohol-based solutions were more effective than washing hands with plain soap in all studies.”

Note, though, that alcohol doesn’t remove actual dirt—which is why the CDC recommends regular soap and water as the best all-around option outside hospital settings. And hand sanitizer won’t work against the stomach bug norovirus or the armored spores of C. difficile, a serious and sometimes life-threatening infection most often found in hospitals: “You literally have to wash the spores off your hands and flush them down the sink,” Schaffner says. But for virtually all other germs, alcohol is very effective. “During flu season I am in favor of abundant use of alcohol-based hand sanitizers,” he says.

So if you’re a germophobe like me, it doesn’t hurt to grab a bottle of Purell for the road, but you might consider ditching those anti-bacterials. Contrary to industry spin, most of the time, plain old soap and water is good enough.