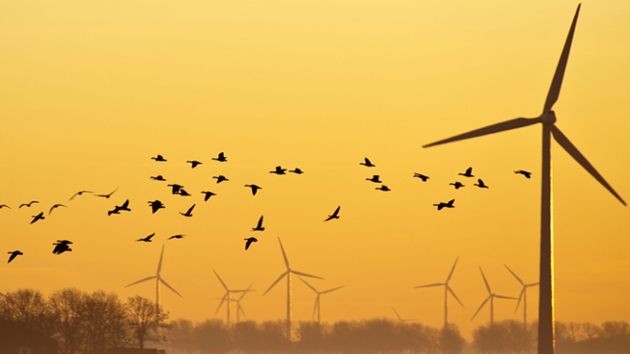 This story originally appeared on Grist and is reproduced here as part of the Climate Desk initiative.

Hundreds of thousands of birds and bats are killed by wind turbines in the US each year, including some protected species such as the golden eagle and the Indiana bat. That’s only a small fraction of the hundreds of millions killed by buildings, pesticides, fossil-fuel power plants, and other human causes, but it’s still worrying—especially as wind power is experiencing record growth.

Both the wind industry and the federal government have been under intense public scrutiny over the issue in recent weeks. In late November, the Obama administration fined Duke Energy Renewables $1 million for illegally killing birds, the first time a wind company has been prosecuted under the Migratory Bird Treaty Act.

Then, just two weeks later, the administration announced a controversial new rule that will allow energy companies to get 30-year permits for non-intentional eagle deaths at wind farms. The feds emphasize that the new rule requires additional conservation measures, but it still angered many conservationists.

The pressure is now on for wind energy companies to reduce bird and bat mortality. Lindsay North, outreach manager for the American Wind Energy Association, which lobbies for the industry, says wind developers are committed to “doing our best to try to have the lowest impact on birds.”

The industry is collaborating with wildlife researchers on promising technologies and approaches that are already being field-tested, and on some experimental and even far-fetched ideas that could help reduce mortality in the long term.

“I am very optimistic we can make significant progress,” said biologist Taber Allison, director of research at the American Wind Wildlife Institute, a nonprofit partnership of wind companies, scientists, and environmental organizations such as the National Audubon Society and the Sierra Club.

Here are eight things the industry is trying or considering in an effort to reduce bird and bat mortality.

1. Smarter siting
It’s all about location, location, location. The No. 1 way to prevent bird deaths is to do a better job choosing sites for wind energy development, said raptor researcher Richard Gerhardt: “It’s an issue of where you put the turbines.”

Federal wildlife officials, working with the industry, finalized more specific, stricter siting practices this year, as part of the same changes that allowed the 30-year permits for eagle deaths. In particular, federal officials are worried about the placement of wind farms in golden eagle habitat out West, and the new permitting process takes those concerns into account. When they are focused on their prey, golden eagles, which are protected under three federal laws, are especially vulnerable to turbines.

“Certainly as an industry we believe not every site is equal and not every site should be developed,” said John Anderson, director of siting policy for AWEA. “It starts with desktop analysis of where the risk lies,” he said. “But you can’t assess risks without on-the-ground boots analysis.”

It would be difficult for wind developers to avoid eagle territory altogether. “The eagles love to fly where the wind is high and strong and they can soar over open country,” said Frank B. Isaacs, golden eagle project manager for the Oregon Eagle Foundation. “And it is exactly the same places they want to put these wind farms.”

But wind companies can at least avoid eagles’ and hawks’ migratory routes and known flight paths. For instance, wind farms could be set back from cliffs and sloping hills where eagles use an updraft to soar, Isaacs said.

2. Radar
The industry is also turning to radar technology that could detect when eagles and other birds are approaching. Turbines could be slowed or shut down when the radar, along with employees monitoring the horizon, determine birds are within a certain zone.

Some radar systems are proving to be better than others at telling an eagle from a crow (or a swarm of insects), said Anderson. But live testing has shown that the more-refined radar technology can reduce the risk to large species, according to Allison, including protected birds such as whooping cranes, condors, and eagles.

This kind of early-warning radar technology has been deployed at wind farms along the Texas Gulf coast during the spring migration of songbirds. Some wind companies in the area are also watching for meteorological conditions that might suggest when songbirds are in migration, and conditions such as low visibility, when the songbirds might fly lower and thus closer to the turbines.

3. GPS tracking
Thus far there have been no reported California condor deaths caused by wind turbines. And at least one company is trying to ensure the endangered birds can coexist with the growing wind energy presence in the state.

Many of the 230 California condors flying in the wild are fitted with GPS transmitters, so Terra-Gen, one of the top wind developers in the country, uses a high-frequency receiver to track the condors near its California facilities.

“They are listening, if you will, for condors,” Allison said. “If they pick up a signal and it gets within this space, the company can say, ‘We’ll shut down this string of turbines.'” 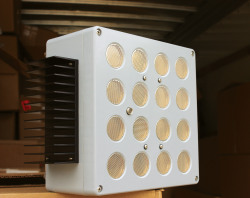 4. Ultrasonic acoustics
Most birds killed by wind turbines die because they get hit by spinning blades. Many bats seem to die for a different, even gorier reason: the lower wind pressure near the blades causes their lungs to explode. Because birds and bats react differently to turbines, scientists are pursuing different methods to protect them.

“There are two things that appear to be the most promising” when it comes to reducing bat deaths, said Chris Hein, wind energy program coordinator with Bat Conservation International.

The first of those is ultrasonic acoustic determent. Bat Conservation International has been collaborating with Deaton Engineering to design ultrasonic “boom boxes” that emit continuous high-frequency sounds, from 10 kHz to 100 kHz, intended to confuse bats’ echolocation to the point that they avoid the area.

“It essentially jams their radar, making it difficult to perceive sonar,” Hein said. “That creates a disorientating atmosphere, and they don’t want to be associated with that airspace. It doesn’t harm the bat in any way. It would be like going into an extremely bright room that is so bright we wouldn’t be able to navigate or see well.”

Study results on this kind of technology have been largely inconclusive so far, but Hein believes that’s because of the inconsistency of the devices that have been used to date. There are encouraging signs, he said. Tests of some ultrasonic acoustic equipment have found that it can halve the number of fatalities for certain species of bats.

“We still have a long way to go with that technology,” Hein said. For one thing, it needs to be refined to work better in rain and high wind.

But he’s hopeful that recent advances could lead to commercially deployable devices.

5. Leaving turbines off when wind speeds are low
The second strategy that has been shown to help reduce bat deaths is waiting longer to turn on the turbines, until wind speeds are higher. “Bats like to travel in very low-wind conditions,” Hein said.

According to the only published study on the subject, leaving the turbines dormant until wind speed reaches 5.5 meters per second reduced bat mortality by nearly 60 percent compared with normally operating turbines. The industry standard is to have blades start spinning when wind hits 3.5 to 4 meters per second.

The question is whether this method is economically feasible. Anderson said the industry is “in the process” of evaluating this strategy.

“It does come at a cost to the electric company,” Hein said. “But some of the early research shows the loss of revenue is not that much.”

This strategy is currently being employed at wind farms in the Midwest and East Coast within the habitat range of the Indiana bat, a medium-sized, mouse-eared bat listed as endangered since 1967.

6. Painting turbines different colors
Some research has shown that migratory tree bats are attracted to turbines, but the reason isn’t known, Allison said. One study found that they may associate the turbines with a body of water.

Another theory is that bats approach the turbines in pursuit of prey. A study conducted in England suggested that simply changing the color of wind turbines to hues less attractive to insects could reduce the number of bugs that congregate around the turbines, which could in turn reduce bat deaths.

Ultimately, understanding why bats keep coming to turbines will be key in finding ways to keep them safe.

In addition, engineers are exploring completely new kinds of wind equipment that could potentially be less harmful to birds and bats than traditional turbines. They range from large kites that harness the wind to vertical axis turbines.

A jet-engine-inspired design, called the FloDesign turbine, marks a distinct departure from traditional turbine design, with blades encased in a larger structure. Because it would be more visible, Allison believes it could pose less of a threat to birds.

8. Strike detection
If a turbine could recognize when it has been hit by a bird, it could potentially slow itself down or shut off to minimize the risk to other birds in the area.

A collaborative research effort between Oregon State University and Mesalands Community College in New Mexico is looking into this idea. Researchers are currently using tennis balls to mimic bird strikes.

The research could lead to commercial strike-detection equipment, said Jim Morgan, director of the North American Wind Research and Training Center at Mesalands. “If it works, it could be helpful for offshore wind,” said Allison.

Morgan is hopeful that the research at Mesalands and elsewhere will eventually lead to a notable reduction in bird and bat mortality. “Man is good at solving problems when someone is willing to invest in the science,” he said.

Reducing wind development’s impact on endangered species and other wildlife would help the industry avoid problems with the federal government and boost wind power’s public image.

Allison believes there is also another motive: “They want to do it because they are conservation-mined, too. Many people in the wind industry work in the industry because they believe they’re doing something to reduce the impacts of climate change, which many believe is the single biggest threat.”