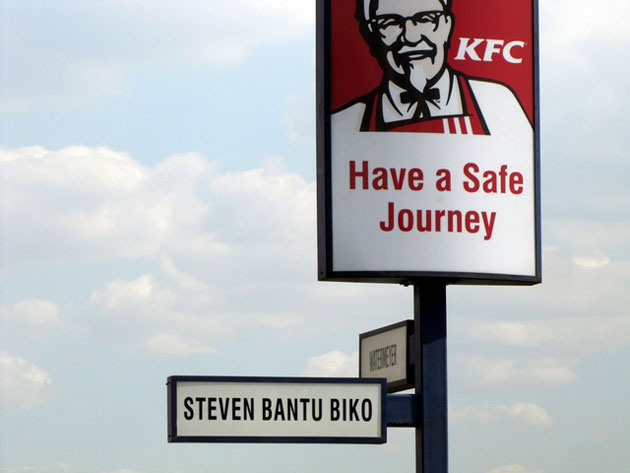 There are currently more than 750 KFCs in sub-Saharan Africa. Almost all of them are in South Africa, where they sell as much as 10 percent of the nation’s commercially grown chickens. Now the chain’s parent company, Yum Brands (“the defining global company that feeds the world”), is in the midst of a major expansion northward, with plans to sell drumsticks in Senegal, Ethiopia, and the Democratic Republic of Congo.

KFC’s target is Africa’s surging middle class, which is expanding both in numbers and weight. According to the United Nations Food and Agriculture Organization, poultry consumption in sub-Saharan Africa will increase 270 percent over its 2000 levels by 2030. Much of this growth is being fueled by urban, middle-class consumers who have embraced fast food, which often costs more than street food or other local fare, as a status symbol.

Yet the Colonel isn’t venturing into to Africa alone. He’s getting a boost from the US government and Gates Foundation—all in the name of food security and helping Africa’s small farmers.

In order to grow, KFC and other fast food brands require a steady supply of chicken that’s up to their particular standards. That may be a tall order for Africa’s small chicken farmers. In Ghana, for instance, local chickens are failing to meet the company’s demands for quality. The Wall Street Journal recently reported that Ghanaian farmers are not “professional enough” for KFC, forcing franchise owners to buy costly imports.

But where small farmers are falling short, Africa’s big chicken producers are succeeding. They’re demanding more and more high-protein feed, particularly soy. The US Agency for International Development and the Gates Foundation see that as an opportunity for small farmers—if they can be convinced to adopt a new crop. To do this, USAID and Gates are funding companies to build what development experts call “value chains”—business relationships that link small farmers to sellers of agricultural inputs like fertilizer on one side, and big buyers of corn and soy on the other. Those buyers turn these commodities into feed, and then sell it to large chicken wholesalers who are staking their future growth on supplying KFC’s African expansion.

The idea, explains USAID (PDF), is to give small farmers living on the edge new technology to grow more, allowing them to first feed themselves and then “diversify into commercial crops.” All over Africa, companies backed by USAID and the Gates Foundation are developing these supply chains and encouraging small farmers to join them.

In Mozambique and Zambia, Gates is backing an $8 million, four-year soy pipeline project with help from the agribiz giant Cargill. The company managing the project, TechnoServe, lists seven of Zambia’s largest chicken wholesalers (PDF) as the “end-market” for the soy. The list includes ZamChick, a chicken processor and fast-food chain largely owned by a South African wholesaler, and at least two others that maintain relationships with KFC. 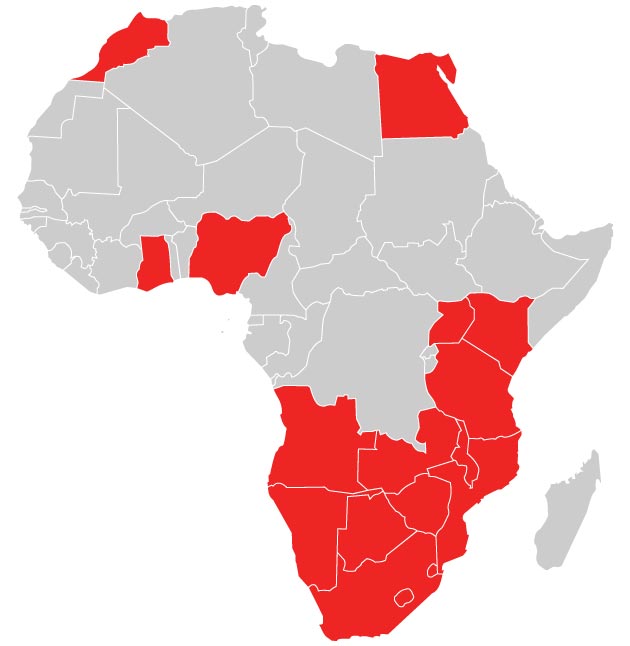 For large poultry wholesalers, the value chain system makes perfect sense: It’s a way to turn small farmers onto a single, high-protein crop like soy, then turn that crop into chicken feed, and, eventually, into chicken.

But for small farmers, the dual goals of feeding an industrial supply chain and feeding their families may not work together as neatly for small farmers as USAID and the Gates Foundation would like, says James McCann, a historian of African agriculture at Boston University. Soybeans, he says, “don’t really fit into the diet without processing. The processing is usually done by chickens.”

Of course, soy can be consumed by humans directly. But after shifting their already meager resources to soy, McCann says, small farmers may find it hard to sell to anyone but commercial feed producers. “Market expectations can change what farmers produce,” he says. “But are they producing for the local market, or for the value chain?”

Reached in the Zambian capital of Lusaka, Richard Hurelbrink, the director of the $24 million USAID-backed soy project, says that strengthening the supply chains for different commodities will create jobs. “Soybeans are important,” he says. “The end markets driving that market are the livestock sector for the manufacture of animal feeds. They’re demanding a lot of material.” Soy makes sense for Zambia’s small corn farmers, he explains, not only as a cash crop, but because it can be grown during corn’s off-season. Raphael Cook, a USAID spokesman, adds that while Zambian farmers have been growing soy for years, until recently the supply came almost entirely from large producers, and that increased demand is now creating opportunities for small farmers.

Andrew Eder, a spokesperson for TechnoServe, which is managing the Gates-backed project, says his company’s role is to connect farmers to “the best markets—local, regional or global— for their crop or product.” Asked if he was concerned that their project was poised to propel the fast-food industry into Africa, Eder reiterates the project’s mission. “Our focus is on improving the soy value chain in order to increase the incomes of the smallholder farmers with whom we work.”

A spokesperson for Yum Brands says the company was not working with USAID. “We primarily source our chicken in Africa locally and regularly work with local suppliers to increase production to meet our growing business and high quality standards,” she says. However, the company has been trying to get the agency’s attention. Records indicate Yum has lobbied USAID on foreign development assistance to Africa since 2011.

Meanwhile, African poultry wholesalers are already planning their expansion on the coattails of KFC and other fast-food chains. Take South Africa’s Country Bird Holdings. Ten years ago, it was a provincial operation; now it’s one of the nation’s largest poultry producers, providing more than 165,000 tons of chicken last year. Country Bird currently delivers 15 percent of its chicken to fast-food chains; it plans to increase that share to 35 percent. “It is CBH’s strategic intent to become a key supply chain partner of KFC as it expands into Africa,” the company said in its 2012 annual report (PDF). It even launched its own KFC franchise in Zimbabwe last year and features images of people eating KFC in its latest annual report.

Country Bird’s Zambia subsidiary controls 40 percent of the market for newly hatched meat chicks in Zambia, and intends to use its facilities there to export chicken to six neighboring countries. According to TechnoServe’s plan, the Zambian subsidiary is also one of the chicken wholesalers plugged into the Gates Foundation’s soy pipeline. Country Bird is also building a $42 million facility in Zambia to supply six neighboring countries—a project mostly funded through a World Bank loan. 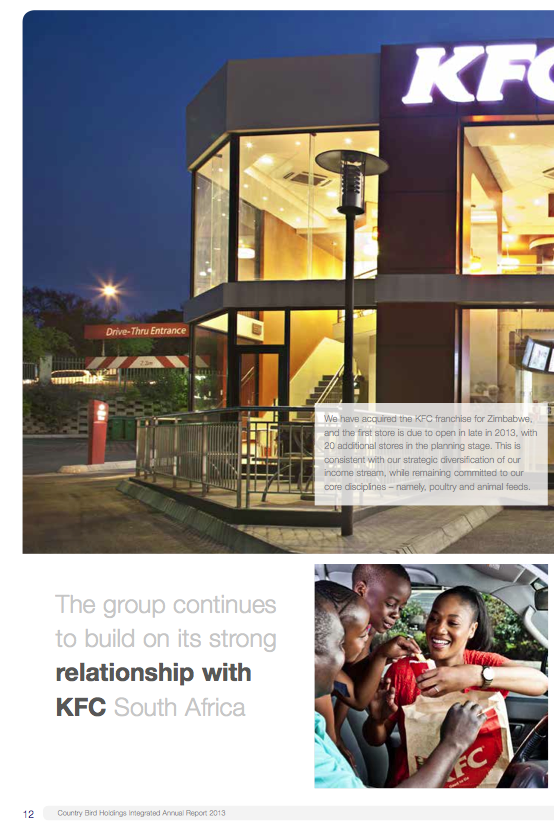 This is not to say industrializing the chicken industry won’t have some positive result for African countries. Like any retail chain with a long-term investment, KFC and other chains will hire more people and inject money into local economies as they grow. Moreover, placing a high value brand like KFC at the end of any supply chain could mean more money for everyone, farmers included.

But as KFC expands, everyone else in its supply chain, including small farmers, will likely orient themselves more and more to meet the company’s demands. As a 2009 UN report on transnational food corporations put it, a retailer’s need to ensure “product quality” requires coordination at every step of the supply chain, from farm to franchise. In other words, Yum’s success in Africa depends on guaranteeing the same sandwich or bucket of chicken everywhere it goes, whether it’s Lusaka, Zambia, or Louisville, Kentucky.

That insistence on consistency could lead to consolidation in the African soy market. Eder denied that this is a possibility in Zambia. But the American experience is telling: As poultry production has increased fivefold over the last four decades, the US soy industry has seen massive consolidation. As of 2007, there are 166,000 fewer soy farms operating than there were in 1969.

And in both Africa and the United States, hunger persists less because food is scarce, but because, too often, it’s unaffordable. Shifting African agriculture toward higher-value crops and the commercial food industry may make everyone involved in farming more money, but it may also lead to fewer farmers.

In the United States, farmers unneeded by the industry mostly went to cities to find new jobs. But African cities, already growing at a rapid clip, have proven unable to absorb the millions of people arriving from the countryside. At least when they get there, small farmers will have fried chicken—if they can afford it.