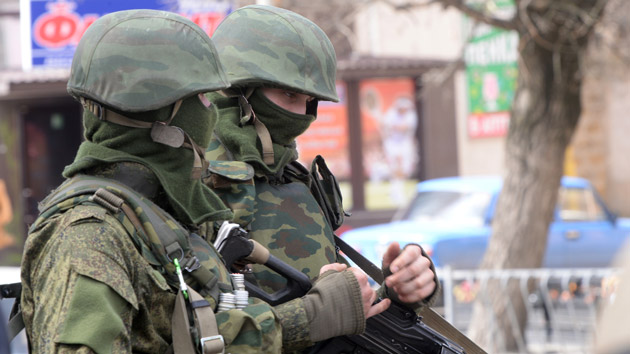 Here’s how it’s been in Ukraine: Cheap natural gas and massive loans from Russia; crooks and oligarchs in both Ukraine and Russia skimming money from the energy sector; and understandably squeamish foreign investors balking at having skin in the game.

On top of all that, there’s the ever-present risk for Western Europe of Russia turning off the gas tap. Most of Russia’s gas exports to Europe go through Ukraine’s pipeline system; Russian exports account for 60 percent of Ukraine’s gas consumption and around a third of Europe’s as a whole. Russia has long been able to use Ukraine as an energy choke point.

It all came to head in recent days, as then-Ukrainian President Viktor Yanukovych was forced from power and Russian-backed troops seized control of government buildings on Ukraine’s Crimean Peninsula. On Tuesday, Russia decided to cancel the economic lifeline it extended last year to Yanukovych, a deal that had included a hefty 30 percent discount on natural gas and the purchase of Ukraine’s debt. “That is not linked to politics or anything,” Russian President Vladimir Putin insisted. “We had a deal: We give you money and lower gas price, you pay us regularly. We gave money and lowered the gas price but there are no payments. So Gazprom [Russia’s state-run gas company] naturally says this is a no go.”

Now, American and European leaders are confronting the question of how to deal with Russia’s significant influence over the world’s hydrocarbon economy while also helping Ukraine’s fledgling government stand on its own two feet and clean up its energy act.

Here are four things you need to know about the role of energy in the current crisis:

1. The United States is rushing to push more gas onto the market to undercut Putin’s power. Russia’s presence in Ukraine is prompting calls, especially among congressional Republicans, to loosen export restrictions on US natural gas in the hopes of diminishing Russia’s ability to use gas as a diplomatic weapon, like it did in 2006 and 2009. With America’s newfound dominance in gas production (in 2013, the United States surpassed Russia to become the biggest producer of oil and gas, thanks in part to fracking) comes greater power in energy diplomacy.

“One immediate step the president can and should take is to dramatically expedite the approval of US exports of natural gas,” House Speaker John Boehner said on Tuesday. Adding new supplies to the global market—the United States is already in the process of approving a range of proposals to export gas—”sends a clear signal that the global gas market is changing, that there is the prospect of much greater supply coming from other parts of the world,” Carlos Pascual from the State Department told the New York Times.

But Tim Boersma, a fellow in the Energy Security Initiative at the Brookings Institution, warns that there are going to be no easy and fast solutions to the energy dominance Russia has established in Ukraine. “At the end of the day, what will not really change—whether we like it or not—is that Ukraine is an important transit country for natural gas,” he says. “The notion that some people have put out there that Ukraine could become independent of Russian gas in not realistic at all.”

2. Russia isn’t as powerful as you might think. But for all the Russian posturing, and the canceled energy deal, Ukraine—and Europe more broadly—does have some leverage over Russia to prevent the situation from deteriorating further, says Edward Chow, an energy and security analyst at Center for Strategic and International Studies (CSIS). “Interestingly, the gas pipelines, as well as critically important gas storage facilities, all go through Western Ukraine,” he says. “Until Russians build additional bypass pipelines…they are still highly dependent on Ukraine to transit gas exports to Europe.” And Ukraine’s supplies, mostly in the pro-reform western part of the country, could withstand a four-month Russian blockade, according to Reuters.

Tim Boersma from Brookings says Europe is in a good place right now to apply pressure: “Both parties have a lot to lose here,” he says. “But I would argue that Russia has more to lose than Europe at the moment. Russia needs European markets. Russia needs European demands. It is making roughly $100 million dollars a day from hydrocarbons.”

“Making matters worse would not really be good for Russia,” Boersma says. “As a hydrocarbon state, it essentially needs these revenues.”

Ukraine is already flexing its muscle as a consumer, and other countries are willing to help. The government’s energy minister announced yesterday that Ukraine is planning to reduce its reliance on Russian imports, filling the gap with Slovakian and German gas.

Meanwhile, because of an unusually mild winter that has resulted in lower heating demand throughout Europe, gas storage across the continent are up 13 percentage points from the same time last year, the highest since 2008, according to reporting by Bloomberg Businessweek. More gas in the tanks could mean Europe is more willing and able to hold its ground with Russia.

Reuters is also reporting that the European Union is trying to loosen the grip Russia has over Ukraine by offering energy to Ukraine through “reverse flows” of gas, sending back gas back east so Ukraine doesn’t have to rely on imports from Russia. And there’s also plenty of talk about Ukraine exploiting its own shale gas reserves via fracking, which some argue would help cure its addiction to Russian gas. In 2013, Chevron and Shell signed separate deals to explore extracting shale gas in Ukraine.

3. Now is the time to clean up Ukraine’s corruption. Ukraine has been hooked on cheap Russian gas for too long, says CSIS’s Chow. That has stifled incentives to modernize the economy and look for energy alternatives, all the while lining the pockets of the rich and powerful to the tune of billions of dollars every year. Chow says graft is endemic in Ukraine’s oil and gas industry. (Transparency International ranks Ukraine 144 out of 177 countries for perceptions of corruption).

“There was a so-called gas mafia that was around Yanukovych, but he wasn’t alone,” says Chow. “So this goes way back in time: Basically, the gas lobby siphoned off money through the flow of Russian gas through Ukraine to Europe. It’s a corrupt scheme.”

Chow hopes that the country’s fresh batch of leaders—with the mandate of a street revolution behind them and motivated by Putin’s “historic overreach”—will tackle the corruption that has infected politics and business since the country’s independence. “This is a once-in-a-long-while opportunity to finally fix the Ukrainian energy sector” by attracting foreign investment and making the gas deals transparent to the outside world says Chow.

4. The United States and European Union are making energy reform central to their aid packages. Bill Gibbons, a spokesman for the US Energy Department, said on Tuesday that the Obama administration is directing part of the $1 billion loan guarantee that John Kerry delivered to Kiev this week to “energy security, energy efficiency and energy sector reform.” The European Union’s $15 billion package is also aimed, in part, at modernizing Ukraine’s gas transit system.

With patrons of this much-needed aid linking their help to energy reform, there might well be a bigger chance of success, says Chow. “If you don’t do it now, when are you going to do it?” he asks. “Because Russia is not going to be interested in helping individuals from the new [Ukrainian] government extract rent like the previous government unless they can cooperate on other fronts. So this is quite a good opportunity to clean things up.”