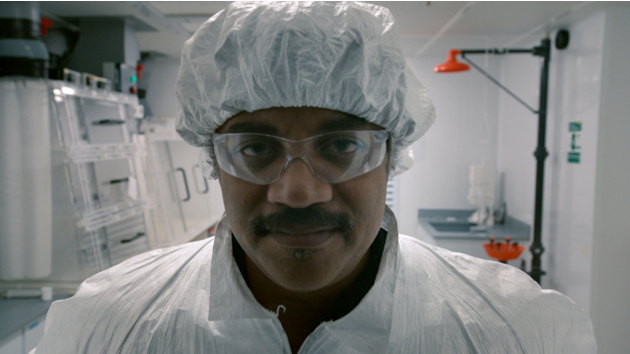 Neil Tyson narrates from a sterilized scientific "clean room" on the latest episode of "Cosmos."Fox

The most amazing thing about Fox’s new Cosmos series is that it exists at all. A program that is, at its core, educational, airing at 9 p.m. on Sunday and competing with shows like Game of Thrones…in what universe does that happen?

Today’s audiences are not accustomed to this sort of fare, and the show certainly hasn’t been a runaway success when judged by the most traditional metric: ratings. Last night, though, Cosmos powerfully demonstrated that those who haven’t watched it yet really ought to give it a shot (watch here). Simply put, Cosmos told a magnificent scientific story that drew together (yes, really) the tale of how we determined the age of the Earth (about 4.5 billion years old) and of how one courageous scientist showed, in the face of intense challenges, the dangers of leaded gasoline.

The story centers on on Clair Patterson, a researcher at the California Institute of Technology whose personal research trajectory explains this surprising overlap. Who knew that environmental-health insights would emerge from an inquiry in geology and physics? But that’s the thing about science: It leads you in surprising directions, and sometimes, vested interests don’t like where you end up.

Patterson’s life epitomizes that pattern. As Cosmos host Neil deGrasse Tyson explained last night, we are able to calculate the ages of rocks—and thus, ultimately, the age of the Earth—because we know that various radioactive elements decay, over time, at a fixed rate. Take uranium: It ultimately decays into lead. Thus, by measuring the lead content of rocks (or, in the case of determining the age of the Earth, in meteorites that are the same age as our planet), Patterson would ultimately manage to calculate the Earth’s age. (For more explanation, see here.)

The task turned out to be very difficult, however: Patterson’s early experiments were constantly being contaminated by the presence of environmental lead in his laboratory. Ultimately, Patterson had to design a completely sterile environment, a “clean room,” in order to get a reliable measurement. That’s how he got the basic answer that is still accepted today: The Earth is about 4.5 billion years old. (Sorry, creationists.)

And that’s also where the two narrative threads of last night’s Cosmos episode connect. “His award for this discovery?” explains Tyson of Patterson’s insight. “A world of trouble. He didn’t know it, but he was on a collision course with some of the most powerful people on the planet.”

Given his immense ordeals in conducting his measurements, it’s small wonder that Patterson grew attuned to the fact that lead, a potent neurotoxin, is all around us (this was the 1950s). So fresh off discovering the age of the Earth, Patterson started researching lead in the environment. He was ideally positioned to do so: After all, he really, really knew how to measure lead.

But now, Patterson wasn’t ticking off the creationists any longer; rather, he was about to encounter another source of science denial in America: corporate and special interests. “In searching for the age of the Earth, Patterson had stumbled on the evidence for a mass poisoning on an unprecedented scale,” relates Tyson. 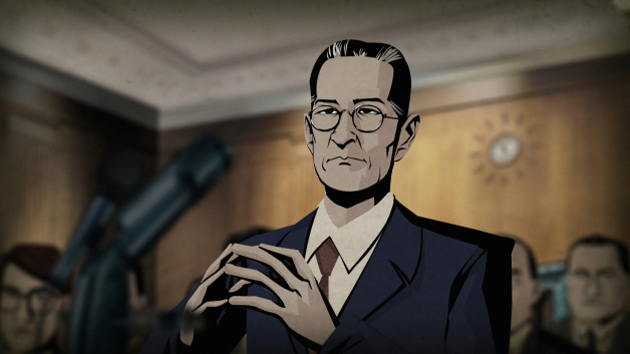 The story of leaded gasoline, and the attempts to call into question its dangers, has been extensively told. Along with the stories of cigarettes and perhaps asbestos, it is part of a series of historic tales of how corporate interests have tended to challenge and attack science that demonstrates the risks emanating from their practices or products. “This was one of the first times that the authority of science was used to cloak a threat to public health and the environment,” says Tyson.

Also at the center of last night’s Cosmos episode was a scientist named Robert Kehoe, whose work was funded by the lead industry and who was a “longtime scientific advocate for leaded gasoline,” in Tyson’s words. The episode depicted a historic clash between Patterson and Kehoe before the US Congress over the science of lead in the environment. It also explored just how hard it was for Patterson to take on this topic. “Patterson’s funding from the oil industry vanished overnight. In fact, they tried to get him fired,” asserted Tyson. (For a history of the battle over the safety of leaded gasoline, including Kehoe’s role, see this extensive 2000 article in The Nation. For a fascinating feature story by Mother Jones‘ Kevin Drum on the surprising connection between lead exposure and crime rates, see here.)

But of course, Patterson’s science ultimately won out on lead, just as it did on the age of the Earth. Tyson ended last night’s episode like this: “Today, scientists sound the alarm on other environmental dangers. Vested interests still hire their own scientists to confuse the issue. But in the end, nature will not be fooled.” As he says these words, we are looking down from above on a rotating Earth—a not-too-subtle allusion to global warming.

On our most popular episode of the Inquiring Minds podcast, Tyson explained why he doesn’t debate science deniers, and much more. You can listen here (interview starts around minute 13):