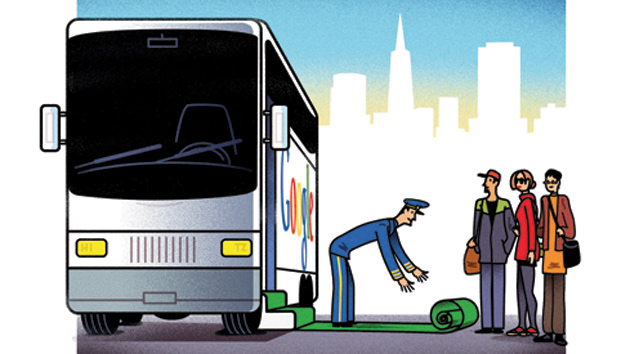 The Bay Area’s collective freak-out over tech companies’ private commuter shuttles reached a crescendo last December. Protesters in San Francisco blocked a bus headed to Google’s Silicon Valley headquarters, and, in Oakland, mobs surrounded two more Google buses, slashing tires, breaking a window with a brick, and leaving flyers instructing the shuttles to “get the fuck out of Oakland.” The incidents made headlines all over the world.

Of course, the mob’s real beef wasn’t the buses but their riders: affluent techies who have flocked to trendy neighborhoods in San Francisco, Oakland, and Berkeley, driving rents through the roof, the protesters claim—the average listing price for a San Francisco-area apartment soared 58 percent from February 2012 to February 2014, according to the search engine Rent Jungle. Evictions are up 38 percent since 2010, and many longtime residents have been forced to seek cheaper housing outside the city.

Although this fight is really about gentrification, somewhere along the way the shuttles’ environmental footprint became a battleground. The companies argue that their buses are a greener alternative to hour-plus solo auto commutes, while critics counter that any benefits are canceled out as people forced from their neighborhoods commute back into the city for work.

Passionate as each side may be, neither has offered much in the way of evidence. So here are a few facts to inform a debate that has generated a lot more heat than light:

How many of these shuttles are there, and where are they going? Given all the strong feelings, you might be surprised to learn that the numbers involved are pretty small. In 2012, according to surveys conducted by the city’s Municipal Transportation Agency, about 4,125 San Franciscans rode the shuttles to and from Silicon Valley every day. But Stamen Design, a local graphics firm that enlisted a team of bike messengers to follow the shuttles as they moved around the city and record the numbers of passengers boarding at each stop, estimates that the number of daily round-trips is closer to 8,925.

How many fewer car trips is that? The MTA calculated (PDF) that the shuttles save 757,223 car trips annually, which amounts to about 6,750 fewer metric tons of carbon dioxide emissions per year, the same as taking 1,400 cars off the road. Using Stamen’s numbers, that’s 1.6 million car trips and 14,605 metric tons of CO2—or about 3,075 fewer cars.

But without the shuttles, wouldn’t the techies move closer to their jobs? Maybe. In a University of California-Berkeley survey, about 40 percent said they would live closer to work if the shuttles didn’t exist. But it’s a moot point, because Silicon Valley doesn’t have the housing stock. A net 33,000 people moved to the area in 2013, according to a study by the economic-analysis firm Joint Venture Silicon Valley, while the region approved fewer than 8,000 new housing units—another 11,000 are needed to support all this growth, the authors estimated. During the same year, rents in the greater San Jose area jumped 10 percent, and the Silicon Valley Business Journal calculated that there are three jobs in Palo Alto for every available housing unit. Gabriel Metcalf, executive director of the Bay Area urban-planning research group SPUR, points out that the residents of Silicon Valley communities don’t want their neighborhoods to become any denser. “They’re dominated by people who think their cities are perfect and shouldn’t grow,” he says.

Back to the environmental impacts of gentrification… In theory, some San Franciscans forced to move to far-flung suburbs would then commute back into the city daily, adding more carbon emissions. But environmentally speaking, Metcalf says, the displacement argument doesn’t make sense. Say San Francisco enacted a law that prohibited Silicon Valley commuters from living in the city, and because of this law, all of the city’s longtime residents were able to stay put. The tech workers would still have to get to their jobs somehow, and since Silicon Valley housing is extremely limited, it’s likely they would have to commute from some other far-flung place.

So what can be done? The answer to the whole dilemma seems obvious: Put more housing near where people work. In 2012, Google proposed building 1,100 single-occupancy rooms close to its main campus in Mountain View. But the city’s residents balked. “We’ve spent so much time trying to make it the best place we possibly can,” one Mountain View city leader told the local newspaper. “We can’t love it to death by building every square inch.” (Constructing new affordable housing in San Francisco can take many years, thanks to a convoluted public process.)

Or what if, instead of creating a parallel private infrastructure, the technology companies were to invest in a killer public transit system? Beginning in the 1850s, several rival San Francisco companies began running horse-drawn stagecoaches along the city’s busiest corridors. Later, those carriages were replaced by privately operated cable cars and streetcars. In 1944, the city took over, and it continues to operate the lines today. In recent months, executives have talked a big game about giving back to their communities, and, in February, Google said it would donate $6.8 million to provide free transit passes for San Francisco’s low- and middle-income children. That’s a start—but helping to create the next big thing in public transportation would be even better.