For 11 episodes now, the groundbreaking Fox and National Geographic Channel series Cosmos has been exploring the universe, outraging creationists, and giving science teachers across the nation something to show in class every Monday. In the process, the show has been drawing more than 3 million viewers every Sunday night, a respectable number for a science-focused show that is, after all, a major departure from what prime-time audiences are used to.

Cosmos certainly hasn’t shied from controversy; it has taken on evolution and industry-funded science denial, and it has been devoting an increasing amount of attention to the subject of climate change. And apparently that was just the beginning. This coming Sunday, Cosmos will devote an entire episode to the topic. Here’s the episode description from National Geographic:

Our journey begins with a trip to another world and time, an idyllic beach during the last perfect day on the planet Venus, right before a runaway greenhouse effect wreaks havoc on the planet, boiling the oceans and turning the skies a sickening yellow. We then trace the surprisingly lengthy history of our awareness of global warming and alternative energy sources, taking the Ship of the Imagination to intervene at some critical points in time.

Courtesy of National Geographic, above is a clip from the new episode, which should have climate deniers fulminating. In it, host Neil deGrasse Tyson uses the analogy of walking a dog on the beach to helpfully explain the difference between climate and weather (pay attention, Donald Trump) and to outline why, no matter how cold you were in January, that’s no argument against global warming.

We’ve seen the rest of the episode already, and won’t spill the beans. But suffice it to say that it contains some powerful refutations of a number of other global warming denier talking points, as well as some ingenious sequences that explain the planetary-scale significance of climate change. It also contains some in situ reporting on the impacts of climate change, straight from the imperiled Arctic. 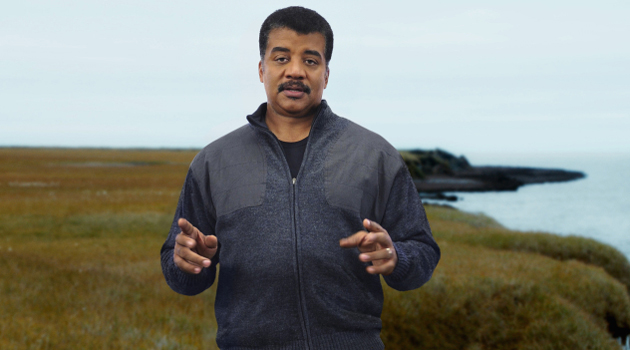 Neil DeGrasse Tyson travels to the Arctic to explain global warming, and its effect on thawing permafrost, in this Sunday’s Cosmos episode. Fox/National Geographic

Back in November, I observed that if Carl Sagan, the creator and host of the original Cosmos series, were alive today, he would have been a leader in the charge to address global warming. After all, Sagan, who made his scientific mark studying the greenhouse effect of Venus, was deeply concerned about the megaforces that determine planetary fates.

In covering climate change so extensively then, the new Cosmos is living up to the legacy of its original creator.

Note: For those who miss it on Sunday, Cosmos also airs Monday, June 2 at 9 p.m. on National Geographic Channel with additional footage.