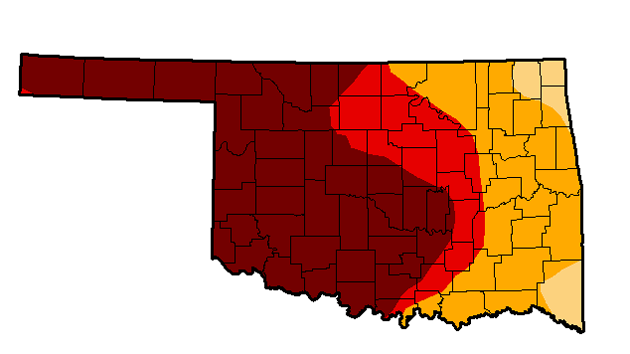 The drought situation in Oklahoma on July 26, 2011.<a href="http://droughtmonitor.unl.edu/MapsAndData/MapArchive.aspx">US Drought Monitor</a>

As much as any state in the US, Oklahoma is a victim of climate change.

In 2011, notes the newly released US National Climate Assessment, the state suffered from its hottest summer on record. For Oklahoma and Texas, the related drought, exacerbated by high temperatures, cost $10 billion in agricultural losses. And the report states as plainly as you can that climate change was involved. “These recent temperature extremes were attributable in part to human-induced climate change (approximately 20% of the heat wave magnitude and a doubling of the chance that it would occur),” notes the assessment.

Nonetheless, Oklahoma is known for its indigenous climate denial—witness its senior senator, James Inhofe—and now, it looks like some in the state want to prevent good climate science education from getting to Oklahoma’s kids.

Earlier this week, reports the National Center for Science Education, a committee of the Oklahoma House of Representatives voted 10 to 1 to reject a set of proposed “Oklahoma Academic Standards for Science” that have already been adopted by the state board of education. “A rejection of the proposed education standards by the legislature is unprecedented and at this point the real impact and implications are unknown,” says the Oklahoma Science Teachers Association.

“You basically have a couple of members on this committee who are second-guessing a panel of science educators who spent more than a year working on these standards,” says Glenn Branch of the National Center for Science Education. “And on the basis of a half an hour hearing, they decide to block what science educators in Oklahoma overwhelmingly regard as a major advance for science education in Oklahoma’s public schools.”

It’s clear that the issue of climate change content was a central reasons for the rejection. The Oklahoma science standards were, in significant part, based on the Next Generation Science Standards, which discuss climate change (and were rejected for that reason by the state of Wyoming earlier this year). And in legislative hearings, notes Climate Progress, Oklahoma Republican lawmaker Mark McCullough criticized the proposed Oklahoma science standards’ references to “the climate” and “human impacts on the environment.” McCullough suggested there has been “hyberbole relative to climate change” and asked if the standards “could potentially be utilized to inculcate into some pretty young impressionable minds…a fairly one-sided view as to that controversial subject, a subject that is very much in dispute among even the academics.”

You can listen to McCullough questioning a representative of the state department of education, who is defending the standards, here:

And indeed, for grades 9 to 12, one expectation of the proposed Oklahoma science standards is that students should be able to “analyze and interpret data to explore how variations in the flow of energy into and out of Earth’s systems result in changes in atmosphere and climate.” To really be able to perform such an analysis, you need to understand carbon dioxide and its role in human-caused climate change. And indeed, to really understand Earth science, you have to understand the greenhouse effect, which, in turn, leads you inevitably to the realization that humans are causing global warming.

So what happens next? Oklahoma science defenders, like the state Science Teachers Association and Oklahomans for Excellence in Science Education, are rallying to support the standards and advising Oklahomans to contact the legislature. But as things now stand, if the full House and Senate vote to approve the legislation that has come out of the committee, then the new standards would be blocked, at least until the next legislative session. Oklahoma and its educators would then “have to limp along with their old standards, which everyone agrees are terrible and atrocious and very bad,” says Branch of the National Center for Science Education.

By then, perhaps Oklahoma will have seen yet another scorching hot summer.