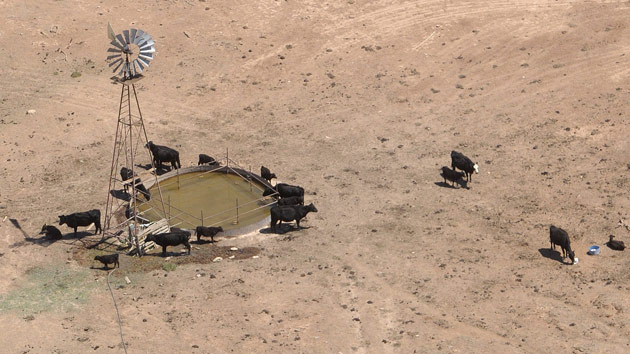 Climate change has moved from distant threat to present-day danger, and no American will be left unscathed, according to a landmark report due to be unveiled Tuesday.

The National Climate Assessment, a 1,300-page report compiled by 300 leading scientists and experts, is meant to be the definitive account of the effects of climate change on the United States. It will be formally released at a White House event and is expected to drive the remaining two years of President Obama’s environmental agenda.

The findings are expected to guide Obama as he rolls out the next and most ambitious phase of his climate change plan in June—a proposal to cut emissions from the current generation of power plants, America’s largest single source of carbon pollution.

The White House is believed to be organizing a number of events over the coming week to give the report greater exposure.

“Climate change, once considered an issue for a distant future, has moved firmly into the present,” a draft version of the report says. The evidence is visible everywhere from the top of the atmosphere to the bottom of the ocean, the report continues.

“Americans are noticing changes all around them. Summers are longer and hotter, and periods of extreme heat last longer than any living American has ever experienced. Winters are generally shorter and warmer. Rain comes in heavier downpours, though in many regions there are longer dry spells in between.”

The final wording was under review by the White House but the basic gist remained unchanged, scientists who worked on the report said.

On Sunday the UN secretary-general, Ban Ki-moon, said the world needed to try harder to combat climate change. At a meeting of UN member states in Abu Dhabi before a climate change summit in New York City on September 23, Ban said: “I am asking them to announce bold commitments and actions that will catalyze the transformative change we need. If we do not take urgent action, all our plans for increased global prosperity and security will be undone.”

Gary Yohe, an economist at Wesleyan University and vice-chair of the NCA advisory committee, said the US report would be unequivocal that the effects of climate change were occurring in real-time and were evident in every region of the country.

“One major take-home message is that just about every place in the country has observed that the climate has changed,” he told the Guardian. “It is here and happening, and we are not cherry-picking or fear-mongering.”

The draft report notes that average temperature in the United States has increased by about 1.5 degrees Fahrenheit since 1895, with more than 80 percent of that rise since 1980. The last decade was the hottest on record in the US.

Temperatures are projected to rise another 2 degrees Fahrenheit over the next few decades, the report says. In northern latitudes such as Alaska, temperatures are rising even faster.

“There is no question our climate is changing,” said Don Wuebbles, a climate scientist at the University of Illinois and a lead author of the assessment. “It is changing at a factor of 10 times more than naturally.”

Record-breaking heat—even at night—is expected to produce more drought and fuel larger and more frequent wildfires in the Southwest, the report says. The Northeast, Midwest, and Great Plains states will see an increase in heavy downpours and a greater risk of flooding.

“Parts of the country are getting wetter, parts are getting drier. All areas are getting hotter,” said Virginia Burkett, chief scientist for global change at the US Geological Survey. “The changes are not the same everywhere.”

Those living on the Atlantic seaboard, Gulf of Mexico, and Alaska who have weathered the effects of sea level rise and storm surges can expect to see more. Residents of coastal cities, especially in Florida—where there is already frequent flooding during rainstorms—can expect to see more. So can people living in inland cities sited on rivers.

Some changes are already having a measurable effect on food production and public health, the report will say.

John Balbus, senior adviser at the National Institute of Environmental Health Science and a lead author of the NCA report, said rising temperatures increased the risk of heat stroke and heat-related deaths.

Eugene Takle, convening lead author of the agriculture chapter of the NCA report and director of the climate science program at Iowa State University, said heat waves and changes in rainfall had resulted in a leveling off in wheat and corn production and would eventually cause declines.

In California, warmer winters have made it difficult to grow cherries. In the Midwest, wetter springs have delayed planting. Invasive vines such as kudzu have spread northward, from the South to the Canadian border.

Some of the effects on agriculture, such as a longer growing season, are positive. But Takle said: “By mid-century and beyond the overall impacts will be increasingly negative on most crops and livestock.”

The assessments are the American equivalent of the United Nations’ Intergovernmental Panel on Climate Change (IPCC) reports. This year’s report for the first time looks at what the United States has done to fight climate change or protect people from its consequences in the future.

Under an act of Congress the reports were supposed to be produced every four years, but no report was produced during George W Bush’s presidency.