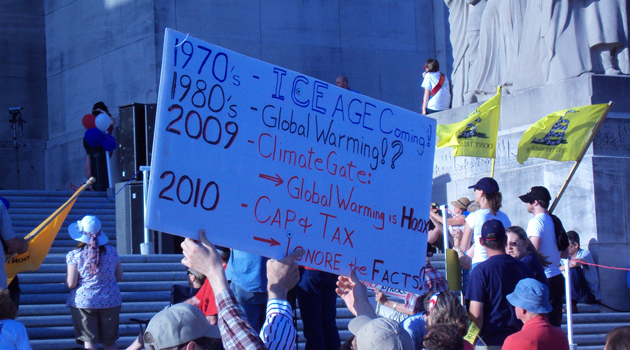 It’s one of the biggest trends in US politics over the last decade: A growing left-right split over the validity of scientific information. This “science gap” is apparent most of all on the issue of climate change, but the problem is much broader, encompassing topics ranging from evolution to the safety and effectiveness of condoms in preventing sexually transmitted diseases.

Yet even those of us who know how politicized science has become may be surprised by some new polling data out of the Carsey Institute at the University of New Hampshire. There, survey researcher Lawrence Hamilton has run a new analysis of 568 New Hampshire residents, asking them a variety of questions including the following: “Would you say that you trust, don’t trust, or are unsure about scientists as a source of information about environmental issues?” Hamilton then broke down the responses by party, separating out members of the tea party from more mainstream Republicans. And look at the result: 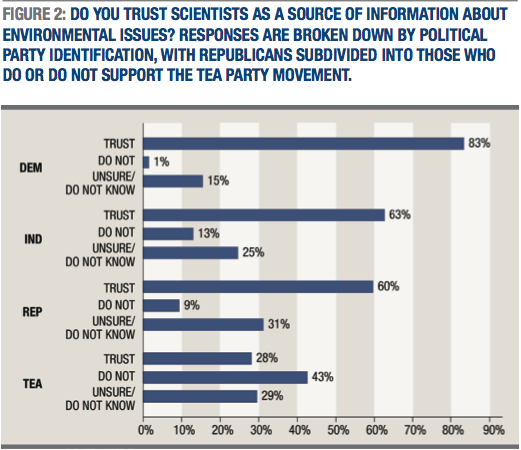 Hamilton says he’s surprised by the strength of these results. “I didn’t realize it would be at the level of division that it was,” says Hamilton. He adds that while Republicans and tea partiers in New Hampshire aren’t precisely the same in all respects as they are elsewhere in America, “in general, New Hampshire is not drastically unrepresentative.” When it comes to tea partiers and more traditional Republicans on the national level, Hamilton says that he “would expect similar gaps to show up.”

So what’s going on with this plummeting trust in scientists on the ideological right? The main factor, Hamilton thinks, is that the highly polarized climate issue is leading climate deniers to break up with scientists in general. “Climate change is sort of bleeding over into a lower trust in science across a range of issues,” says Hamilton. That means the consequences are not limited to the climate issue. “The critiques of climate science work by often arguing that science is corrupt, and then that spills over to other kinds of science,” Hamilton observes. Prior research has found that watching Fox News, in particular, leads to a declining trust in climate scientists.

The new data on trust in science comprise just one part of Hamilton’s new report. The study also looked at partisan gaps on a number of other scientific issues, and compared the size of those gaps with those that exist on non-scientific issues. And again, the result was pretty surprising: In New Hampshire, there is a bigger partisan divide over climate change and whether environmental scientists are trustworthy than there is over abortion and the death penalty. Note that in this analysis, unlike in the earlier figure, Republican responses include both those of traditional Republicans and those of tea partiers. It is the latter who are driving much of the partisan gap on issues like trust in science: 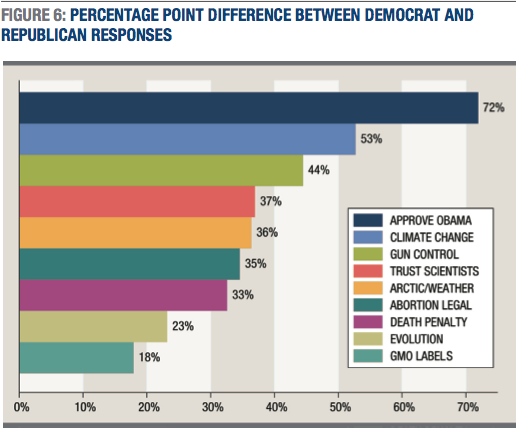 Last week, we got some of the scariest news about global warming yet: We may have already helped set in motion an irreversible destabilization of the West Antarctic ice sheet, thus locking in 10 or more feet of sea level rise over the coming centuries. It’s the kind of news that ought to serve as a wake up call for all Americans, causing them to stop and say: Enough. We’ve got to do something here.

But as these data make clear, when it comes to science, there’s no such thing as “all Americans” any more. There are highly polarized camps, divided over the very validity of the information.