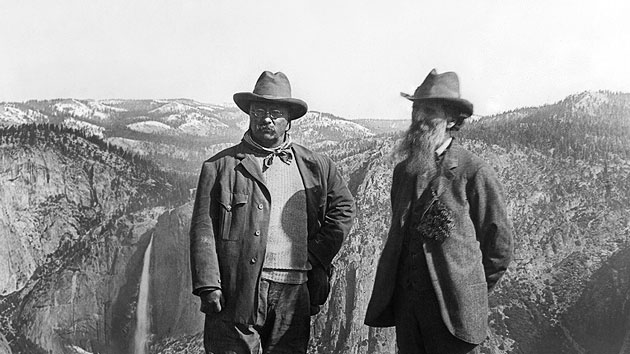 Americans are regularly told that climate change is happening here and now, in real time, and that nobody will be left unscathed. Just this week as a corporate-backed disinformation campaign continued to fuel lobbying against climate science and on behalf of a failed vote on the Keystone XL pipeline, the White House released a landmark climate change report, underlining that “certain people and communities are especially vulnerable, including children, the elderly, the sick, the poor, and some communities of color.” According to the even more landmark IPCC report, that goes for the developing world and rich countries alike.

Just the other day, the National Wildlife Federation announced its new president—a white male “whiz kid”. Last month, the Climate Reality Project, founded by Al Gore, replaced its female chief executive with a white man. Last November, the National Parks and Conservation Association replaced its veteran leader with another white male. The Union of Concerned Scientists is due to announce its new leader as early as next week. Spoiler alert: it’s not going to be a woman.

Public opinion research in the US suggests women, Latinos, African-Americans, Asians and Native Americans are more concerned—and more directly affected—by climate change than other populations. Doesn’t it make sense to include those who are most at risk in decisions about how we fight the defining challenge of our time?

Now take a look at the top executives at eight of the top 10 groups devoted to fighting that fight:

Friends of the Earth? White male.

The very top of “Big Green” is as white and male as a Tea Party meet-up. It doesn’t look like change. It doesn’t even look like America. So is it any wonder environmental groups are having trouble connecting with the public on climate change? Corporate and conservative funding of climate denial is one thing, but it’s beyond past time for the leaders of this movement to look at how their choice in leadership is affecting their strategy and messaging.

It’s not as if there haven’t been opportunities: the last few years have seen a generational change as more and more founding activists of the 1970s have retired. But rather than embrace the turnover as a chance to make change, we have exceptions to the old-white-man rule:

Set aside for a moment the equality-in-the-boardroom part. America is in the midst of a demographic transformation. By mid-century—as the effects of climate change really begin to bite—whites will no longer be the majority population. In California, Latinos became the single biggest ethnic/racial population last March.

And yet the environmental groups that are calling for sweeping changes to the economy—moving away from oil and coal to carbon-free sources of energy—seem incapable of making a transition themselves.

“The community should challenge itself in the same way that it challenges corporate America to change the business-as-usual trend,” Kalee Kreider, a former environmental advisor to Al Gore, wrote me in an email. “It’s well past time for the environmental movement to look more like America and the world.”

That gap between activists and Americans has resulted in some bad decisions. In 2009, with Obama in the White House and Democrats controlling both houses of Congress, Big Green took a roll on the once-in-a-generation chance of trying to pass climate change legislation. Their strategy? Engage in a series of clubby, back-room negotiations with the chief executives of oil and utility companies to reach a deal that achieved some carbon cuts—while limiting the costs to big business. The insider deal suffered a spectacular collapse.

Then there’s the messaging. Environmental groups are only now beginning to wake up to the idea that bombarding the public with graphs and statistics is not, on its own, going to persuade people that climate change has anything to do with their own lives.

Meanwhile, beyond Washington, and beyond the male-dominated preserves of Big Green, women activists are just getting on with the job—without that White House access or the expensive consultants paid for by the biggest of big donors.

It’s worth remembering that one of the biggest victories for the environmental movement in recent years—last month’s indefinite delay on the Keystone XL pipeline—was achieved thanks to the efforts of Bold Nebraska, a tiny environmental group with just three paid staffers, which assembled an unlikely coalition of ranchers, Native Americans and other activists operating in one of the country’s most conservative states.

The president of Bold Nebraska who was so instrumental to that breakthrough? Why, that would be one Jane Fleming Kleeb.