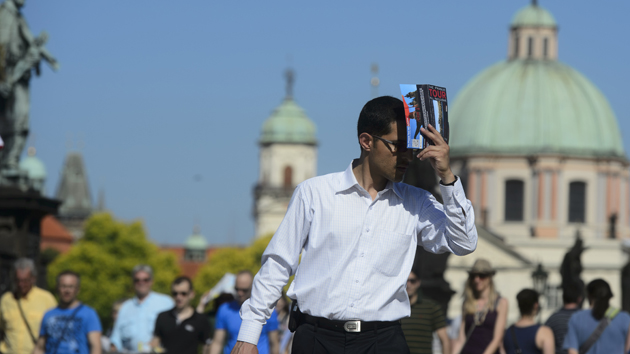 A man in Prague reacts to the heat wave currently hitting the Czech Republic. According to Radio Prague, "forty-four out of 135 stations reported record highs" on Sunday. Michal Kamaryt/ZUMA

We’re hearing more and more about our pending global El Niño. NOAA now says the odds are 70 percent that we’ll have an El Niño event develop by this summer, and even higher after that. Other experts put the odds higher still. What’s more, the ocean and atmosphere have recently been behaving in a rather El Niño-like manner: Record-breaking Hurricane Amanda recently formed in the northeastern Pacific basin, which tends to be a very active hurricane region in El Niño years.

El Niño, if it develops, will upend everybody’s weather—but it may also have another impact: Driving up global temperatures. El Niño, after all, is a global weather phenomenon whose most notable characteristic is the presence of extra-warm surface water in the central and eastern equatorial Pacific ocean. This tends to unlock greater average global temperatures, notes Joseph Romm of Climate Progress.

Or as climate expert Michael Mann of Penn State helpfully explained by email: “Global temperature variations can be thought of as waves on a rising tide. The rising tide is global warming, which has raised global temperatures nearly a degree C (1.5 F) over the past century. The waves are the shorter-term natural fluctuations related to phenomena like El Niño (or its flip-side, La Niña), which warm (or cool) the globe, respectively, by 0.1-0.2C.”

Here’s a figure from the World Meteorological Organization showing global temperature anomalies since 1950, with years that began with an El Niño event already active highlighted in red. As you can see, these are some of the warmest years: 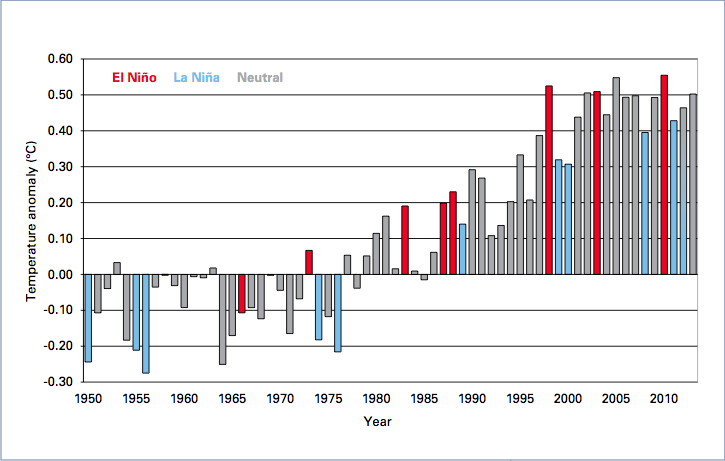 What’s more, even before the recent news about the likely development of El Niño conditions, climate experts saw a chance for 2014 to be a record temperature year, simply because temperatures continue to tick upwards. “I would have said likely top 5 if asked at the beginning of this year,” says Gavin Schmidt, the newly named director of the NASA-Goddard Institute for Space Studies, one of the leading scientific agencies that tracks global temperatures and ranks them by year. “And the incipient/potential El Niño strengthens that.”

That’s bad news for climate skeptics. After all, by now we’ve all heard the claim that global warming has “stopped” or is “slowing down.”

As we’ve explained before, this misleading assertion relies heavily on the fact that the year 1998 was a very, very warm year, due to a strong El Niño event. If you cherry-pick the beginning of your time series, and start with a very hot year, you can make it look as though global temperatures aren’t rising so fast. But the reality is that, as the World Meteorological Organization notes, “each of the last three decades has been warmer than the previous one, culminating with 2001-2010 as the warmest decade on record.”

But as soon as the globe sets another temperature record, the global warming “slowdown” talking point becomes a lot less compelling. At that point, climate skeptics will have a few options: Either they can finally accept the overwhelming body of evidence that global warming is real, or they can come up with a new cherry-picked counter argument. Want to guess which one they’ll choose?