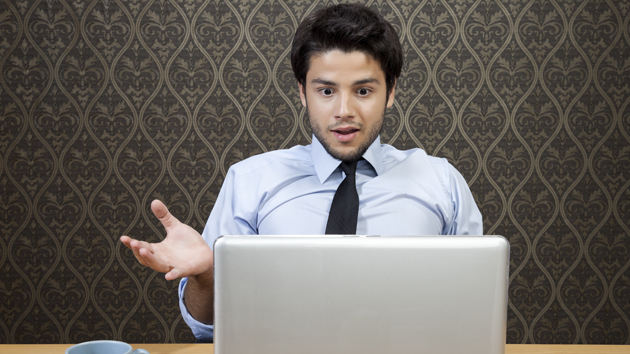 It’s no secret that different countries have different densities, so to speak, of global warming denial. In particular, English-language speaking nations like the US and the UK tend to be relative denialist hotbeds, and their media include a considerable amount of global warming skepticism. By contrast, media researchers have found that in Spanish-speaking countries like Mexico and Chile, as well as in European nations, journalists tend to cast much less doubt on climate research.

And now, a new paper captures the US media’s relative discomfort with climate science in a new way: By comparing the preponderance of words that suggest scientific uncertainty about climate change in two US newspapers, the New York Times and the Wall Street Journal, with the concentration in two Spanish ones, El País and El Mundo. The study, by Adriana Bailey and two colleagues at the University of Colorado-Boulder, is just out in the journal Environmental Communication. It finds a considerably greater concentration of such uncertainty-evoking words in the US papers in their 2001 and 2007 coverage of two newly released reports from the United Nations’ Intergovernmental Panel on Climate Change.

The study used a technique of linguistic analysis that involved examining newspaper articles for “epistemic markers,” defined as “any words or expressions suggesting room for doubt” about climate science. Obviously, there are many, many such words and phrases, and the list of terms considered was quite exhaustive, ultimately comprising 10 separate grammatical categories. In English, terms suggesting uncertainty ranged from “common hedging verbs” (believe, consider, and appear) to “synonyms for uncertain” (blurry, inaccurate, and speculative).

For an example of how the analysis worked, consider this January 1, 2007 New York Times article by Andrew Revkin. In the phrase “substantial uncertainty still clouds projections of important impacts,” the underlined words were all counted as epistemic markers. (Revkin was referring in particular to forecasts about the rate of sea level rise from melting ice sheets.) Clearly, journalists have no choice but to use these words and phrases sometimes in their writing about climate change. But the study looked at the aggregate volume of their use—and that’s where the difference between the two countries showed up. 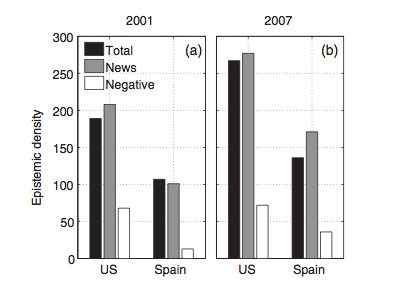 The number of hedging words per 1000 words in US and Spanish papers in 2001 and 2007. The analysis shows “total” articles (which includes opinion pieces), “news” articles only, and “negative” hedging words, those with a tone that suggested strongly that climate science is questionable. Reprinted from Bailey et al (2014), “How Grammatical Choice Shapes Media Representations of Climate (Un)certainty,” Environmental Communication.

The study specifically analyzed the “density” of these hedging words or phrases, or the number of them per 10,000 words in the American and Spanish papers. The result confirmed the researchers’ expectations. As they write, “The density of epistemic markers in US newspapers significantly exceeded the density of epistemic markers in Spanish newspapers during both 2001 (189 vs. 107) and 2007 (267 vs. 136).” “US papers are hedging more than the Spanish papers,” says Adriana Bailey, the study’s lead author and a Ph.D. student at the University of Colorado-Boulder. Somewhat surprisingly, there was actually more hedging in news articles than in opinion pieces for both years in the US papers.

The study contained several other troubling findings as well. As suggested by the figure at right, the total “epistemic density” of US articles in actually increased from 2001 to 2007, even as scientific uncertainty about climate science declined. “Contrary to expectation, we saw increases in hedging, or constant amounts of hedging, in all four papers we analyzed,” says Bailey.

Here’s why that’s so odd. This was, after all, the period in which the IPCC went from saying it is “likely” that humans are driving global warming, to saying it is “very likely.” Yet hedging was more prevalent in the latter time period, not less. What’s more, it looks as though the increase in hedging words in US papers from 2001 to 2007 occurred solely at the New York Times—where it grew from 141 words in 10,000 to 297 in 10,000—even as the Wall Street Journal did not show a change over time (236 words versus 235 words per 10,000). (The study did not examine how papers covered the 2013 release of the IPCC’s Fifth Assessment Report, which jacked up the scientific certainty even further.)

And there was one more finding of note. The researchers specifically categorized the uncertainty-laden terms by tone, so that more neutral words, like “estimate,” were separated out from clearly negative ones, words that forcefully suggested that the science of climate change is dubious. Take, for instance, this 2001 Wall Street Journal commentary: “We don’t know whether temperatures will continue to rise,” it reads at one point. The underlined words here were both scored as epistemic markers, but the bolded word was scored as a negative one. In the New York Times and in El Mundo, the proportion of negative markers increased over time from 2001 to 2007, a change that the authors note suggests “a real shift towards more negative language rather than a simple increase in overall hedging.” In general, US papers also had more negative markers overall than Spanish papers did.

Recent research suggests that through the very language they use to express the certainty of their conclusions—confusing terms such as “likely” and “very likely”—climate scientists, themselves, sow doubt in the minds of the public about their findings. The new study, then, in effect finds a double whammy: US journalists then go on to amplify that sense of uncertainty through their own use of hedging language.

No wonder we are still arguing about the reality of climate change…in this country.