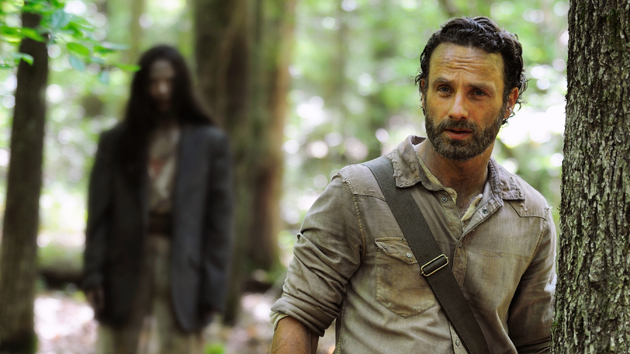 Spoiler alert: This article contains a major spoiler if you have not yet watched Season 4 of “Game of Thrones” on HBO.

Remember those stick-figures of chemical compounds you were forced to memorize in high school? Remember how useless it seemed at the time? Can you still articulate the difference between a covalent bond and an ionic one (without checking Wikipedia)? If not, pay attention: You might be caught flat-footed during the zombie apocalypse.

The CDC suggests (half-seriously) having a zombie-preparedness kit (after all, it would also be useful in case of pandemics and hurricanes). But chemist and blogger Raychelle Burks has a simpler solution—one that would have greatly de-grossified a famous scene from The Walking Dead, in which Rick and his fellow apocalypse survivors slathered the guts of dead humans all over themselves, to jam the zombies’ chemosenses with the smell of rotting flesh and thereby, escape. 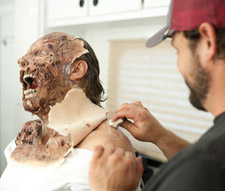 “They used chemical camouflage,” explains Burks, to trick the zombies into thinking they were fellow undead. The only problem: Icky and dangerous exposure to blood, guts, and pathogens. Burks has a better idea. “There’s a couple of key chemicals that smell really stinky,” she explains on the latest installment of the Inquiring Minds podcast. “Two right off the top would be—and they’ve got great names—cadaverine and putrescine…and they do smell like their names.” In fact, these chemicals  are used to train cadaver dogs, which search for dead bodies. “You could make up a death cologne,” Burks continues. “Kind of use chemical camouflage to your advantage so that you can sneak through a zombie horde.”

Known as Dr. Rubidium on Twitter—a name she chose because element 37 of the periodic table, Rubidium, has the symbol “RB,” the same as her initials—Burks is a self-described “magical unicorn“: A black, female, analytical chemist working at Nebraska’s Doane College. Professionally, much of her research has focused on how to create quick chemical tests to help law enforcement officials detect the presence of explosives, and particularly those that are peroxide based, which are both extremely dangerous, and also fairly easy to make. “In the last 10 to 15 years, their use in nefarious activities, if you will, has really increased,” says Burks.

On Inquiring Minds, Burks discussed a wide range of chemistry-related topics, including the widespread confusion over terms like “natural,” “organic,” and “chemical.” Brief primer: “chemical” doesn’t necessarily mean bad; the scientific meaning of “organic” is completely different from how it’s used to label food; and “natural” doesn’t actually mean good or safe, or even non-synthetic. After all, in many cases we find beneficial natural compounds and then proceed to synthesize them in the laboratory because they’re so useful and in such demand—mint and caffeine come to mind. 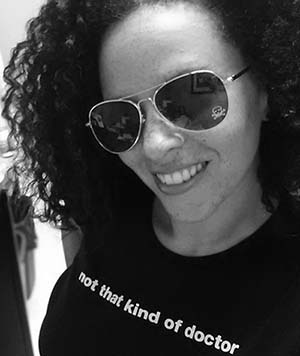 “I wonder sometimes if we’re trafficking on fear, companies that are saying, ‘Oh, this has all natural ingredients,'” says Burks.

Burks’ passion for demonstrating the real-world applications of chemistry extends well beyond these observations—or her academic research. So let’s go in depth into some of the more surprising lessons that Burks derives from chemistry, starting with those of us who someday may need to walk through an army of zombies.

According to Burks, a powerful chemical concoction that mimics the smell of rotting flesh (“Eau de Death,” she calls it) can be synthesized using three chemical compounds. They include the aforementioned cadaverine and putrescine—which are produced naturally during the decomposition of the human body—but Burks also suggests adding methanethiol, or the smell of rotting eggs, for added pungency.

All three chemicals are relatively easy to produce in mass quantities by enlisting the help of the common bacterium Escherichia coli. Once the compounds are synthesized, we’d simply need to find a vehicle for application, which would transform the perfume industry from purveyor of unnecessary luxury to the producer of a species-saving staple.

Watch this video, produced by the American Chemical Society, for a more detailed explanation from Burks:

But as we’ve described in a previous episode of Inquiring Minds, knowledge of chemistry is just as useful (if not more so) if the goal is to take, rather than to save, life. Using another popular TV show, Game of Thrones, Burks once again demonstrates how chemistry plays a starring role, this time satisfying the desire for revenge felt by millions of viewers with the long-deserved death of the supremely enraging character, King Joffrey.

The cathartic scene was based on the fictional story written by George R.R. Martin, of course, but can we employ chemistry to figure out precisely which poison was used? Martin’s Westeros and Essos are fantasy worlds, and there’s no guarantee that their chemistry is the same of ours (there is, after all, magic to take into consideration). But nonetheless, Burks thinks we can at least get close.

First, she notes that according to A Clash of Kings, the second novel in Martin’s series, the poison involved, called “The Strangler,” comes from “a certain plant that grew only on the islands of the Jade Sea, half a world away,” and that when “dissolved in wine, it would make the muscles of a man’s throat clench tighter than any fist, shutting off his windpipe.” So what’s the real world analogy?

Burks first narrows the field down to naturally occurring plant-based poisons that work on human muscles: belladonna, hemlock and strychnine. All three are alkaloids, chemical compounds that share a common feature—one or more nitrogen atoms in a heterocyclic ring. What’s so special about alkaloids? For one thing, they are a source of nitrogen, an element essential to all forms of life: it’s one of the building blocks of amino and nucleic acids that make up our DNA. Perhaps as a result, many alkaloids are toxic to humans and other animals in high enough doses, including caffeine, nicotine, cocaine, and of course our three candidate poisons.

The alkaloids derived from belladonna and hemlock tend to relax muscles and thereby cause paralysis. But strychnine preferentially targets the striated muscles of the neck and chest, producing the opposite effect. “It causes the muscles to violently contract, and sometimes so violently, that the muscle is ripped from the bone,” says Burks. That makes it the likeliest analogue to the poison that killed Joffrey.

Not satisfied with simply explaining the type of death that might result from poisoning by strychnine, though, Burks goes a step further and analyzes whether Martin’s description of how the poison is prepared might also fit. His recipe notes that the plant had to be “soaked in a wash of limes and sugar water and certain rare spices” in order to concoct the poisonous potion. While limes might not be acidic enough to pull out the alkaloid, Burks wonders whether Martin might in fact be referring to a chemical compound called quicklime. “This lime has been used as part of multi-step processes to extract alkaloids from leaves—like the alkaloid cocaine from coca leaves or the alkaloid morphine from opium,” writes Burks on her blog on Scientopia. What about the sugar and spice? Strychnine has a bitter taste that needs to be masked. Sweet-tasting mulled wine, like the kind in King Joffrey’s cup just before he dies, would make a perfect vehicle.

Not that this is necessarily the poison used in Martin’s fantasy world—Burks notes that it isn’t a “perfect match.” But, “that’s the fun part,” says Burks. “Being able to read these fantasy novels, or sci-fi and horror, and think: Hey, how could we really do that?”

“You get to play detective—scientific detective,” says Burks. “And it gets people really thinking.”

For the full Inquiring Minds interview with Raychelle Burks, you can stream below:

This episode of Inquiring Minds, a podcast hosted by neuroscientist and musician Indre Viskontas and best-selling author Chris Mooney, also features a discussion of a controversial study concluding that hurricanes with female names are deadlier, as well as new research into how spiders use their webs to detect sound vibrations.