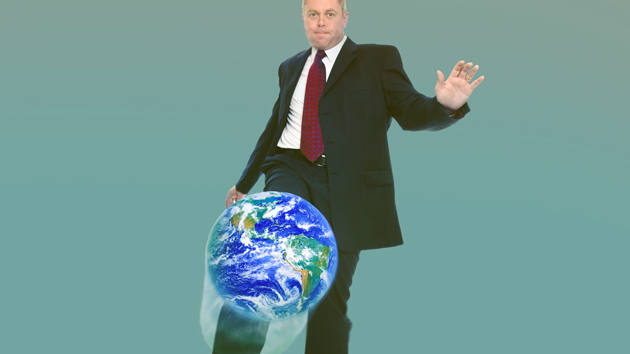 It’s one of those facts that sweeps you back into an alien, almost unrecognizable era. On July 9, 1970, Republican President Richard Nixon announced to Congress his plans to create the Environmental Protection Agency and the National Oceanic and Atmospheric Administration. By the end of that year, both agencies were a reality. Nowadays, among their other tasks, they either monitor or seek to mitigate the problem of global warming—actions that make today’s Republicans, Nixon’s heirs, completely livid.

To give one example of how anti-environment the right today is, just consider this ThinkProgress analysis, finding that “over 58 percent” of congressional Republicans refuse to accept the science of climate change.

So what happened to the GOP, from the time of Nixon to the present, to turn an environmental leader into an environmental retrograde? According to a new study in the journal Social Science Research, the key change actually began around the year 1991—when the Soviet Union fell. “The conservative movement replaced the ‘Red Scare’ with a new ‘Green Scare’ and became increasingly hostile to environmental protection at that time,” argues sociologist Aaron McCright of Michigan State University and two colleagues.

So is that causal explanation right? Before getting to that question, let’s examine the study itself.

For starters, it is pretty much undebatable that Americans today are polarized over environmental issues. In a figure in their paper, McCright and his colleagues visualize this polarization by charting the average League of Conservation Voters environmental scores for congressional Democrats and Republicans from 1970 through 2013: 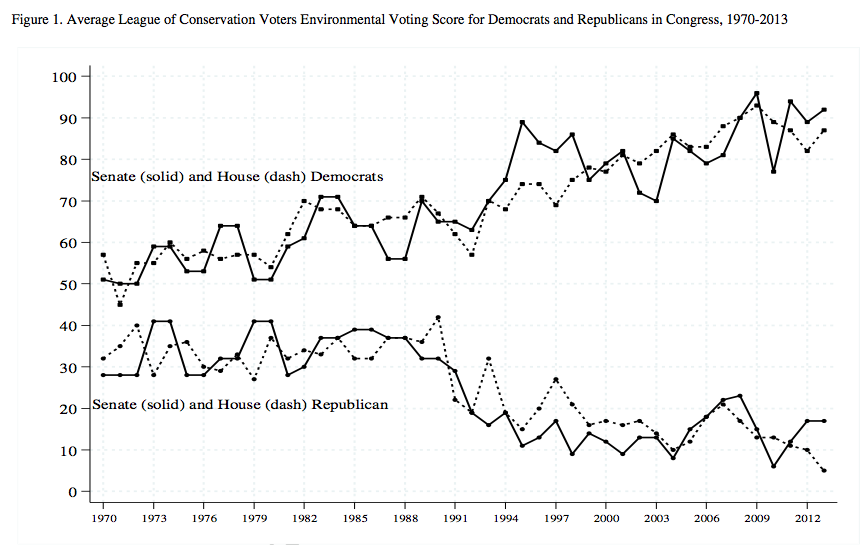 This figure suggests that the key left-right break point on the environment occurred sometime in the early 1990s. So does the analysis at the center of the new paper: a look at how Americans belonging to different political parties have answered the same General Social Survey question about the environment going back to the year 1974. In that year and at regular intervals ever since, the GSS has asked the following question:

We are faced with many problems in this country, none of which can be solved easily or inexpensively. I’m going to name some of these problems, and for each one I’d like you to tell me whether you think we’re spending too much money on it, too little money, or about the right amount.

One of the items then listed is “the environment” or “improving and protecting the environment.” Here’s how many Americans responded to that question over time by saying that we’re spending “too little” on environmental protection, separated by political party membership: 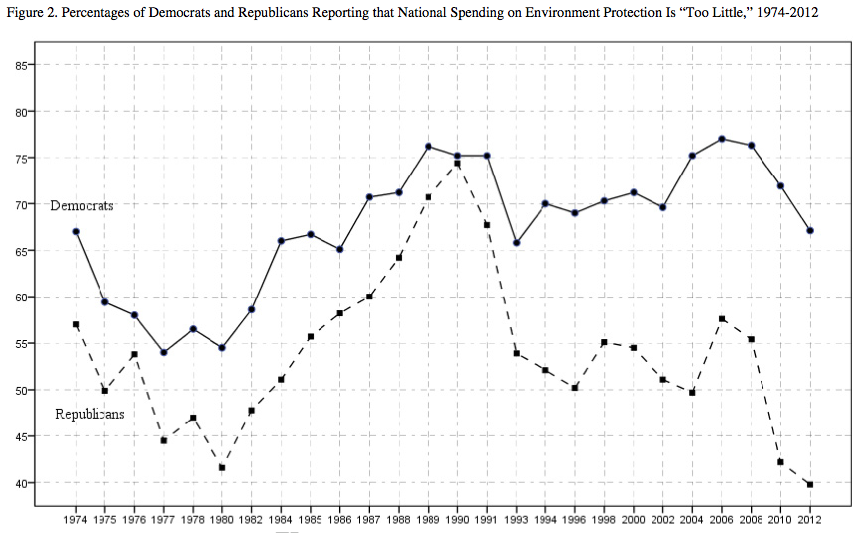 So what happened in the early 1990s? Well, for one thing, Bill Clinton was elected, flanked by a vice president, Al Gore, who had just published a book called Earth in the Balance. That made environmental issues salient in a very political way.

And then, there was the once super-intense fight over habitat protections for the northern spotted owl. Remember that?

But this is not the only possible explanation for the trends noted above. There has been a great deal of research on why American politics have become so polarized (on all issues, not just environmental ones), and theories to explain the trend abound. For instance, one major factor is clearly “party sorting“—the idea that conservatives have moved more into the GOP over time, even as liberals have, at least to some extent, coalesced in the Democratic Party. So, the Republicans answering a General Social Survey question about the environment in 1996 or so simply were not the same bunch of people who were answering it in 1974.

One intriguing related hypothesis posits that the right wing has become more unwilling to compromise in general because it has become more psychologically authoritarian—closed-minded, prone to black-and-white thinking. That’s not a pattern that would uniquely affect environmental issues, though. If anything, it would be felt most strongly on the topics that authoritarians most care about: crime, national defense, religion in public life, and matters of that ilk.

Whatever the cause, the consequence is clear: We can’t get anything done in a bipartisan way on the environment any longer. “The situation,” conclude the authors, “does not bode well for our nation’s ability to deal effectively with the wide range of environmental problems—from local toxics to global climate change—we currently face.”