On September 15, Cambodian police detained 11 environmental activists for blocking a convoy of government vehicles headed for Areng Valley, the site of the controversial Stung Cheay Areng hydro dam project. The activists were released, but 12 Royal Cambodian Armed Forces officers are now stationed at the makeshift roadblock where villagers have been protesting the dam since March. Nothing now stands in the way of Sinohydro Resources, the Chinese company that the Cambodian government has contracted to construct the dam.

Earlier this year, my film crew and I traveled to Areng Valley to document the story of the Chong people and their fight to stop this proposed dam, which they fear will destroy their forests, livelihood, and heritage. The Chong, who are considered Khmer Daeum (or original Khmers), have lived, farmed, fished, and hunted in this valley for more than 600 years. At a protest, one woman expressed her purpose clearly: “We’ve come to protect our land for our future grandchildren. And we’re afraid all our spirit forests will be lost.”

If built, the Stung Cheay Areng dam would flood at least 26,000 acres or 40 square miles (some estimates say 77 square miles)—displacing more than 1,500 people who have no desire to leave their ancestral homes. The government plans to forcibly resettle them within the Central Cardamom Protected Forest, a vital elephant corridor, causing further encroachment on an area internationally recognized as a biodiversity hotspot. The dam would thereby threaten the habitats of 31 endangered animals, including the world’s largest habitat for the threatened Siamese crocodiles.

“We’ve come to protect our land for our future grandchildren. And we’re afraid all our spirit forests will be lost.”

Conservation experts also question the project’s economic viability, citing high production costs and a very low rate of economic return. During the rainy season, the dam is hypothetically capable of producing enough electricity to power some 87,000 US-style homes. But, according to Ame Trandem, Southeast Asia Program Director for International Rivers, “the dam will only operate at 46 percent capacity during the dry season, precisely when Cambodia most needs the electricity.”

The proposed Stung Cheay Areng dam is one of 17 the Cambodian government intends to build over the next 20 years to tackle the country’s energy crisis. The dam building spree is prompted by some of the highest electricity prices in Asia. But Cambodia will sell most of the power to neighboring countries like Thailand, Vietnam, and Laos. And, as a US State Department cable obtained by WikiLeaks indicates, “the proposed dams’ construction and maintenance contracts will funnel near and mid-term profits to foreign construction companies.”

As with all large hydro dams being built in the country, Sinohydro will transfer ownership of the Areng dam to the Cambodian government in 40 years, just as maintenance costs spike and substantial sediment build-up is predicted to render the dam nearly inoperative. Many of the dams so far built are poorly constructed; the Stung Atay dam, located not too far from Areng, collapsed mid-construction in December 2012, killing four workers.

“Cambodia’s hydropower ambitions are not new, but China’s substantial foreign aid in the form of grants and soft loans has driven much of the recent progress,” the WikiLeaks cable notes. Indeed, Sinohydro is the third company the Cambodian government approached to build this dam. Two Chinese companies that conducted feasibility studies pulled out of the project. The first company discontinued its involvement on moral grounds, citing issues of corporate social responsibility; the environmental and social impacts are irreversible and cannot be mitigated. The last company to bail concluded the dam was “economically unviable.”

So then why is the Cambodian government so eager to pursue this project? According to a Phnom Penh Post investigation, one of the country’s wealthiest and most politically powerful couples—Cambodian People’s Party senator Lao Meng Khin and his wife, Choeung Sopheap—are believed to have brokered the deal between Sinohydro and the Cambodian government. This would not be their first foray into environmental devastation for profit. The couple are the owners of Shukaku Inc., the company behind the controversial Beoung Kak Lake development in Phnom Penh, which has forcibly evicted and displaced over 1,500 families. They also own Pheapimex Group, a controversial development firm responsible for the land seizure of hundreds of thousands of acres of forest and farmland in Cambodia.

“China’s substantial foreign aid in the form of grants and soft loans has driven much of the recent progress,” the WikiLeaks cable notes.

Furthermore, the couple is connected to powerful logging syndicates that stand to benefit from the dam project. The construction will provide unhindered access to the Central Cardamom Protected Forest, building roads where none currently exist, and sending loggers deeper into the forests in search of rosewood, a highly prized luxury hardwood. Logging is technically not permitted in protected areas, but activists fear that timber will find its way onto trucks in the concession area. At that point, as one conservation activist noted, it is as if “the timber has already reached Vietnam.” When the Stung Atay dam was built, conservation experts estimated 1,300 cubic yards of rosewood would be harvested. However, in actuality, at least 20,000 cubic yards were harvested, netting approximately $220 million in profit for timber companies. Experts expect the total area deforested in this project would almost equal that of the combined surface area cleared in four existing dam projects in the Cardamoms.

The loggers are often poor migrants who have themselves been displaced by the destruction of their forests and farmland. Continuing this cycle of devastation they receive temporary permits to enter the forests and clear land, supplying luxury timber to logging tycoons. Once the land is cleared, it will never be reforested. Businessmen will snap it up for development. Meanwhile, local, indigenous communities are pushed deeper and deeper into protected areas, where they will, of necessity, place demands on previously pristine forest and wildlife habitats. According to a Global Witness report, since 2003, 400,000 Cambodians have been harmed by economic land concessions granted to companies for industrial agriculture or dam construction. More than 70 percent of the concessions in 2012 were situated inside national parks, wildlife sanctuaries, and protected forests.

A panel of Sinohydro experts recently approved the technical feasibility of the project. The Cambodian government is expected to waive through the dam’s environmental impact assessment, allowing Sinohydro to begin construction.

Meanwhile, local NGOs like Mother Nature and Khmer Youth Empire continue to wage an empowering social-media campaign against the dam and rallying protests in Phnom Penh. International environmental organizations like International Rivers, Conservation International, and Wildlife Alliance are also exerting pressure on the Cambodian government and Chinese companies to pull out.

Villagers in Areng, dedicated to stopping the dam, vow to continue blocking the sole access road into the valley. One woman vehemently expressed it thus: “Even if they piled money one meter above my head, I don’t want their Chinese money. I want to stay in my village. Even with all this money, I could only spend it in this life. I wouldn’t be able to pass it on to my grandchildren. I just want my village and my land for the future of my grandchildren.”

And they just might be successful. On October 1, the leader of the opposition Cambodia National Rescue Party, Sam Rainsy, said he’d been assured by Prime Minister Hun Sen that the activists call for a moratorium had been heeded. The dam would be put on the back burner for the foreseeable future, it’s fate left to “future generations” to decide. However, the minister of mines and energy has continued to insist that the dam will be completed by 2020 while the minister of environment assured that the dam had not been canceled and nor had construction been postponed. It remains to be seen which party in this complicated fight over land and money and tradition will win out. 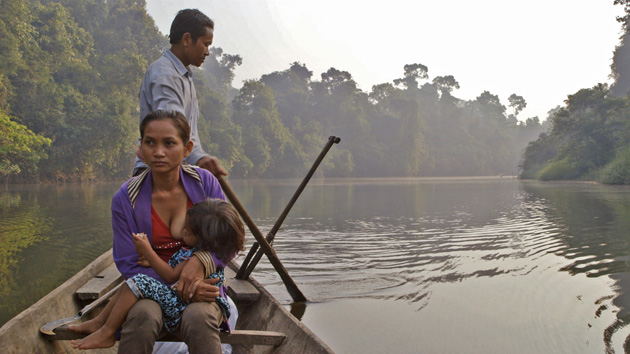 This project was made possible by a grant from the Kendeda Fund, the Pulitzer Center on Crisis Reporting, and the Sundance Institute Artist Services Program. The film was originally produced for the New York Times Op-Docs.