Last week, as part of the Bay Area Science Festival, I had the chance to interview Mythbusters host and producer Adam Savage for a live episode of the Inquiring Minds podcast. Savage is a science evangelist, and he’s been instrumental in educating huge numbers of people on how science works and why it’s so much fun. The longevity and popularity of Mythbusters has elevated him to rock star status—his live show, Mythbusters: Behind the Myths, is scheduled to play this year in dozens of large venues across the country.

Savage’s success comes partly from his passion for building and testing stuff (and blowing it up), but it also comes from being, well, a good person—and from engaging thoughtfully with issues that many people in his line of work tend to ignore. When I asked him how he could use his big-time influence as a TV star and science communicator to make sure women are better represented in his field, it was clear that it was something he had already been thinking about.

“The problem I have is that I’m a white dude,” Savage said. “And I recognize that my privilege makes it impossible for me to say, ‘There should be more women in science’ without sounding like I’m proclaiming from on high. And so I take that position seriously.” But, he added, “I bring women into the things I’m doing because they absolutely are part and parcel of all of the storytelling and the science and the scientific discovery that we do. And little girls need more role models in critical thinking. Absolutely. But I also recognize that that’s not me…I could be a little girl’s role model, but I’m not going to be her ideal role model. She needs a woman to do that.”

“I guess that’s a long way of saying I’m not really sure,” he said. “I’m always looking at ways to do that.” 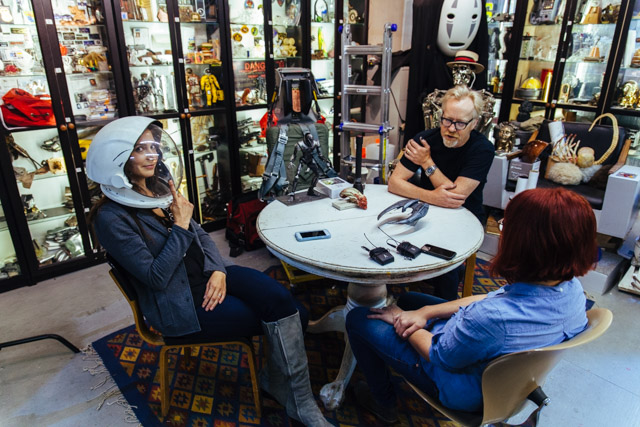 “Shit’s tough for girls—I’m really sorry about that,” he said, adding that he’s been following the controversy surrounding #Gamergate—the online culture war that has been rocking the video game industry and has involved harassment and violent threats against women. In a follow-up interview at his workshop (watch the video above), I asked Savage why he thinks there’s so much rage directed at women in the gaming community.

In short, he’s not sure. But he says he’s seen sexism directed at other women in science and tech, including at former Mythbusters star Kari Byron. “I wish I understood it better,” he says. “Because I see it, and I have friends that suffer from it. And I worked with Kari Byron for 11 years, and I’ve watched the evolution of the terrible shit Kari’s had to deal with as a public figure and a woman and a science communicator.”

With the caveat that he’s “psychoanalyzing people” he’s never met, Savage suggests the problem is exacerbated by consumer cultural and media portrayals of women. “I have to imagine that our culture is constantly promoting impossible ideals,” he says. “Ideals of ownership, ideals of success, and ideals of body type. And women have suffered mightily from Hollywood’s ideas of what women should look [like].” Savage should know—he’s been in Hollywood for more than a decade. “It’s part and parcel of a deeply nihilistic view of consumer culture,” he says. “I deeply love the brands that I love…I’m deeply addicted to it at the same time as I recognize it promotes some terrible ideas about what’s possible and what could make you happy.”

“Really at its base, all anyone wants is to be happy and to be fulfilled,” he adds. “And it’s genuinely sad that there’s a group out there that feels so unfulfilled that they feel the drive to push their lack of fulfillment outwards. Right? ‘I want to deny things to you…because I feel denied.’ That’s terrible.”

You can hear more of Savage’s thoughts—on everything from street harassment to electronics to the future of intellectual property law—by listening to Inquiring Minds below, or by subscribing on iTunes or via RSS.