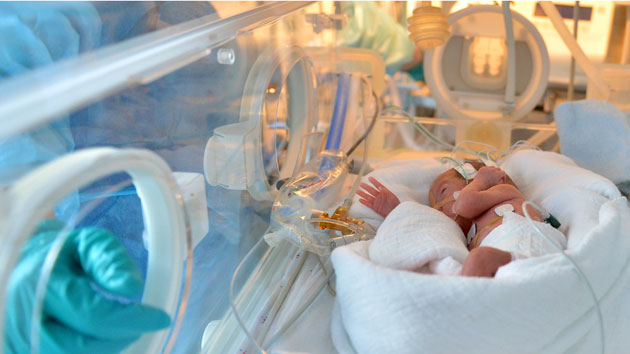 Dr. Eric Mallow, a neonatologist and researcher at the Johns Hopkins Bloomberg School of Public Health, has long suspected that preterm infants are being overexposed to chemicals in the plastic medical equipment intended to nurse them to health.

Phthalate plasticizers are chemicals added to plastics to make them durable and pliable, and Mallow was concerned about a chemical called DEHP. The only phthalate plasticizer allowed in medical equipment, it helps soften breathing tubes, intravenous (IV) lines, fluid bags, and catheters. Mallow had read studies showing overexposure to DEHP to be associated not only with hormonal disruption (similar to the effect of BPA, another plasticizer) but with nonhormonal effects like liver damage, a problem common in preemies. He had noticed that if a breathing tube was in a patient for a long time, it came out stiffer than when he put it in. DEHP, which doesn’t chemically bind to the plastic of the tube, had leaked out.

In a study published today in Nature’s Journal of Perinatology, Dr. Mallow and Johns Hopkins colleague Dr. Mary Fox present an alarming conclusion: The “daily intake of DEHP for critically ill preterm infants is on the order of 4,000 and 160,000 times higher than desired to avoid reproductive and hepatic [liver-related] toxicities, respectively.” In other words, sick preemies are regularly exposed to levels of DEHP—in breathing tubes, feeding tubes, catheters, IVs, and blood storage bags—that are thousands of times higher than have been deemed safe for infants.

Furthermore, when Mallow and Fox analyzed published studies on the effects of DEHP, they found that in lab animals, exposure to the plasticizer caused health problems similar to complications that preemies often experience. One example: A 2007 study by researchers at the University of Marburg found that rabbits receiving a fat mixture through a plastic tube containing DEHP—in the same way that many preterm infants do—were far more likely to experience liver damage than those rabbits that received the same emulsion through a DEHP-free tube. The researchers concluded that DEHP is “likely” responsible for the liver and gall bladder damage that is common, and sometimes fatal, among preterm infants who receive nutrients intravenously. Mallow and Fox walk readers through several more studies showing similarities between the lung, eye, and liver damage of animals exposed to DEHP and the parallel symptoms common among preterm infants.

The study exposes a gaping loophole in the regulation of DEHP: While federal law bans childcare products and toys for kids from containing more than 0.1 percent phthalate content, there is no upper limit on the DEHP in medical equipment; some flexible plastic tubing in hospitals contains as much as 40 percent DEHP. And, Mallow points out, “fluids are running through [the equipment] and blood is being stored in it. The way the product is used guarantees that there’s substantial exposure.”

While federal law bans childcare products and toys for kids from containing more than 0.1 percent phthalate content, some flexible plastic tubing in hospitals contains as much as 40 percent DEHP.

Medical equipment for adults also contains plasticizers, but because preemies are so much smaller, they have relatively higher exposure rates; a sick preemie who is on a ventilator and receiving blood and nutrients from an IV line takes in about 16 mg per kg of body weight per day. When coupled with the fact that infants can spend weeks or months in treatment in a NICU, you have a “sick and developmentally vulnerable” population, says Mallow.

“We were floored by how high the exposures are when you look at all of the devices together,” said Fox. “It’s a population that we know is vulnerable to begin with. They’re struggling to survive. And the concern now is whether this [plasticizer] exposure is actually contributing to their problems when these medical products are supposed to be helping them get better.”

Of course, there’s a reason why plasticizers are used to begin with: Durable and bendable plastics make it easier to deliver nutrients, blood, and breathing support to infants. Julie Herbstman, an environmental-health professor at Columbia’s School of Public Health, says that tackling the problem isn’t as simple as getting rid of the chemical: “The question is, do we know anything about replacements? That’s a pervasive problem in our field. We find something that’s bad and you have to take it out. Then you have to replace it, and you end up in this crazy cycle. People have compared it to Whac-A-Mole.” A similar problem has come up in the effort to replace BPA in plastics: As my colleague Mariah Blake wrote in an exposé on the subject earlier this year, new studies on BPA-free plastics “suggest that many of these alternatives share the qualities that make BPA so potentially harmful.”

In the case of medical equipment, there do seem to be some replacements: A handful of hospital chains, including the massive, California-based Kaiser Permanente, have opted to limit or ban DEHP and PVC in medical equipment. In 2012, Kaiser announced that it would convert to DEHP and PVC-free IV solution bags, and DEHP-free IV tubing, because, as the press release read, “industrial chemicals used in plastics that have been shown to harm human and environmental health.” Each year, Kaiser buys around 5 million IV tubing sets and 9 million solution bags, meaning that nearly 100 tons of medical equipment have been replaced with phthalate-free alternatives. In the process, the chain saves about $5 million per year. However, phthalate-free alternatives don’t yet exist for all medical equipment; as of last year, over half of Kaiser’s DEHP-containing medical products had yet to be replaced, according to Plastics Today.

Still, the John Hopkins researchers remain cautiously optimistic: “We do have to make tradeoffs and we want to save these babies,” Fox said in a recent press release. “But can we save them by using alternative products that reduce their exposures to substances that may be harming them? It seems like we could.”