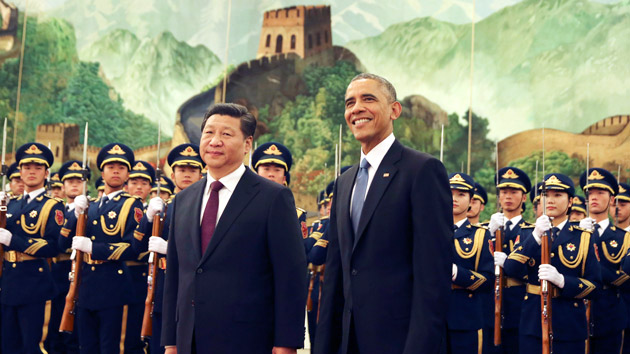 The Chinese and American presidents in Beijing on Wednesday. Apparently they got something done. Andy Wong/AP

This story originally appeared in The Atlantic and is republished here as part of the Climate Desk collaboration.

I’ve been offline for many hours and am just now seeing the announcements from Beijing. The United States and China have apparently agreed to do what anyone who has thought seriously about climate has been hoping for, for years. As the No. 1 (now China) and No. 2 carbon emitters in the world, and as the No. 1 (still the US) and No. 2 economies, they’ve agreed to new carbon-reduction targets that are more ambitious than most people would have expected.

We’ll wait to see the details—including how an American president can make good on commitments for 2025, when that is two and possibly three presidencies into the future, and when in the here-and-now he faces congressional majorities that seem dead-set against recognizing this issue. It’s quaint to think back on an America that could set ambitious long-term goals—creating Land-Grant universities, developing the Interstate Highway System, going to the moon—even though the president who proposed them realized that they could not be completed on his watch. But let’s not waste time on nostalgia.

Before we have all the details, here is the simple guide to why this could be very important.

1) To have spent any time in China is to recognize that environmental damage of all kinds is the greatest threat to its sustainability—even more than the political corruption and repression to which its pollution problems are related. (I’ll say more about the link some other time, but you could think of last week’s reports that visiting groups of senior Chinese officials have bought so much illegal ivory in Tanzania that they’ve driven the black market price to new highs.)

Unless China and the US cooperate, there is no hope for anyone else.

You can go on for quite a while with a political system like China’s, as it keeps demonstrating now in its 65th year. But when children are developing lung cancer, when people in the capital city are on average dying five years too early because of air pollution, when water and agricultural soil and food supplies are increasingly poisoned, a system just won’t last. The Chinese Communist Party itself has recognized this, in shifting in the past three years from pollution denialism to a “we’re on your side to clean things up!” official stance.

Analytically these pollution emergencies are distinct from carbon-emission issues. But in practical terms pro-environmental steps by China are likely to help with both.

2) To have looked at either the numbers or the politics of global climate issues is to recognize that unless China and the US cooperate, there is no hope for anyone else. Numbers: These are far and away the two biggest sources of carbon emissions, and China is the fastest-growing. As John Kerry points out in an op-ed in tomorrow’s NYT, reductions either of them made on its own could just be wiped out unless the other cooperates. Politics: As the collapse of the Copenhagen climate talks five years ago showed, the rest of the world is likely to say, “To hell with it” if the two countries at the heart of this problem can’t be bothered to do anything.

We see our own domestic version of this response when people say, “Why go through the hassle of a carbon tax, when the Chinese are just going to smoke us to death anyway?” This new agreement does not mean that next year’s global climate negotiations in Paris will succeed. But it means they are no longer guaranteed to fail.

3) China is a big, diverse, churning, and contradictory place, as anyone who’s been there can detail for hours. But for the past year-plus, the news out of China has been consistent, and bad.

We’ll wait to see the details. But at face value, this is better news than we’ve gotten for a while.

Many people thought, hoped, or dreamt that Xi Jinping would be some kind of reformer. Two years into his watch, his has been a time of cracking down rather than loosening up. Political enemies and advocates of civil society are in jail or in trouble. Reporters from the rest of the world have problems even getting into China, and reporters from China itself face even worse repression than before. The gratuitous recent showdown with Hong Kong exemplifies the new “No More Mr. Nice Guy” approach.

A nationalistic, spoiling-for-a-fight tone has spilled over into China’s “diplomatic” dealings too. So to have this leader of China making an important deal with an American president at this stage of his political fortune is the first news that even seems positive in a long while.

We’ll wait to see the details. But at face value, this is better news—about China, about China and America, and about the globe—than we’ve gotten for a while.