He’s sitting behind a wooden table piled with a dozen tilapia and Nile perch at the market in Katoro, a roadside town in northern Tanzania. The fish—a staple of the Tanzanian diet—came in that morning from Lake Victoria, an hour’s drive north. Around us, hundreds of shoppers are snatching up pineapples, textiles, and motorcycle parts. But Mohammed explains that basic economics is keeping customers away from his fish.

“There’s less fish,” he says. “So the price goes up, so customers can’t afford to buy.”

In the two years Mohammed has operated this stall, the retail price for both species has doubled. An average Nile perch has gone from roughly $2 to $4; tilapia from $4 to $8. That’s far above the overall rate of inflation.

Stories like Mohammed’s are becoming common among vendors and fishermen across Tanzania. The freshwater fishing industry here is nine times larger than the ocean fishing industry, and it’s a vital source of income for more than 2 million people, according to the United Nations. Half of the freshwater haul comes from Lake Victoria.

Nile perch makes up the majority of the catch. An invasive species that has dominated the lake for half a century, it’s driven many of the native fish to extinction, earning it a reputation as an ecological disaster. For fishermen, though, it has become a cornerstone of the economy.

Overfishing and climate change, O’Reilly says, are “the perfect storm.”

But over the last several years, locals here say, fish yields have begun to drop. The culprit: a worrisome combination of overfishing and climate change.

Hard statistics are notoriously difficult to come by, as the resource-strapped federal fisheries agency struggles to keep tabs on an industry composed almost entirely of small-scale, informal operators. But a 2013 government audit painted a disturbing picture. Between 2009 and 2011, according to the audit, yields of Nile perch on Lake Victoria fell about 5 percent.

Further evidence of a population in decline came from the reported size of fish caught. When a fish population is being snatched up faster than it can reproduce, the average length of caught fish tends to decrease, because fewer of them are able to survive into maturity. The audit found that between 2008 and 2010, the number of fish meeting the minimum size criteria at major processing facility near the lake dropped by more than half.

The main problem, according to the audit, is overfishing. It blamed the federal fisheries agency for failing to set and enforce catch quotas, and it found that reported yields of Nile perch greatly exceeded the limit at which the population can be sustainably harvested.

But some scientists also point a finger at climate change. East Africa has warmed by about 2 degrees Fahrenheit over the past century, a trend that is expected to continue. The rising temperatures are gradually altering conditions within Lake Victoria and the region’s other “Great Lakes”—Lake Tanganyika and Lake Malawi.

“The warming of the water bodies in the lakes so far has actually shown some serious impact on the productivity of the lakes,” says Pius Yanda, a climatologist at the University of Dar es Salaam and a contributing author to the 2007 report issued by the UN’s Intergovernmental Panel on Climate Change. 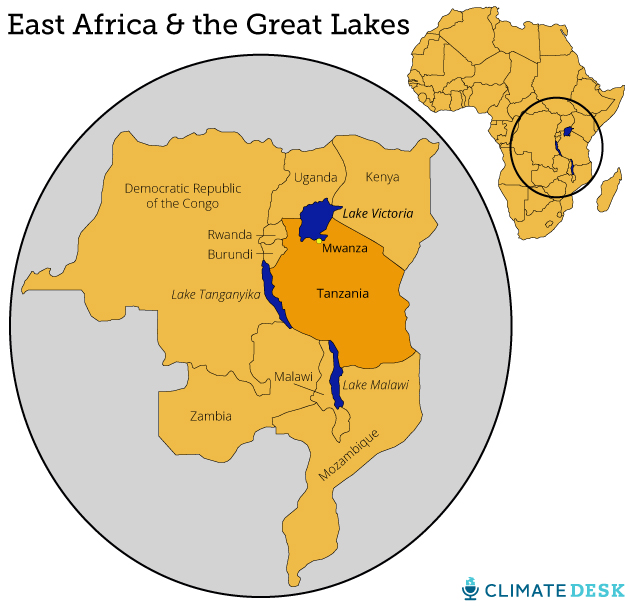 A 2003 study in the journal Nature examined algae records from the bottom of Lake Tanganyika and found that over the last century, warming waters have driven down the lake’s fish yield by 30 percent. Water near the surface, warmed by the sun and air, traps cold water underneath and prevents the lake from mixing. This prevents nutrients from the depths from reaching plankton near the surface, which in turn leads to a diminishing supply of food for fish.

At the same time, deeper water in the lake gradually loses dissolved oxygen, forcing fish to swim closer to the surface, where warmer water impedes their metabolism and makes them more susceptible to hooks and nets. The result is fish packed into a smaller area, competing for less food, and struggling to survive, says study author Catherine O’Reilly, a hydrogeologist at Illinois State University.

Add in overfishing, O’Reilly says, and “it’s the perfect storm.”

“These things are making life hard for fish, so you’re going to see those populations decline rapidly,” she adds.

The same problems could be playing out in Lake Victoria, O’Reilly says, even though that lake is very different from Tanganyika. Tanganyika is extraordinarily deep—second only to Siberia’s Lake Baikal—so a lack of mixing is especially problematic. By comparison, Victoria is very shallow and mixes more easily. And because Victoria has such a large fishing industry, as well as polluted runoff from cities on its shores, the climate change signal is harder to tease out. But, O’Reilly says, “there’s reason to think that fish populations in Victoria are probably struggling.”

Boom to Bust
It’s not just fish that are struggling, says Donald Kasongi, director of Governance Links, an environmental nonprofit in Mwanza, the biggest fishing port on the Tanzanian shore of the lake. This city’s economy has long revolved around fishing, but now many of the local processing plants have shuttered or are operating at a fraction of their capacity, he says. Kasongi estimates that over the last several years, up to half of the city’s full-time fishery workers have had to find other work.

“This is a serious threat for the household economy,” he says. “We are now seeing what will happen in the future if we go on like this.” 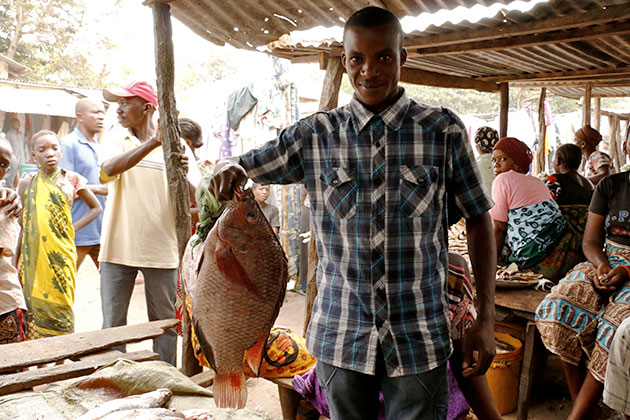 At markets in northern Tanzania, vendors like Ibrahim Mohammed say prices for tilapia and Nile perch have doubled in the last few years. Tim McDonnell/Climate Desk

The situation in Mwanza also stems in part from Tanzania’s transition away from the socialist economic system that had been in place since the country’s independence from Great Britain in 1961, Kasongi says. In the mid-1990s, the country opened its doors to foreign investment for the first time, and one industry that proved especially attractive was fishing. Within a few years, wooden fishing canoes were making way for large trawlers, and Mwanza was packed with new processing plants.

At the time, fishing seemed like a windfall, Kasongi recalls, proof that a sudden dose of capitalism could jumpstart the foundering Tanzanian economy. But in retrospect, the uninhibited plunder of Lake Victoria was really just setting Mwanza up for a crash.

“The way we were taking the stock was mad,” he says. “Not sustainable, definitely.”

Today the real costs of last decade’s boom are coming in. One victim of the fish bust is Christopher Kazoni, a lifelong fisherman who was forced to give up working the lake last year after his income took a tumble. Over the summer, he joined with some friends to set up a fish farm, squeezed between a major thoroughfare and the lakeshore. Their artificial ponds are now home to the same species that they used to catch in the lake. Victoria is no longer a reliable source of income, Kazoni says, speaking in Swahili through a translator.

“In 10 or 20 years, the fish will be so scarce that it’s better to prepare ourselves now, rather than depending on the lake,” he says.

“The way we were taking the stock was mad.”

Yet for all the anxiety in Mwanza, climatic changes elsewhere in Tanzania could actually make the lake look comparatively attractive. A 2012 UN study found that between the 1970s and 2000s, precipitation during the country’s main rainy season fell by 30 percent. Seasonal patterns that farmers have depended on for generations are becoming unpredictable, Yanda says, as global warming disrupts weather systems over the Indian Ocean.

“The distribution of the rainfall is so sparse, and then you have extended dry spells in between,” he says. “This is causing frequent crop failures in the field.”

In response, Yanda said, many farmers and ranchers are moving to where the supply of water is more dependable: Lake Victoria. Population density growth around the lake has exploded over the last decade, outstripping the continent-wide average by nearly tenfold, according to the UN. That’s putting even more stress on the lake’s already-overworked resources.

The best response, Kasongi says, is to pressure the government to crack down on overfishing and lakeside pollution and to encourage policies that will allow fish populations to thrive into the future. Those steps could make it a little easier to adapt to the impacts of climate change.

“We may not go back to where we used to be,” he says. “But there is something we can do.”

This story was produced with support from the European Journalism Centre.