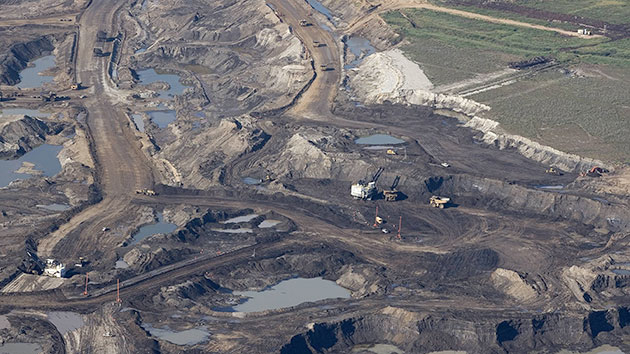 Oil from Canada's tar sands is extremely dirty and expensive to extract. That's why we shouldn't use most of it, a new study finds.Imago/ZUMA

When scientists and policymakers talk about limiting climate change, what they’re mainly talking about keeping more fossil fuels in the ground. The fact is, there’s no way to prevent global warming from reaching catastrophic levels if we burn up our remaining reserves of oil, gas, and coal.

Climate negotiators have agreed that warming should be limited to 3.6 degrees Fahrenheit above preindustrial level. That means that humans can release about 1.1 trillion metric tons of carbon dioxide emissions, and we’ve gone through about half of that already. The remaining emissions are known as our “carbon budget”; if we “spend” emissions beyond our budget, we’re much more likely to push the planet to dangerous levels of warming. If we burned through all of our current reserves of fossil fuels, we would overspend the budget by about threefold.

In other words, there are a lot of fossil fuels that are “unburnable” if we’re going to stay within the prescribed warming limit. But how much, exactly? And where exactly are those unburnable fuels? That’s the question asked in a study released today in the journal Nature by a team of energy analysts at University College London. The answer matters because mapping the geographical spread of unburnable fuels is a key step in understanding the roles specific regions need to play in the fight against climate change.

The model developed by Christophe McGlade and his team takes into account known estimates of fossil fuel reserves in a number of different countries and regions, as well as the global warming potential of those reserves and the market forces that determine which reserves are the most cost-effective to exploit. The results, shown below, are what the model finds to be the most cost-effective distribution that stays within the 3.6-degree limit.

The researchers ran the model twice: Once assuming widespread use of carbon capture and storage (an emerging technology for catching carbon emissions as they escape from power plants that is gaining steam but has yet to be proven on the global stage), and once assuming no CCS at all. The two scenarios ultimately aren’t that much different—using CCS won’t allow us to burn vastly more coal, oil, and gas. The results shown below are from the “with-CCS” scenario. 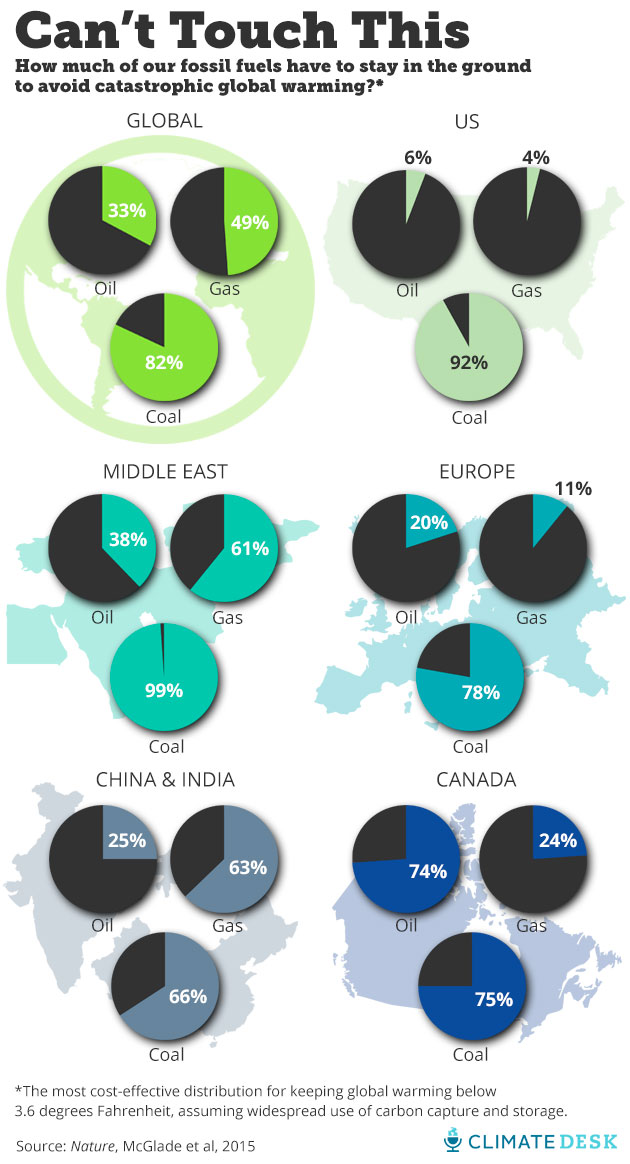 A couple interesting things pop out. As you might expect, the vast majority of the world’s coal would need to stay buried. The United States is able to use most of its oil and gas in this scenario, because those resources are relatively cost-efficient to extract and bring to market compared to, for example, gas in China and India. In other words, according to this study, the US fracking boom can go forward full steam as long as the gas it produces aggressively replaces our coal consumption. But Canada can’t touch most of its oil, because the oil there—the kind that would be carried in the Keystone XL Pipeline—is exceptionally carbon-heavy tar sands crude.

What isn’t shown in the graphic above is that the model prohibits developing any of the vast oil and gas reserves in the Arctic. Melting sea ice has made those reserves increasingly attractive to energy companies like Shell.

Of course, the model has to make assumptions about future oil and gas prices that are basically impossible to be certain about. Unexpected changes to the price of oil, for example, could upset the cost equation for drilling in the US and re-shuffle the entire regional breakdown. But even as an estimate, the study really illuminates the vital need for policies all over the world that dramatically cut our dependence on coal.