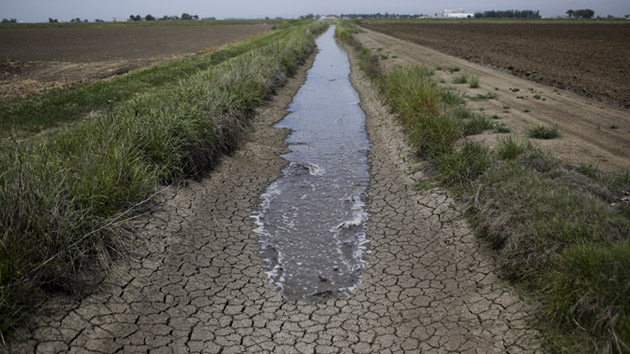 By now, the impacts of California’s unchecked groundwater pumping are well-known: the dropping water levels, dried-up wells and slowly sinking farmland in parts of the Central Valley.

But another consequence gets less attention, one measured not by acre-feet or gallons-per-minute but the long march of time.

As California farms and cities drill deeper for groundwater in an era of drought and climate change, they no longer are tapping reserves that percolated into the soil over recent centuries. They are pumping water that fell to Earth during a much wetter climatic regime—the ice age.

Such water is not just old. It’s prehistoric. It is older than the earliest pyramids on the Nile, older than the world’s oldest tree, the bristlecone pine. It was swirling down rivers and streams 15,000 to 20,000 years ago when humans were crossing the Bering Strait from Asia.

“What I see going on is a future disaster,” says Vance Kennedy, a retired research hydrologist. “We are mining water that cannot be readily replaced.”

Tapping such water is more than a scientific curiosity. It is one more sign that some parts of California are living beyond nature’s means, with implications that could ripple into the next century and beyond as climate change turns the region warmer and robs moisture from the sky.

“What I see going on is a future disaster. You are removing water that’s been there a long, long time. And it will probably take a long time to replace it. We are mining water that cannot be readily replaced,” said Vance Kennedy, a 91-year-old retired research hydrologist in the Central Valley.

Despite such concern, the antiquity of the state’s groundwater isn’t a well-known phenomenon. It has been discovered in recent years by scientists working on water quality studies and revealed quietly in technical reports.

Groundwater is crucial to California. In an average year, nearly 40 percent of the state’s water comes from underground sources. In the current extended drought, it’s more than half. Eighty percent of California residents rely to some degree on groundwater. Some towns, cities and farming operations depend entirely on it. 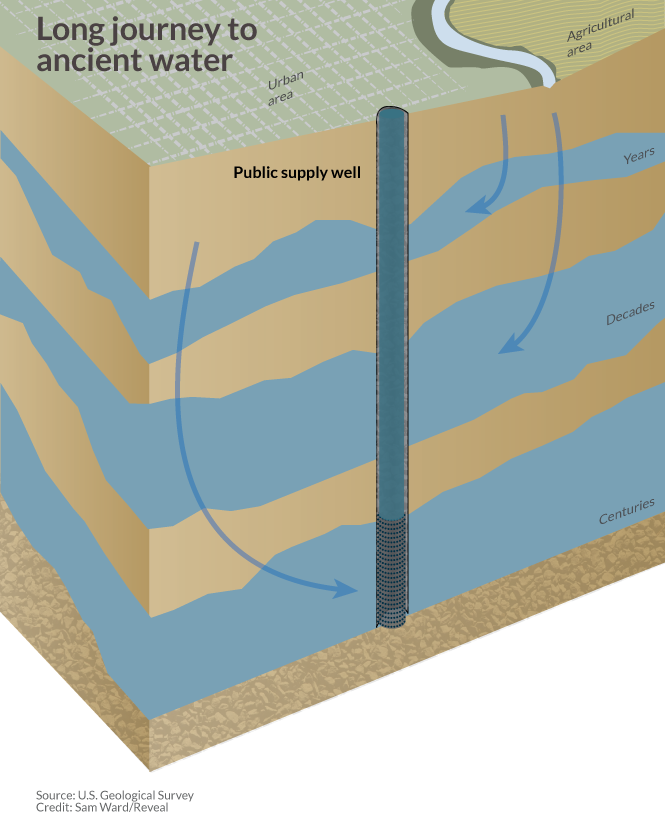 Groundwater is like a bank account. You want to balance the debits and credits, not draw down the principal. But California has been depleting its groundwater principal for generations, pumping more than nature can replenish. So, too, has the United States as a whole. The biggest overall user is agriculture.

“If we continue irrigating at the increasing rates that we are in the US, the bottom line is that can’t be sustained,” said Leonard Konikow, a retired US Geological Survey hydrogeologist in Virginia. “That can’t go on forever.”

Over the past century, US groundwater has been depleted by nearly 1,000 cubic kilometers—about twice the volume of Lake Erie.

A new article by Konikow in the journal Groundwater estimates that nearly 1,000 cubic kilometers—about twice the volume of Lake Erie—was depleted across the United States from 1900 to 2008. That’s enough to contribute to rising sea levels, along with melting glaciers and polar ice.

“That really surprised a lot of people,” Konikow said.

The pace of depletion has jumped dramatically since 2000. And Konikow identified one area that appears to have the most serious depletion problem in the nation—California’s agricultural powerhouse, the Central Valley, especially its more arid southern portion.

How long the bounty can last is anyone’s guess. As wells are drilled deeper, pumping costs soar. Water quality can suffer. In some areas, the earth itself is starting to sink as deep aquifers are pumped to historic low levels.

That problem is known as subsidence, and it’s a big deal. As the land sags, it is harming water delivery canals, damaging wells and buckling pavement.

“The rates of subsidence we are seeing are about a foot per year in some areas. They are just phenomenal,” said John Izbicki, a research hydrologist with the US Geological Survey.

The last time this happened, during a binge of overpumping in the 20th century, one part of the valley sank 28 feet and damages topped $1.3 billion (in 2013 dollars), according to the California Water Foundation.

But that’s not all: As those deep aquifers are pumped, they suffer structural damage and no longer hold as much water as before. To visualize what happens, imagine a kitchen sponge.

“You take it out of the package and it’s all nice and fluffy,” said Bryant Jurgens, a research hydrologist with the US Geological Survey. “After a month of use, it starts to shrink. When you wet it again, it doesn’t ever quite get as big as it originally was. That’s exactly what happens to the aquifer.”

And some of that water, as it turns out, is quite ancient. If you bottled it, you could label it the provenance of the Pleistocene—a geological epoch that lasted from about 2.5 million to 12,000 years ago.

The landscape was much different back then. Yosemite Valley was a river of ice. Mastodons and other now-extinct creatures roamed the West Coast. To the east and south, lakes stretched for miles across terrain we now call desert.

All water, in a sense, is ancient. It’s been cycling through clouds, rivers, forests and oceans for millions of years. But in recent decades, scientists have found ways to determine roughly when precipitation fell to earth and percolated into the surface, becoming groundwater.

They do it by testing water for the presence of certain compounds that decay slowly over time, such as carbon-14, a radioactive isotope that also is used to estimate the age of ancient civilizations and human ancestors.

There is no point-and-click website that reveals the age of groundwater in the state. To access the information, you must wade through a tangle of studies compiled by the US Geological Survey as part of a state-funded public drinking water-quality monitoring program.

The jargon in those studies is so thick it is nearly incomprehensible. But deep in the scientific sediment are nuggets worth sharing with friends—a sentence here, a table there. They show water pumped from some deep public supply wells in the valley is 10,000 to more than 30,000 years old. Similar ages also have been reported in many desert basins, including Coachella Valley and Owens Valley, a major source of drinking water for Los Angeles.

What that means for the future is uncertain. Even though many areas pump more water than is recharged naturally, there is still more groundwater to be pumped.

And many areas also recharge aquifers with surface water imported from elsewhere.

“There are places where you could be pumping very old groundwater and there is sufficient recharge to the system—so it’s not necessarily a problem,” said Miranda Fram, a research chemist with the US Geological Survey. “But in many cases, it is. It’s mining old groundwater that’s not being replenished.”