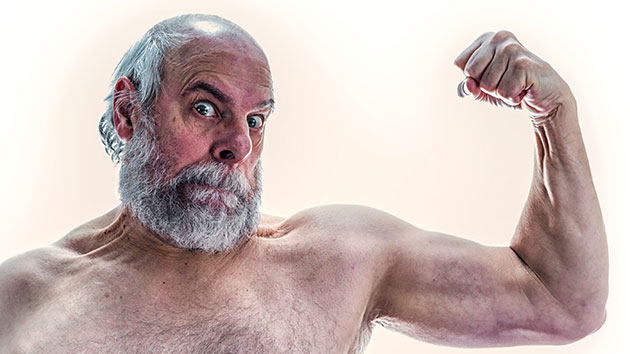 Last summer, at the Googleplex in Mountain View, California, I sat in a room full of scientists, innovators, and thought leaders. Someone asked how long everyone would like to live. To my great surprise, most people agreed that somewhere in one’s 90s was a good time to kick the bucket. Given that this was a collection of curious and optimistic people whose religion is science, I was shocked that—unlike me—more of them didn’t want to live forever.

I later found out that this reaction is actually representative of the general population: Among the attendees was fellow science writer David Ewing Duncan, who has asked this question online and at the beginning of numerous talks, collecting more than 30,000 responses. The consensus? About 85 percent of people wouldn’t want to live past 120, and more than half agreed that 80 years was about how long they’d like to live. The number of people who would like to live forever? Less than 5 percent.

Bill Gifford is in that mortal majority, despite the title of his most recent book, Spring Chicken: Stay Young Forever (or Die Trying). Aging, explained Gifford on the latest episode of the Inquiring Minds podcast, “kind of sucks.”

In his book, Gifford points out that the quest to find a cure for aging has permeated our thoughts for as long as there’s been a written record. “The oldest existing great work of literature,” writes Gifford, “the nearly four-thousand-year-old Epic of Gilgamesh, in part chronicles a man’s quest for the elixir of eternal life.”

And, given the fact that—according to Gifford—we spend some “eleventy bajillion dollars” on anti-aging creams alone, surely we must be close to discovering the formula for age-reversal. Well not quite yet. But here are some promising lines of research that might eventually lead to a hack that works forever. Or at least for a few extra decades.

1. Follow Michael Pollan’s advice to eat real food, not too much, and mostly plants: In the 1930s, a nutritionist at Cornell named Clive McCay discovered the writings of a 16th-century diabetic who, at a time when diabetes was poorly understood, voluntarily put himself on a strict diet and within a week began to feel much better. Nearly dead in his 40s, the man experienced a complete turnaround. “Even in his eighties, he was still bounding up and down the stairs of his estate,” writes Gifford. McCay read his treatise with fascination, noting that the Italian’s secret to a long life—he ultimately lived to 98—seemed to be contained in a simple message: Don’t eat so much.

For a nutritionist like McCay, this message was intriguing to say the least. So he decided to test it—by underfeeding a group of baby rats. And sure enough, his scrawny, half-starved experimental group lived almost twice as long as the portly but satisfied control group—in some cases, up to four years. Caloric restriction, as it came to be called, has been shown to increase the life spans of mice, rats, and monkeys, and to decrease the incidence of age-related diseases.

There’s still some controversy, however, as to whether the beneficial effects of caloric restriction result from fewer calories total or just fewer “bad” calories coming from junk food. A 2012 study from the National Institutes of Aging compared groups of rhesus monkeys who were fed healthy diets—similar to what Pollan might recommend—and in this case, a 30 percent reduction in calories did not seem to have much of an effect. So some scientists have suggested that in earlier studies, the experimenters were comparing animals fed what we humans would consider junk food with those whose diets included less sugar and fat. But the NIA study is still ongoing, and there’s some new evidence that even if the monkeys ate healthy food, there still might be a benefit in showing some restraint.

So what’s going on? Are the hungry animals simply less likely to get diabetes? “When you’re not eating, your cells actually do go into a different state,” explains Gifford. “It’s like they have a different engine.” Eating less puts your body into a “conservation” mode, in which you’re not growing and metabolizing food in the same way. And—if scientists like McCay are correct—animals in this mode can live longer.

An important note of caution, though. Eating too little can of course lead to malnutrition, which has its own negative side effects and is quite common in the elderly. And restricting calories in children is particularly dangerous, as development stalls in the conservation mode.

2. Metformin: There’s actually a treatment for diabetes that also shows promise in terms of increasing our longevity. Metformin, a drug commonly prescribed to treat patients with type 2 diabetes, has been shown to extend the health span—that is, how long someone remains healthy—and the life span of male mice. “Diabetics who are on metformin actually seem to be living longer than nondiabetics who are not on [it],” says Gifford, “when in fact the reverse should be true. The diabetics should be dying sooner.” It turns out that taking metformin provides some of the benefits of caloric restriction, such as improved physical performance and better cholesterol levels. In your cells, metformin increases antioxidant protection and reduces chronic inflammation, one of the mechanisms by which aging ravages our bodies.

3. Exchange your old blood for young blood: The vampires were on to something: The fountain of “youthiness,” as Gifford calls it, might be found in our circulatory system. One of the things that sucks about aging is the way in which our ability to recover from injury and fend off illness declines. Blood has long been a candidate for élan vital—or the essence of life—and even back in the 16th century, Sir Francis Bacon transfused blood from a young dog to an old one, which seemed to rejuvenate him. In the 1970s, a scientist at the University of California-Irvine cut open young rats and sewed them to old rats, a method called parabiosis, essentially combining their circulatory systems. These rats lived much longer than those who were paired with rats of the same age—four to five months longer, which, given that the average life span for a lab rat is about two years, is an enormous difference.

Even more exciting is research coming from the lab of Tony Wyss-Coray and his colleagues at Stanford University, who infused older mice with the blood of younger animals and found that the older mice were indeed rejuvenated. Their brains became more plastic and malleable—a hallmark of youth. The procedure enabled them to learn and remember information like their younger donors and helped them perform much better on tests of mouse cognition. Below, you can watch an older mouse show improvement on a maze test after being infused with young blood.

4. Train for the Senior Olympics: If someone told you that there was an absolutely free treatment that hundreds of studies had shown to be effective in combating many different age-related diseases, you probably wouldn’t believe them. But this miracle drug really does exist—in the form of exercise. “Between 50 and 70, we say goodbye to about 15 percent of our lean muscle,” says Simon Melov, a professor at the Buck Institute for Research on Aging, who is quoted in Gifford’s book. “After that, it jumps to 30 percent per decade. You could make the case that aging starts in muscle.” As we age, this muscle turns to fat. And because muscles burn more calories than fat, your metabolism—the process by which your cells turn food into fuel—slows down, leaving more sugar in your blood and making you more vulnerable to diabetes. Staving off the metabolic changes that accompany this shift from muscle to fat will help keep your body young. Many pharmaceutical companies are developing drugs to promote muscle growth, but thus far, staying active seems to be just as effective.

Part of the effect that exercise has on our metabolism has to do with how our genes are expressed. Throughout your lifetime, different genes are turned on and off depending on things like your age, your behavior, and your environment. So although you might have a genetic predisposition for smoking-related cancers, for example, you might be able to stave off the disease by not smoking. (Even if you’ve never smoked, however, it’s still possible to get lung cancer.)

Similarly, exercising seems to turn off some genes while turning on others. In a remarkable study from 2007, a bunch of Canadians were placed on a strict exercise regimen for six months. Half of them were old, and half were young. Scientists then compared biopsies of their muscles taken before and after the regimen. And they found that the older Canadians had activated many of the genes that were active in their younger counterparts but that had been inactive before they began to exercise. Exercise seemed to have switched on young genes, and switched off older ones—particularly genes that were involved in metabolism.

Think you’re already too old to start exercising? Many medal winners in the Senior Olympics start training after retiring from their jobs, like 89-year-old Dr. Granville Coggs, who ran his first race when he was 77. For some more inspiration, watch the women’s 400-meter sprint from the 76-80 age group at the 2013 Senior Olympics, complete with commentary by the friends of the competitors in this video.

5. Be small: While height might give you many advantages during your working years, it may also contribute to your early demise. The taller you are, the more likely you are to develop cancer, among other problems. Why height is a risk factor for cancer remains unclear, but it might have to do with the fact that the taller you are, the more cells you have and the higher your likelihood of developing a cancer-causing mutation in them. In fact, people who live past 100 aren’t just small because they’ve shrunk with age—they actually tend to have started out on the smaller side. Just like for dogs, whose life span negatively correlates with size—that is, the smaller the dog, the longer its life expectancy—being short has its advantages.

To listen to my full interview with Bill Gifford, stream below: