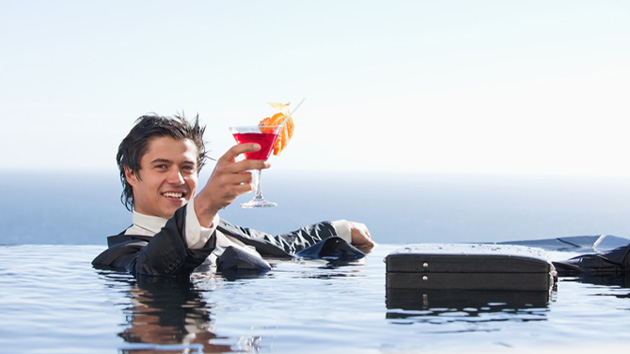 This story was originally published by Wired and is republished here as part of the Climate Desk collaboration.

Want to get rich? Move to California, become a lawyer. Most important, specialize in water, because as the state’s drought drags on, every drop of coastal rain, every flake of Sierra snowpack, and every inch of reservoir water becomes both more valuable and more contested. Before long you’ll start counting rain drops—every one that fails to fall will ring cha-ching.

The latest windfall to California’s legal community came Friday, when the State Water Resources Control Board announced it was cutting certain historical water rights—held by some farmers, communities, and companies for more than a century. In a normal state with a normal drought, this wouldn’t be too much of an issue. But California water policies are so old (and so unsuited to the state’s desert ecosystem) that they might be outside the jurisdiction of the present-day water board. With barely a weekend for curtailment news to simmer, the summer air is already thick with lawsuit rumors.

“California has the most complex system of water rights in the world,” says Buzz Thompson, a legal expert in said system at Stanford University. The state’s problems trace back to its earliest days. In order to take the stress out of drafting up a constitution from scratch, California’s founders adopted English Common Law, and customized it with caveats to fit their needs. Unfortunately, they didn’t bother amending the Common Law rules on water allocations.

“California has the most complex system of water rights in the world,” says Buzz Thompson of Stanford University.

The English, and thus Californians today, used a system called riparian law: You are allowed to use a reasonable amount of any tributary, creek, stream, or river that abuts or bisects your land. This worked great in rainy England, veined with waterways. “That type of system of makes no sense in California,” says Thompson, “because there is a lot of land through which no river or stream passes.”

If you want water to run through your land in California, you have to dig a path for it yourself. The necessity of canals and pipes led to an irrigation-based water rights system called prior appropriation. Under this system, you are allocated a reasonable amount water from the source from whence you diverted, as long as you put it to good use.

Here’s where things get ridiculous. The system for establishing rights to those flows was—prior to 1914—absolutely bananas, leading to a lot of inappropriate water usage in a state that was, and remains, essentially a desert.

To lay claim to running water back then, all you had to do was post and record a notice of the diversion. In 1901, the mayor of San Francisco used this law to claim the Tuolumne River by posting a note on a tree. The state finally figured out its own water scarcity in 1914, when it passed a law requiring any new claims to submit an application to a state-controlled board (now known as the State Water Resources Control Board).

Literally kept in an old safe in the back room of an office building in Sacramento, these slips of paper determine how much water each rights-holder is due. More importantly, they determine the order in which the rights holder gets to drink. And that’s determined historically: First in line, first in law. “The whole system was created through action on the ground rather than someone making a legal regime and then codifying the system,” says Leon Szeptycki, the director of the Water in the West program at the Stanford Woods Institute for the Environment.

Setting up a first come, first serve water system in a desert is pretty insane. (For one thing, it creates an uneven patchwork of water haves and have-nots.) What’s crazier is that political pressures at the time meant the pre-1914 allocation and riparian rights got grandfathered right past the whole thing. That’s right: There are people in California whose right to water came from putting a piece of paper on a tree, and those rights are some of the most senior in the state. And they don’t just belong to people. Corporate farming conglomerates, sprawling rural irrigation districts, several cities, and even the state’s Department of Fish and Wildlife have pre-1914 water rights.

In 1901, the mayor of San Francisco claimed the Tuolumne River by posting a note on a tree.

Which brings us to last Friday. This move restricts access to water rights holders whose claims date from 1903 to 1914. (The state had already curtailed all post-1914 rights). Thompson says the agency’s move is both expected and incredibly historic. Expected because without precipitation the state is forced to cut off water from senior rights holders. Historic because the State Water Resources Control Board is a fairly cautious agency that does not like being sued.

“The most important thing about the most recent curtailment order is it reflects the depth of our current drought,” he says. In response to Friday’s announcement, many of the pre-1914 rights holders announced plans to sue the water resource board because their rights predate the existence of the board. In fact, the State Water Resources Control Board’s charter states that it only controls permits that come after 1914.

On the other hand, the board’s charter does not prevent it from curtailing pre-1914 rights, neither riparian nor appropriated. Further, there are several state statutes giving the board the authority to police both reasonable uses of water and illegal diversions. “Those statutes as well as other legislative and legal decisions I think provide the board sufficient authority to issue the type of curtailment orders that they did,” says Thompson.

And as long as the drought continues, these curtailments will continue to reach back in time; all the way to the most senior rights holders, whose allotments trace back to the Gold Rush.

But even though Governor Brown teased an overhaul of the state’s allocation system earlier this year, legal experts doubt this is possible. That’s because California’s water rights knot is enshrined in the state’s constitution. Any challenges would probably have to be backed up at the federal level.

Caught between the calcified reality of the drought and the calcified words in the state’s constitution, the curtailments will probably continue—and the lawsuits will follow. And like we’ve said before, any explanation of California’s drought is always incomplete. Even if the state does win its case, enforcing the curtailments is an entirely different dilemma, with woefully outdated and outclassed methods of tracking water. These conflicts aren’t going away anytime soon. Which reminds me: Feel free to tell your kid to study water law too.