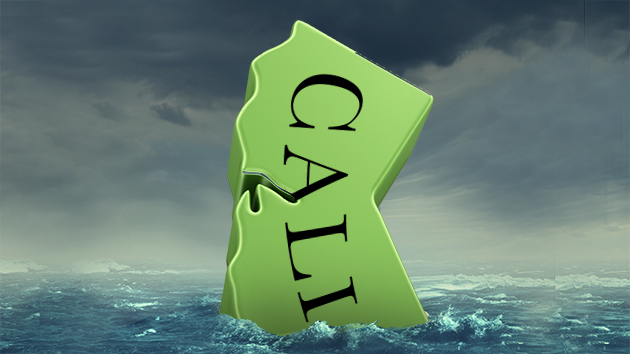 While the state’s drought-induced sinking is well known, new details highlight just how severe it has become and how little the government has done to monitor it.

Last summer, scientists recorded the worst sinking in at least 50 years. This summer, all-time records are expected across the state as thousands of miles of land in the Central Valley and elsewhere sink.

Some places in California are sinking more than a foot per year.

But the extent of the problem and how much it will cost taxpayers to fix are part of the mystery of the state’s unfolding drought. No agency is tracking the sinking statewide, little public money has been put toward studying it and California allows agriculture businesses to keep crucial parts of their operations secret.

The cause is known: People are pulling unsustainable amounts of water out of underground aquifers, primarily for food production. With the water sucked out to irrigate crops, a practice that has accelerated during the drought, tens of thousands of square miles are deflating like a leaky air mattress, inch by inch.

Groundwater now supplies about 60 percent of the state’s water, with the vast majority of that going to agriculture. Tens of thousands of groundwater pumps run day and night, sucking up about 5 percent of the state’s total electricity, according to a Reveal analysis of the increased pumping resulting from the historic drought. That’s an increase of 40 percent over normal years – or enough electricity to power every home in San Francisco for three years.

The sinking is starting to destroy bridges, crack irrigation canals and twist highways across the state, according to the US Geological Survey.

Two bridges in Fresno County—an area that produces about 15 percent of the world’s almonds—have sunk so much that they are nearly underwater and will cost millions to rebuild. Nearby, an elementary school is slowly descending into a miles-long sinkhole that will make it susceptible to future flooding.

Private businesses are on the hook, too. One canal system is facing more than $60 million in repairs because one of its dams is sinking. And public and private water wells are being bent and disfigured like crumpled drinking straws as the earth collapses around them—costing $500,000 or more to replace.

The sinking is starting to destroy bridges, crack irrigation canals and twist highways across the state.

The sinking has a technical name: subsidence. It occurs when aquifers are drained of water and the land collapses down where the water used to be.

The last comprehensive survey of sinking was in the 1970s, and a publicly funded monitoring system fell into disrepair the following decade. Even the government’s scientists are in the dark.

“We don’t know how bad it is because we’re not looking everywhere,” said Michelle Sneed, a hydrologist with the geological survey. “It’s frustrating, I’ll tell you that. There is a lot of work I want to do.”

Some places in the state are sinking more than a foot per year. The last time it was this bad, it cost the state more than a billion dollars to fix.

In the 1920s, farmers began transforming desert lands into verdant crop fields by pumping groundwater to the surface. At the time, these farmers were not just head and shoulders above their modern-day counterparts—they were actually as much as three stories above them. But then the land started to sink.

In the 1930s, scientists first noticed the land was sinking. At the time, the cause was a mystery. A legendary hydrologist, Joseph Poland, was assigned to solve the puzzle starting in the 1940s.

He realized that underneath the sinking land, groundwater was being pumped rapidly to irrigate crops. It created massive sinkholes that stretched for miles in every direction. In the farming community of Mendota, the land sunk about 30 feet between 1925 and 1977.

The sinkhole is so vast that it is essentially impossible for residents to see that they are standing in one. Poland used a utility pole to build a temporary monument to show them just how much the land had sunk.

The sinking, which peaked in the late 1960s, wreaked havoc on the state’s rapidly expanding infrastructure, damaging highways, bridges and irrigation canals. One estimate by the California Water Foundation put the price tag at $1.3 billion for just some of the repairs during that time.

The sinking did not slow until the 1970s, after California had completed its massive canal system—the most expensive public works project in state history. It delivered water from wetter parts of the state to farmers in the Central Valley and elsewhere, relieving their reliance on groundwater. The problem was fixed—at least for a while.

In 2012, Sneed, the hard-charging geological survey scientist, received a startling report. Land was subsiding along the San Joaquin River at a rate worse than during the 1987-92 drought. It was nearing the historic rates of sinking recorded by Poland in the late 1960s. She couldn’t believe it.

“Is this even real?” she asked. “We hadn’t seen rates of subsidence like that in a long time.”

She and others began assembling what little public data was available. They got funding to analyze satellite data for parts of the San Joaquin Valley. They discovered that in one of the worst observed areas, around the town of El Nido (Spanish for “The Nest”), land was sinking at a rate of about 1 foot per year in 2012.

“It’s incredible,” Sneed said, expelling a puff of air as if she still couldn’t believe it. “We looked away for a long time. And when we looked back, whoa—it had gotten real bad.”

The El Nido subsidence bowl was sinking so fast that the satellite couldn’t keep pace.

No one has monitored it since. But Sneed and others contacted by Reveal said they expect it now could be sinking by 2 feet per year. That would be an all-time record.

Chris White, general manager of the Central California Irrigation District, said that last year, a farmer near El Nido sent him a photo of a gas pipe that had protruded more than 18 inches from the ground in less than a year as the land sank around it.

White said Californians now might have the opportunity to witness firsthand the devastation Poland chronicled in the 1960s.

“There is that potential,” he said.

Sneed is practically begging to expand her limited research. A hodgepodge of about 350 ground-elevation monitors—many leftover from the 1960s—are all she and other researchers have to track tens of thousands of miles that are sinking. This includes vineyards in Sonoma and Napa counties, areas around Paso Robles and Santa Barbara, and agricultural regions encircling Los Angeles, all which have shown signs of sinking, according to a California Department of Water Resources report.

To draw awareness to the problem, Sneed replicated Poland’s 1977 photo. Her photo captures the early stages of today’s worsening subsidence problem, she said. But she and others expect that it will get much worse. 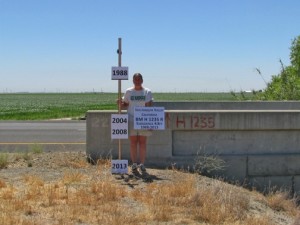 US Geological Survey scientist Michelle Sneed shows where a farmer would have been standing in 1988, before a six-year drought triggered sinking in California’s San Joaquin Valley. It also shows how sinking accelerated in 2008. US Geological Survey

Many businesses and state agencies appear to be unaware of the problem.

Sneed and her boss at the US Geological Survey, Claudia Faunt, have tried reaching out to various government agencies and private businesses to warn them and inquire about the extent of damage being done to infrastructure.

“We tried calling the railroads to ask them about it,” Faunt said. “But they didn’t know about subsidence. They told us they just fixed the railroads and categorized it as repair.”

Thousands of miles of highways snaking through the state also are being damaged, she said.

“They go to repair the roads, but they don’t even know it’s subsidence that is causing all the problems,” Faunt said. “They are having to fix a lot because of groundwater depletion.”

A spokeswoman for the state Department of Transportation said the agency does not track costs related to subsidence and was not aware of any current bridge repairs resulting from it.

But Faunt pointed to the Russell Avenue bridge that crosses the Outside Canal in the Central Valley. It sank during two previous droughts—one in the late 1970s and then again between 1987 and 1992. Now with the current sinking, the 60-year-old bridge is almost totally submerged by canal water.

Down the road about a mile, Russell Avenue crosses another irrigation canal, the Delta-Mendota Canal. That bridge is sinking, too, and now is partially submerged in water. Plans to replace it are estimated to cost $2.5 million, according to an estimate by the Central California Irrigation District.

The bridge is part of an $80 million list of public and private repairs already needed near the El Nido subsidence bowl because of sinking, White said.

Last year, the state passed its first law attempting to regulate groundwater, but farmers won’t be required to meet goals until 2040 at the earliest. And the information on who is pumping what will be kept private. 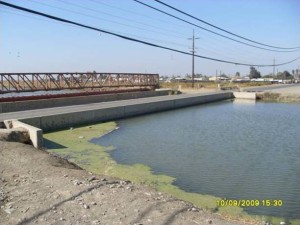 The Russell Avenue bridge once passed more than 2 feet above the water, but it has been sinking as a result of groundwater pumping and now is nearly submerged in the canal. US Geological Survey

“A doomsayer would say we will run out of water,” said Matt Hurley, general manager of the Angiola Water District, near Bakersfield. “But I don’t believe we’re heading there. We’ve been given a good opportunity with the sustainability law.”

But Devin Galloway, a scientist with the geological survey, sees devastation of a historic proportion returning to California. He says that even if farmers stopped pumping groundwater immediately, the damage already done to aquifers now drained to record-low levels will trigger sinking that will last for years, even decades.

“This could be a very long process. Even if the water levels recover, things could continue to subside,” he said. “This is a consequence of the overuse of groundwater.”