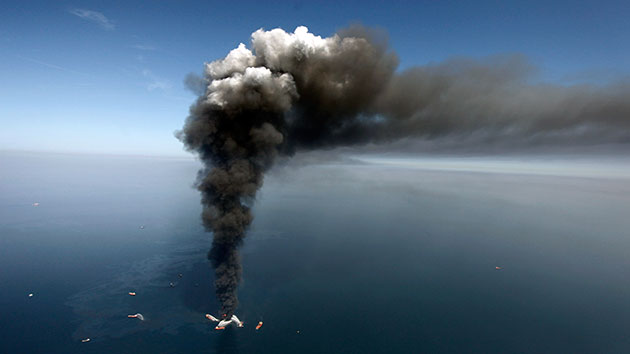 BP has agreed to pay a record environmental fine of $18.7 billion to settle legal actions brought by the US and several states over the fatal 2010 Gulf of Mexico oil spill.

The US justice department, along with the states of Louisiana, Mississippi, Alabama, Texas and Florida, all sued BP for damages not covered by the company’s earlier settlements with businesses and individuals harmed by the worst offshore spill in US history.

The settlement ends all litigation between BP, the states and the US government and allows the company to pay over 18 years. BP’s share price rose on the news.

Last September, judge Carl Barbier, who has overseen the tortuous legal case resulting from the disaster, ruled BP had been “grossly negligent” in its handling of the well. The decision opened up BP to the highest possible fines.

The company will pay $7.1bn in “natural resource damage assessment,” and the money will be divided among the states and earmarked for environmental cleanup projects related to the spill. BP was fined $5.5bn under the Clean Water Act.

The 2010 explosion at the Deepwater Horizon oil rig cost 11 lives and resulted in 4.2m barrels of oil spewing into the Gulf over 87 days, according to the US government.

BP argued the volume of the spill was far lower. Barbier eventually ruled BP was responsible for the release of 3.1m barrels. The spill affected the shore of the Gulf coast from Louisiana to Florida. Its impact on seafood and wildlife is still being assessed.

Louisiana attorney general James “Buddy” Caldwell said: “This agreement is the result of five years of hard-fought litigation and intense scientific research, and it provides Louisiana the coastal restoration and compensation it needs following the Deepwater Horizon disaster.”

He said Louisiana, the state most affected by the spill, was recovering more than $10bn from BP—more than any state has ever recovered for this type of case. “This agreement lets us focus right away on improving the state without further litigation delays and appeals that could take years. I am extremely pleased by the work done by the Court and all the parties in this matter to reach an agreement that will bring great and historic benefits to Louisiana and the Gulf.”

“Five years ago we committed to restore the Gulf economy and environment and we have worked ever since to deliver on that promise,” said BP chairman Carl-Henric Svanberg.

“We have made significant progress, and with this agreement we provide a path to closure for BP and the Gulf. It resolves the company’s largest remaining legal exposures, provides clarity on costs and creates certainty of payment for all parties involved.”