I recently heard a spot on KQED, San Francisco’s NPR affiliate radio station, that caught my attention. “Support for KQED comes from the Almond Board of California. The water needs of almond trees are not unique among trees, and almond growers are committed to innovation and water efficiency. More at almondsustainability.org,” read a radio host.

The defensive tone might be due to the unwanted press almonds have been getting, from Mother Jones and others, about how much water almonds use in drought-ridden California. The state accounts for 80 percent of the world’s almond production, and each almond takes about a gallon of water to grow. All told, growing the crop takes as much water in a year as Los Angeles homes and businesses use in three years. Over half of the almonds produced in California are exported abroad.

Now, it appears that the Almond Board of California, the trade group representing growers of the $6.5 billion crop, has gone on the offense, sponsoring messages through National Public Media, NPR’s sponsorship branch, on five NPR affiliates in San Francisco, Los Angeles, and Sacramento. In San Francisco, the ads appear to be running during peak driving hours, during Morning Edition and All Things Considered.

When asked in an email about the reason for the ads, the Almond Board’s Stacey Humble said, “The radio spots were developed more recently to serve our California communities’ need for more recent, accurate research and information reflecting the almond industry’s innovation and commitment to sustainable growing practices.” 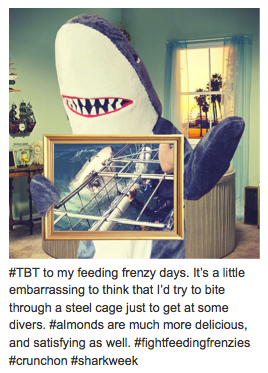 An Instragram shot from the Almond Board’s Shark Week campaign.

The ads coincide with other Almond Board PR pushes over the past month. In late June, the Board announced that it would spend $2.5 million on research devoted to sustainable farming practices, including projects targeting water management and honeybee health. It also launched an oddly elaborate Shark Week campaign in the beginning of July, featuring the adventures of a shark who’s stopped being preying on people after he discovered the wonders of the crunchy snack.

On the website publicized in the radio ad, entitled “Get the Facts about Almonds and Water,” the Board argues that acre for acre, almonds use about the same amount of water as other fruits and veggies, and almond growers have cut water use per pound of product by 33 percent in the past two decades.

Despite their water use, almonds are more popular than ever, with Americans eating two times the amount of almonds per year as they did just seven years ago. But the continued drought has leaders in the industry worried—particularly as crop production is declining slightly despite increased acreage.

“The biggest concern for almond users continues to be the impact of ongoing drought on California almond production and how long it could be before sufficient water is available to reverse the downward yield trend,” read a recent Blue Diamond report. Increased demand and shorter supply is causing almond prices to soar. “Almonds a year ago were priced at about $3.30, and we thought that was an exorbitant price,” said Stephen Smith, the CFO of Hain Celestial, a food company that sells almond butter and almond milk. “And here we are looking at prices in the mid-$4 range.”