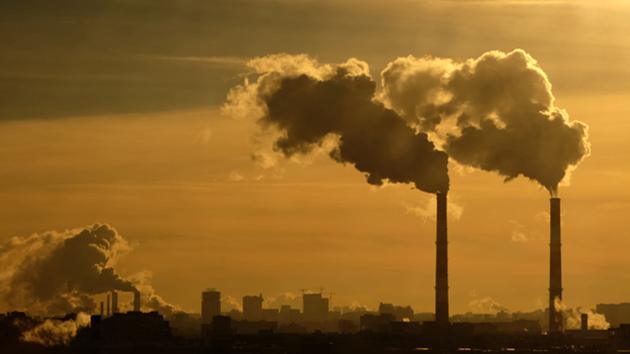 Reading about ocean acidification is usually a bummer: A hefty portion of the carbon dioxide we’re spewing into the atmosphere is getting absorbed into the oceans, where it is killing off sea creatures (including some of the most delicious ones) and ruining coastal economies. Each report on the topic seems more dire than the last. Just a couple weeks ago, a team of experts found, in BBC’s phrasing, that “CO2 from burning fossil fuels is changing the chemistry of the seas faster than at any time since a cataclysmic natural event known as the Great Dying 250 million years ago.” Awesome.

But what if ocean acidification could also offer a new way to compel the US government to get serious about regulating carbon emissions? That’s the idea that a former EPA scientist and lawyers at the nonprofit Center for Biological Diversity have now seized on.

“It’s a novel approach that I doubt EPA was expecting,” says Miyoko Sakashita of the Center for Biological Diversity.

Last month, the center filed a petition to the EPA asking it to regulate CO2 under the Toxic Substances Control Act (TSCA). Under the law, EPA has 90 days to either grant the petition and begin the rulemaking process, or reject it and explain its reasoning. EPA declined through a spokesperson to comment, citing its practice of not discussing the merits of pending petitions, and the White House did not respond to a request for comment.

“It’s a novel approach that I doubt EPA was expecting,” says Miyoko Sakashita, oceans director at the Center for Biological Diversity.

The idea originated about five years ago when Donn Viviani, a former director of climate policy for EPA, retired from the agency. “I worked at EPA for a long time in a lot of different roles,” Viviani recalls. “I ended up working in climate, before that I did water stuff and toxic stuff. If carbon dioxide wasn’t a toxic substance in terms of ocean acidification, then nothing was.”

Under TSCA, EPA regulates the distribution and use of chemicals “when they pose an unreasonable risk to health or to the environment.” Viviani reasoned that the science is clear at this point that one way carbon dioxide poses an unreasonable risk to the environment is by changing the pH balance in oceans. And by killing fish, it poses a risk to the health of humans who eat seafood—or who should, anyway, since it’s a healthier source of protein than most meats.

The federal government acknowledges as much itself. Just look at what the National Oceanic and Atmospheric Administration says on the science: “Studies have shown that a more acidic environment has a dramatic effect on some calcifying species, including oysters, clams, sea urchins, shallow water corals, deep sea corals, and calcareous plankton. When shelled organisms are at risk, the entire food web may also be at risk. Today, more than a billion people worldwide rely on food from the ocean as their primary source of protein.”

So Viviani wrote up the petition and shopped it around to environmental organizations, looking for one to sponsor it. “EPA gets a lot of crackpots, and I didn’t want [to be seen as one],” Viviani explains with a laugh. “As impressed as I am with myself, I don’t know if they would be as impressed.” Most groups turned him down. One possible reason is that green groups and consumer advocates have been pushing for years to rewrite TSCA to make it stronger. TSCA reform is currently working its way through Congress, and raising the specter of using the law to regulate CO2 could alienate Republicans and throw a wrench in that process. Eventually, though, the Center for Biological Diversity signed on.

So what happens if EPA does grant the petition? Well, writing a regulation takes years and it is a multi-step process with many opportunities for industry to lobby against it and congressional Republicans to try to defund it. Ultimately, regulation of CO2 under the TSCA would require a sympathetic president, which means the winner of next year’s election would have to care a lot about climate change. Given the idea’s newness, it’s too soon to predict whether Democratic candidates might support this approach, but it’s probably safe to say that all the climate science–denying Republicans won’t.

“If carbon dioxide wasn’t a toxic substance in terms of ocean acidification, then nothing was,” says former EPA official Donn Viviani.

With a climate hawk in the White House, though, it could be a powerful weapon in the effort to combat carbon emissions—and therefore slow climate change as well as ocean acidification. Right now the EPA has the power to regulate CO2 under the Clean Air Act, and it’s doing so—from requiring vehicles to be more fuel-efficient to crafting rules for emissions from power plants. The TSCA would allow the agency to go further. Since normal air pollution dissipates over time, the Clean Air Act is designed merely to cut down on the amount of air pollution being produced, letting nature take care of the rest. The TSCA, in contrast, is designed to deal with toxic chemicals, which don’t necessarily just dissipate, so it can be used to require not just forward-looking efforts like pollution controls, but remediation, like biosequestration of carbon through tree planting and wetlands restoration.

The catch is that the TSCA requires that EPA not create excessively burdensome or expensive regulations. Any attempt to regulate CO2 under TSCA would be certain to attract legal challenges. And the more ambitious a rule, the bigger the risk that a conservative court throws it out.

Viviani is confident that EPA will have to grant the petition on the merits. If the agency rejects it, it would have to argue that the science shows ocean acidification isn’t an unreasonable risk to the environment, which it clearly is, or that the science isn’t sufficient, which would compel it to study the issue further. Viviani anticipated potential counterarguments and preemptively addressed them in the petition. For example, he argues that by making seafood more rare, and thus more expensive, people are pushed toward potentially pesticide-ridden farmed fish, so there is a cumulative impact on human health that must be considered.

Regulating carbon dioxide as a toxic substance may sound unlikely now, but then so did regulating it as an air pollutant at one time. If nothing else, this will help start a larger conversation about ocean acidification, the threat it poses, and what legal levers can be used to address it.