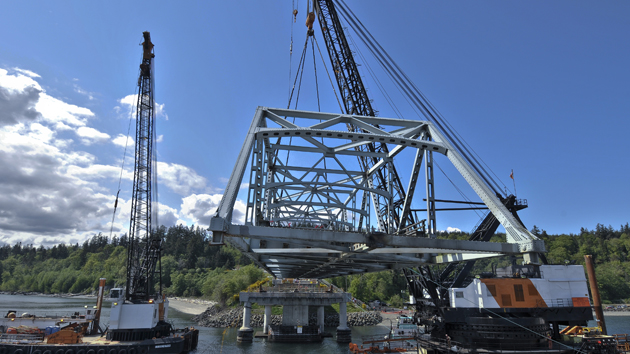 This story was first published by CityLab and is reproduced here as part of the Climate Desk collaboration.

The federal gas tax that pays for America’s highways hasn’t been raised in decades, but that doesn’t stop some determined lawmakers from trying. The latest effort comes via Sen. Tom Carper of Delaware, who has introduced a plan to raise the tax four cents a year for four years then index it to inflation so it remains effective over time. The move would ultimately bring the fuel tax to 34 cents a gallon—nearly double the existing rate of 18.4 cents.

That might seem like a big bump, but even a gas tax twice as high as the current one would be incredibly low by global standards. A US Department of Energy review of fuel taxes among Organization for Economic Co-operation and Development (OECD) countries in 2011 placed the US just about at the bottom of the pack. Kyle Pomerleau of the Tax Foundation recently updated these figures to reflect 2013 tax rates via OECD data—and found very little change. 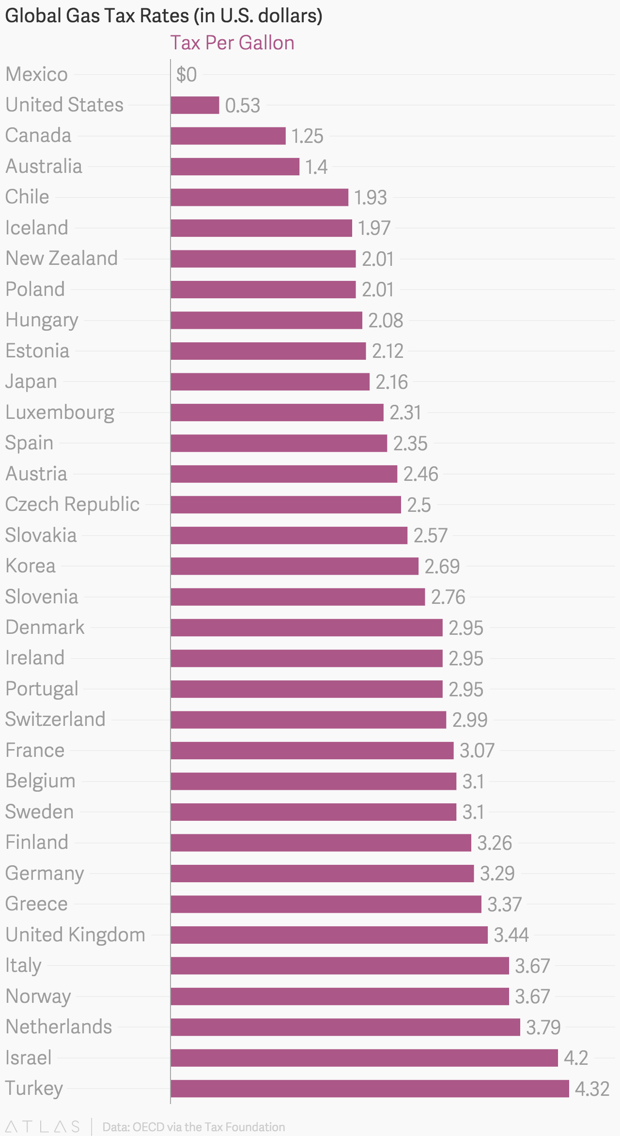 The US rate of 53 cents a gallon reflects the federal gas tax as well as the average state tax. Adding Carper’s 16 cents wouldn’t budge the US position way at the back of the pack—nor would doubling the entire 53 cent average. As the numbers stand, lawmakers would have to raise the average gas tax at least eight-fold for Americans to pay the steepest rate in the world.

In that context, Carper’s plan seems like quite the bargain. A higher gas tax would help stabilize the Highway Trust Fund, which has staved off bankruptcy in recent years through a series of short-term funding patches and dubious transfers from the general taxpayer fund. And 34 cents is about what the gas tax would be today if it were indexed to inflation anyway, according to the Institute on Taxation and Economic Policy. The legislation even comes with a tax credit to reduce the hardship high fueled costs cause for the car-dependent middle class.

So what’s not to like? The short answer if you’re a federal lawmaker: the entire discussion. Official routinely dismiss gas tax hikes out of hand; as Paul Ryan said this June, We’re not going to raise the gas tax.” As James Surowiecki recently wrote in The New Yorker, the opposition begins with anti-tax conservatives but extends to liberals who fear political reprisal—creating a bloc of Congressional inaction that defies general bipartisan support for road maintenance, as well as common sense:

Indeed, the refusal of Congress to raise the gas tax is the ultimate expression of how reflexive and irrational the resistance to taxes has become. Opposition to higher income taxes has some theoretical justification: higher marginal rates discourage people from working more and investing. Seen in one light, they’re a penalty for success. But no such argument exists against the gas tax: all it does, in essence, is ask drivers to pay for the roads they use.

There are arguably better ways to get drivers to pay for roads—a per-mile driving fee chief among them—but none with the ease of implementation and immediate funding relief that even a modest gas tax hike like Carper’s would provide. Americans should one day strive to pay the full social cost of driving. Until then, recovering enough money to pay for basic highway upkeep is the least that good government can do.