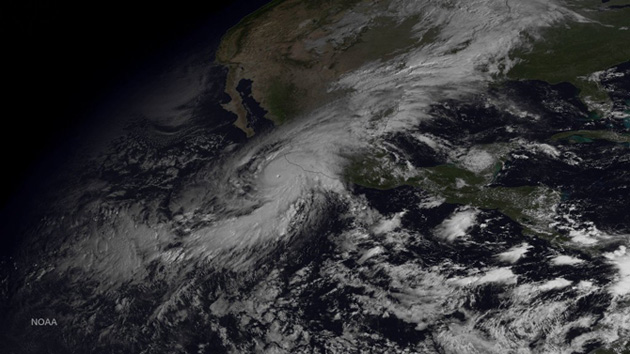 Update: Hurricane Patricia slammed into the Mexican state of Jalisco Friday evening, bringing with it winds of 165 miles per hour. According to the Weather Channel, that makes it the most powerful hurricane in recorded history to reach Mexico’s Pacific coast. In the hours before the storm made landfall, Patricia’s winds had reached 200 miles per hour—the highest winds ever recorded for a Western Hemisphere hurricane. According to the National Hurricane Center, the storm remains “extremely dangerous” as it moves inland.

Sea level has risen by ~8 inches in Manzanillo, Mexico over the last 50 years. Climate change made #Patricia worse. https://t.co/tm0gwpIhbg

Original story: The strongest hurricane ever recorded in the Western Hemisphere is barreling toward Mexico’s Pacific coast, where it is expected to make landfall later on Friday. According to the National Hurricane Center (NHC), Hurricane Patricia now has maximum sustained wind speeds near 200 miles per hour and even higher wind gusts. That makes it a Category 5 storm—the highest rating on the Saffir-Simpson hurricane scale.

Hurricane warnings are currently in effect for much of the Mexican states of Nayarit, Colima, and Jalisco, including the resort city of Puerto Vallarta, whose metropolitan area is home to 380,000 people. Tens of thousands of people are being evacuated, according to the Vallarta Daily. 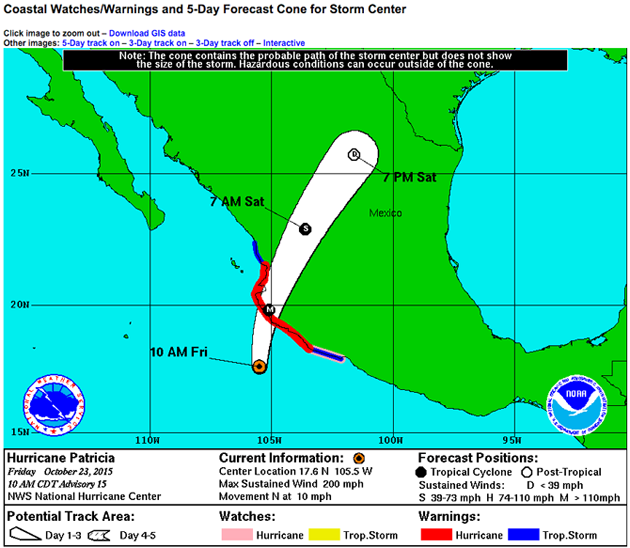 Category 5 hurricanes are terrifying. According to the NHC, during a typical storm of this strength, “a high percentage of framed homes will be destroyed, with total roof failure and wall collapse. Fallen trees and power poles will isolate residential areas. Power outages will last for weeks to possibly months. Most of the area will be uninhabitable for weeks or months.” The NHC is predicting that Patricia will make a “catastrophic landfall,” dumping up to 20 inches of rain in some areas, which will likely result in “life-threatening” flash floods and mudslides. There will also be an “extremely dangerous” storm surge that will cause substantial coastal flooding “accompanied by large and destructive waves.”

The remnants of the storm could even help produce heavy rainfall along the Texas coast in a few days.

Hurricane Patricia’s incredible power may be part of a disturbing pattern. As Chris Mooney reported for Climate Desk a couple of years ago, a number of the world’s major hurricane basins have set (or have arguably set) new hurricane intensity records since the year 2000.

Just yesterday, #Patricia was a tropical storm. Now it’s the strongest hurricane in E Pacific history. A reminder of our weird new normal.

#Patricia from when it was named to this morning’s no words 200mph/880mb status. Most strengthening past 30 hrs. pic.twitter.com/tZku6pc9f4

Here’s the view from space of the powerful Category 5 Hurricane #Patricia: https://t.co/mN4dapSoKj https://t.co/3FgprQnEsu