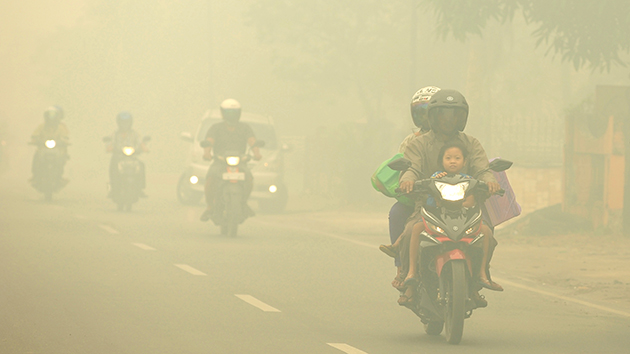 Thick haze from forest fires shrouds the city of Palangkaraya in Indonesia on Tuesday.AP

On Monday afternoon, Indonesian President Joko Widodo cut short a visit to the United States and headed home to oversee efforts to extinguish a rash of epic wildfires that have engulfed his country.

Joko was in Washington, DC, for a photo op with President Barack Obama, to talk about climate change, and to promote Indonesia as a choice venue for foreign investors. His trip was also supposed to include a stopover in San Francisco for meetings with tech industry executives. But Joko’s decision to return to Indonesia early underscores the challenges his country faces in stopping the worst deforestation on Earth—deforestation that is playing a critical role in global climate change.

There’s more to global warming than pollution from cars and power plants. In the United States, coal-fired power plants are the No. 1 source of carbon dioxide emissions, followed by tailpipe emissions from cars and trucks. That’s why the Obama administration has focused its climate policies on those sources; Obama’s signature plan aims to reduce power-sector emissions by one-third by 2030. Those policies get some natural help from the ecosystem, as trees and soil soak up carbon out of the atmosphere. In the United States, thanks to forest conservation and climate-friendly farming practices, land use (a term climate wonks use to describe emissions that come from the land rather than from man-made infrastructure and vehicles) actually offsets about 13 percent of the greenhouse gas emissions from the rest of the economy.

But on a global scale, land use is a source of greenhouse gas emissions, rather than a sink. The biggest culprit is deforestation: Living trees store carbon; dead trees release it back into the atmosphere as they decompose. Emissions from crop soil, fertilizer, and livestock also play a major role. Overall, land use accounts for about one-quarter of the world’s total greenhouse gas footprint.

In Indonesia, the situation is even more dire. According to the World Resources Institute (WRI), land use represents 61 percent of the country’s greenhouse gas emissions. That means deforestation causes far more climate pollution than all of the country’s cars and power plants combined.

In fact, Indonesia has the world’s highest rate of deforestation, even higher than Brazil, which contains most of the Amazon rainforest. From 2000 to 2012, according to research published in Nature, Indonesia lost more than 23,000 square miles of forest to logging, agriculture, and other uses. That’s roughly the size of West Virginia. In 2010, the government attempted to put the brakes on deforestation by exchanging a two-year moratorium on new logging permits for $1 billion in aid from Norway and the United States. But according to Susan Minnemeyer, a forest analyst at the WRI, that policy appears to have had the “perverse impact of accelerating [deforestation], because those with permits felt that they had to take action quickly or they would no longer be able to.”

This all adds up to global-scale pollution: Indonesia is the world’s fifth-ranking greenhouse gas emitter, coming in just behind Russia and India. In other words, we can’t stop climate change without saving Indonesia’s rainforests.

Indonesia is in the middle of a public health crisis from forest fire haze. The problem isn’t just deforestation, but how that deforestation is happening. In Indonesia, forests are often cleared out with fire. This can be done legally with a permit, but it’s often carried out illegally as well. This year, forest fires are also being fueled by El Niño-related weather patterns. The combination of El Niño and intentional deforestation has proven incredibly dangerous: The country has experienced nearly 100,000 fires so far this year, the worst since the last major El Niño in 1997. Fire activity typically ramps up in September and October, the end of the dry season, and over the last couple of weeks the conflagrations have grown to crisis proportions—hence Joko’s hasty return. The fires are so big they can be seen from space.

The greenhouse impact from those fires is staggering: On several days over the last month, emissions from Indonesian forest fires have exceeded all emissions from the US economy: 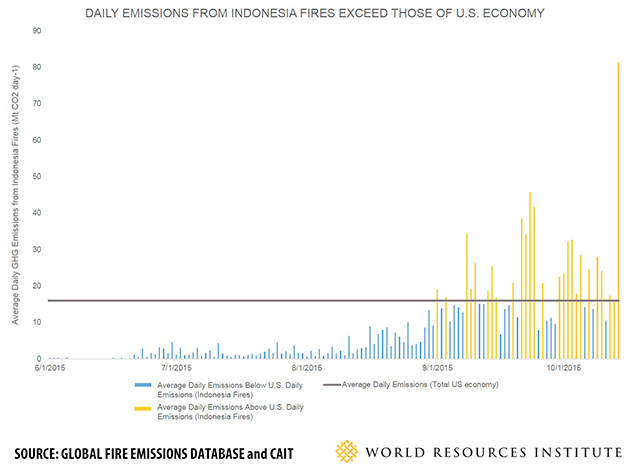 To make matters worse, more than half of those fires occur on land made of peat, the thick, soil-like material made from decomposed plant matter. Peat is packed with carbon, and fires that occur on peatland can have a global warming impact 200 times greater than fires on normal soil, according to the WRI. Last week, Joko said the government would stop issuing new permits for commercial development on peatland, but that won’t stop the fires that are already burning.

Climate pollution is just part of the problem. Firefighting costs are pushing $50 million per week. The impact of this fire season on Indonesia’s economy could reach $14 billion. And the thick blanket of haze that is stretching from the country across Southeast Asia has caused at least 10 deaths from haze-related illness and 500,000 cases of acute respiratory illness.

Your snacks and makeup are part of the problem. Of course, Indonesians aren’t just chopping and burning down trees for fun. Besides logging, one of the main uses for cleared land is to plant African oil palm, the fruits of which are used to produce palm oil. Palm oil is the world’s most popular form of vegetable oil, and half of it comes from Indonesia. It’s also found in about half the processed food you encounter in a grocery store (as well as many cosmetics).

“There has been very weak enforcement of Indonesia’s environmental laws.”

Palm oil has some advantages over other oils: It’s cheap to produce and doesn’t contain trans fats, and the trees yield far more oil in the same land area—using fewer chemical fertilizers—than soybeans or sunflowers. According to the World Bank, the increase in global demand for cooking oil by 2020 could be met with palm oil using one-seventh the land area that would be required to fill that demand using soybeans. For that reason, it could actually have many environmental advantages over other types of oil.

Unfortunately, much palm oil production now happens in highly vulnerable ecosystems, often in the former habitats of endangered animals such as tigers and orangutans. Pressure is growing on Indonesia’s palm oil producers to stop deforestation and stay out of sensitive areas. A handful of major US food processors, including Nestlé and PepsiCo, have adopted commitments to rid their supply chains of palm oil linked to deforestation, according to a report from the Union of Concerned Scientists. But that report also that found many fast-food chains are lagging behind. Last year, an Indonesian court ordered the first-ever major fine—$30 million—for a palm oil company found to have cleared forest in protected orangutan habitat.

Indonesia’s climate test. For the international climate negotiations coming up soon in Paris, Indonesia has pledged to increase its emissions over the next 25 years by 29 percent less than it would have under a “business as usual” scenario. That won’t be possible without curbing forest fires and deforestation. So for Indonesia, getting a grip on palm oil producers will be even more important than going after power plants, as Obama is doing. Joko has been moving in the right direction, Minnemeyer said, but it’s unclear how his promises will hold up.

“Across the board, there has been very weak enforcement of Indonesia’s environmental laws,” she said. If they’re going to meet their climate target, “the fires are going to be a key part.”