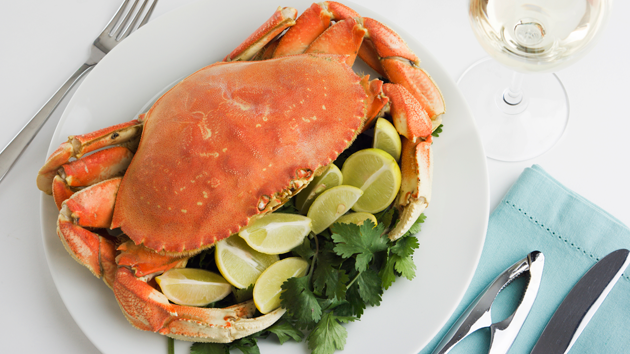 Fisherman from across the West coast are flocking to California, where the start of crabbing season is just days away. Or not: Health officials are warning that rock and Dungeness crabs along the state coast are contaminated by high levels of domoic acid, a known neurotoxin. State authorities are expected to decide this week whether or not to delay the opening of the Dungeness season—which yields one of the biggest harvests in the nation—and temporarily halt the harvest of rock crabs, which is permitted all year. In the meantime, here’s what you need to know:

How do I know whether that crab on I ordered last week was contaminated? Commercial seafood is regularly tested, so while there may be less Dungeness crab, you don’t have to freak out too much about consuming neurotoxins with the crab you ate at a restaurant or bought at a store. West Coasters should avoid eating recreationally caught shellfish (more details here). If domoic acid is ingested, it can cause vomiting, seizures, and in extreme situations, death. There haven’t been any reported hospitalizations or deaths from domoic acid poisoning since the late 1980’s, when three deaths and multiple hospitalizations spurred increased regulation.

Besides Dungeness crabs, are any other marine creatures are affected? Yes, lots. according to a NOAA report released Tuesday, domoic acid is showing up at potentially lethal levels among a record number of animals, including dolphins, whales, sea lions, and seabirds, and causing seizures among the latter two. Washington closed some areas to crabbing and clam digging earlier this year, Oregon has indefinitely postponed the start of its razor clam season, and California health officials have warned against eating recreationally caught shellfish in some regions. 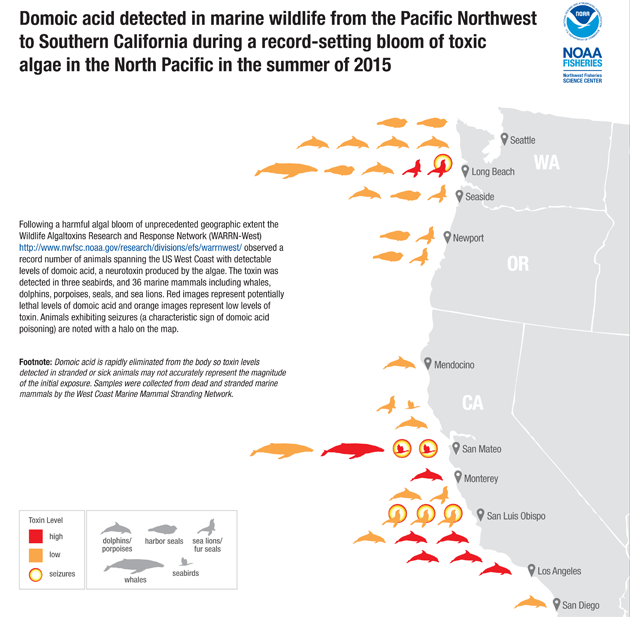 What’s this going to do the West Coast’s robust crabbing industry? California, Oregon, and Washington are the top producers of Dungeness crab in the United States; in California alone, commercial crabbing boats brought in 17 million pounds of the crab in 2014, worth nearly $60 million. Some fishermen make half of their income from the California Dungeness crab harvest, and the bloom is particularly ill-timed since Dungeness crabs are in highest demand between Thanksgiving and New Years. “These are incredibly important fisheries to our coastal economies and fresh crab is highly anticipated and widely enjoyed this time of year,” said the state Fish and Wildlife regional manager Craig Shuman. “But public health and safety is our top priority.”

Where is the domoic acid coming from? The acid is coming from a toxic phytoplankton, or algae, species that thrives in warm waters and makes its way into the food web as it’s consumed by anchovies, sardines, and shellfish. This year, thanks to a combination of El Niño and a large stretch of warm water off the west coast dubbed “the blob,” the algae has bloomed at record-setting levels, forming a ribbon up to 40 miles wide snaking up the West coast.

Is climate change causing this problem? Scientists are reluctant to attribute any one event solely to climate change, but warmer waters are certainly playing a role—and ocean temperatures are expected to continue warming with climate change. “The toxins are commonly present in the food web but this year, with this unprecedented bloom, they’re likely having a bigger impact than ever before,” said Kathi Lefebvre, a biologist at the Northwest Fisheries Science Center. “Our concern is that there does appear to be a link between warm water and bigger blooms, so what does this tell us about future years with warmer conditions?”