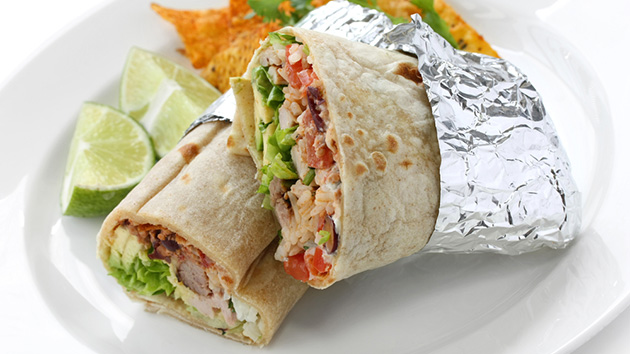 This image is for illustration purposes only and does not reflect the proper way to serve or consume a burrito. Especially the Doritos.bonchan/Shutterstock

As of December 4, the Centers for Disease Control and Prevention had found 52 cases of people in nine states who had gotten sick after eating at Chipotle Mexican Grill. The outbreak, which involves a strain of E. coli, has hospitalized 20 people and has forced the fast-casual chain to revise its 2016 financial forecast. The illness may or may not be linked to what passes for burritos at Chipotle; so far, the ingredient to blame hasn’t been identified.

Nonetheless, let’s peel back the foil and take a closer look at burrito safety.

How many Americans get sick from eating burritos each year? According to the CDC’s mouth-wateringly named Foodborne Outbreak Online Database (FOOD), there were four burrito-related outbreaks resulting in 83 illnesses reported last year. That’s about 0.5 percent of all cases of foodborne illness recorded by the CDC. In comparison, tacos were linked to eight outbreaks and 73 illnesses in 2014; hamburgers were tied to five outbreaks and 59 illnesses. The burrito’s culinary nemesis, the wrap, was connected to two outbreaks claiming 61 victims.

While those numbers are relatively low, there have been big burrito outbreaks in the past. In August 1998, a “burrito associated outbreak” in Hillsborough County, Florida, caused 644 elementary school kids in 66 schools to lose their lunches after eating lunch. (Not to be confused with the Hillsborough County Schools Soft Taco Outbreak of October 1998.) The culprits were identified as frozen beef and bean burritos made in Chicago. That incident was one of 16 gastrointestinal outbreaks “associated with eating burritos” between 1997 and 1998. A 2006 article, titled “Mysterious outbreaks of gastrointestinal illness associated with burritos supplied through school lunch programs,” ruled out “mass psychogenic illness” as the cause of these types of unfortunate events.

Burritos often contain common pathways for foodborne illnesses—beef, chicken, and/or lettuce. (This is not a comment on whether a real burrito has lettuce in it; I’m just stating facts.) But burrito-related sicknesses have also been linked to contaminated tortillas. The CDC’s data doesn’t point to any one filling being more likely to make you sick.

Most burrito-based outbreaks can be traced back to restaurants; schools are the next most common source of bad burritos. (The CDC has recorded two burrito-linked outbreaks at prisons and jails.) Not surprisingly, no state has had as many burrito-related outbreaks as California, home of the galaxy’s best burritos.

So if you do get a bad burrito, what’s gonna happen? The good news is that you won’t die. The CDC has no recorded cases of anyone dying from eating a burrito. But you’ll probably feel pretty rotten. The most common cause of burrito-borne illness is Clostridium perfringens, which usually causes stomach cramps and diarrhea for a day, but not vomiting. The type of E. coli behind the Chipotle outbreak is relatively rare, but it’s nasty. It can cause cramps, bloody diarrhea, and vomiting, and can lay you low for as long as a week.

Okay, you may now fight over burritos in the comments.