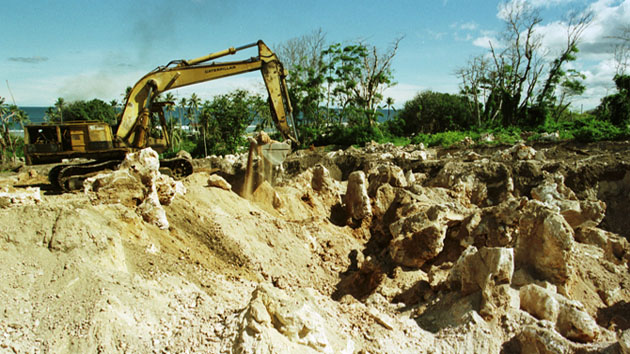 This story was originally published by Newsweek and is reproduced here as part of the Climate Desk collaboration.

You’ve probably never heard of Nauru. But you might want to learn its name. It may not be around much longer.

Nauru is a speck in the South Pacific. It’s the tiniest island nation and the third smallest nation in the world. At roughly 8 square miles and with just over 10,000 residents, Nauru isn’t exactly a political heavyweight on the world stage. But Nauru is sinking, drying out, and generally in peril due to the ever-accelerating effects of climate change. And it may spark a debate at the Paris climate talks currently underway about what to do with populations on the verge of becoming climate refugees with literally nowhere to go.

Nauru is not your typical drowning-island scenario. What used to be a Pacific island oasis is now, by many accounts, a physical example of how quickly paradise can be destroyed. In the early 1900s, a German company began strip-mining the interior of the island for phosphate, the main component of agricultural fertilizer. Then came Japan, which occupied the country during World War II, and continued the phosphate mining. The U.S. bombed Japan’s airstrip on Nauru in 1943, preventing food supplies from entering the island. Less than a year later, Japan deported 1,200 Nauruans to work as forced laborers on a nearby island—only 737 of them survived the ordeal to be repatriated after the war just three years later. After the war, Australia took control of the country, and phosphate mining resumed as an Australian enterprise, before mining rights were transferred to Nauru when the nation became independent in 1968.

For more than three decades after that, Nauruans enjoyed the second highest per-capita GDP of any nation in the world. Western food arrived on the island, where topsoil is scant and little food is grown locally. Now, “instant noodles, soda and anything in a tin” are the staple foods on Nauru, according to NPR. Rates of Type 2 diabetes are high, and until recently, Nauru held the title of the nation with the highest obesity rate. Nearly 40 percent of Nauruan men are obese, four times the global average.

But in the early 2000s, the phosphate ran out. By that time, 80 percent of the sland’s land area had been strip-mined. In a This American Life report from 2002, journalist Jack Hitt described peering into the interior of the island as “one of the scariest things I’ve ever seen.”

“Almost all of Nauru is missing, picked clean, right down to the coral skeleton supporting the island…[it’s all] blindingly white,” he said.

Today, almost all of Nauru’s economy is based on foreign assistance and income generated by a controversial Australian detention center, sometimes referred to “Australia’s Guantanamo,” used to detain refugees seeking asylum in Australia. Refugees from Syria, Iraq, and other war-torn nations have been held there for years under what critics say are harsh conditions; the center has sparked a human rights debate in Australia.

Meanwhile, the complete destruction of the island’s interior has severely limited Nauruans’ ability to adapt in the face of climate change. People can only live on a thin strip around the perimeter, which means, unlike many other island nations, there’s nowhere to move to even temporarily avoid sea level rise, explains Koko Warner, a lead author for the Intergovernmental Panel on Climate Change’s Fifth Assessment Report and an expert on climate change-related human migration. According to a survey of Nauruans she and colleague Andrea Milan recently conducted for United Nations University, 40 percent of households on the island say they’ve already experienced sea level rise in the last ten years.

Nauruans’ precarious coastal living makes them uniquely vulnerable to extreme storms, which scientists predict climate change will make make more severe in the region. “A one-degree change in the path of the cyclone could make all the difference,” Warner says.

Nauru’s other big problem is drought. The country has no clean groundwater nor does it have any lakes or rivers to supply freshwater, according to Warner and Milan’s report. The rainy seasons have become irregular, and more than half of Nauruans say they’re concerned about drought.

What does that mean for the future of Nauru? “In the coming five-to- 10 years, barring a massive cyclone, life will probably continue more or less the same. But pushing beyond 10 years, real uncertainty arises,” Warner says. One thing is certain: Without freshwater stores, and without the ability to migrate within their own country, Nauruans will have to go somewhere; 30 percent of the island’s population, according to Warner’s survey, say they’d likely migrate if drought, sea level rise, and flooding worsens.

Already, the neighboring island nation of Kiribati has leased land on Fiji in anticipation that its residents will become climate change refugees. Nauru hasn’t followed in Kiribati’s footsteps—and  only one quarter of Nauruans say they have the financial means to make migration possible themselves.

“Without improved access to international migration, some Nauruans will be ‘trapped’ by worsening environmental conditions, declining well-being and no opportunity to either migrate or generate income necessary for adapting,” Warner and Milan wrote. There must be a way, Warner says, for a country to learn how to best make migration possible, and there must be an international structure in place for such a country to seek funding for it.

But the impact of a warming planet on human migration needs were, until recently, largely absent from international climate change talks, Warner says. Now, nations are beginning to pay attention: The European Commission’s webpage for the Paris climate talks, for example, calls it a “crisis in the making,” noting that the “greatest single impact” of climate change “could be on human migration, with millions of people displaced by shoreline erosion, coastal flooding and agricultural disruption.”

It remains to be seen if the final document to come out of the Paris talks—expected to emerge Saturday—will include language that addresses migration, but Warner is hopeful. “‘Human mobility,'” she says. “The words need to be in there.”