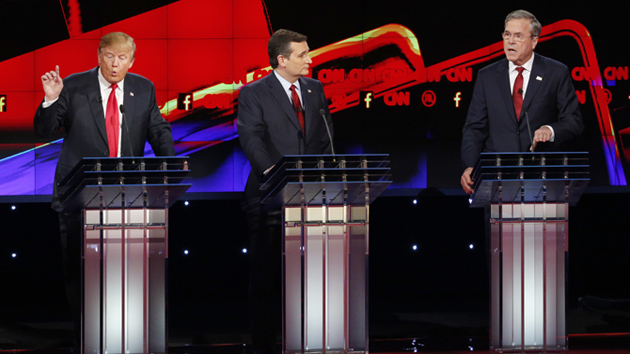 
This story originally appeared on Grist and is reproduced here as part of the Climate Desk collaboration.

Republicans didn’t even wait for a global climate change deal to be struck in Paris to start undermining it.

Last month, congressional Republicans were loudly discouraging other nations from signing onto any agreement, arguing that the US won’t keep up its end of the bargain if a Republican wins the 2016 presidential election. And they passed bills that would repeal the Clean Power Plan, the new set of EPA restrictions on carbon pollution from coal-fired power plants, which is the centerpiece of the Obama administration’s strategy for meeting its emissions targets under the Paris Agreement.

While US negotiators were hard at work in Paris trying to secure a deal, congressional Republicans kept working hard to make the US look insincere. The House passed an energy bill that would expedite permitting for oil and gas projects such as pipelines and expand liquefied natural gas exports. Sen. Ted Cruz (R-Texas), who is running for president, held a hearing stuffed with climate science deniers, including one who Greenpeace revealed is on the fossil fuel industry’s payroll. Republicans in Congress have also voted to end the crude oil export ban as part of the budget deal. That policy change would be a giveaway to the oil industry that would increase domestic oil production at the expense of the environment.

Once a deal came out of Paris, naturally Republicans started criticizing it. Sen. James Inhofe (R-Okla.), chair of the Environment and Public Works Committee, complained—nonsensically, since he doesn’t even accept climate science in the first place—that the agreement does not hold countries such as China and India to strong enough standards. Anyway, he promises to interfere with any effort to meet our emissions targets or climate finance commitments.

Senate Majority Leader Mitch McConnell (R-Ky.) said President Obama “is ‘making promises he can’t keep’ and should remember that the agreement ‘is subject to being shredded in 13 months,'” according to the Associated Press. As AP explains, “McConnell noted that the presidential election is next year and the agreement could be reversed if the GOP wins the White House.”

The US—as the world’s largest economy, largest historic polluter, and second-largest present-day carbon polluter—is an essential player in any functioning global climate agreement. Well aware of this, President Obama made a huge and largely successful effort on climate diplomacy over the last year, crafting bilateral agreements with key nations such as China, India, and Brazil in order to lay the groundwork for an international deal.

Republicans, knowing the importance of US cooperation, are eager not only to kneecap any US climate policy, but also to prevent global cooperation on climate change. Perhaps they fear that a future Republican president will face more pressure from allies and trading partners to address climate change now that everyone else in the world has already committed to do so.

So over the next five years, until the world comes together again in 2020 to hopefully negotiate a stronger set of national targets, congressional Republicans will be working to destroy the agreement and its future potential by preventing the US from keeping its word. Their game plan will be to undo the Clean Power Plan and revoke US pledges of financing to assist developing nations with expanding clean energy and adapting to climate change.

How this plays out will depend on the outcome of the next presidential election. All of the leading Republican presidential candidates are climate science deniers who oppose the Clean Power Plan. On the campaign trail this week, most of them have avoided any discussion of the Paris Agreement. All but one of the top nine GOP campaigns did not respond to a query on the subject from The New York Times.

Republicans have settled on the talking point that the Paris Agreement will harm our economy without bothering to produce any evidence of that.

The one Republican candidate who responded, Gov. John Kasich of Ohio, via a spokesman, had a perverse take: “While the governor believes that climate change is real and that human activity contributes to it, he has serious concerns with an agreement that the Obama administration deliberately crafted to avoid having to submit it to the Senate for approval. That’s an obvious indicator that they expect it to result in significant job loss and inflict further damage to our already sluggish economy.” But Senate Republicans have always made it clear that they wouldn’t approve any kind of climate treaty, no matter what the expected economic impacts. That’s why Obama pushed the world to adopt a more flexible agreement that doesn’t require Senate approval. Kasich is blaming Obama for a condition of his own party’s making. In the GOP presidential debate on Tuesday night, Kasich briefly mentioned the Paris negotiations, only to ridicule the idea of discussing climate change instead of how to combat ISIS. That was the only mention of climate change in the entire two-hour debate on foreign policy.

Sen. Marco Rubio (R-Fla.), another presidential contender, weighed in on the Paris Agreement from the campaign trail, calling it “ridiculous,” and adding, “unilateral disarmament in our economy is reckless, and it is hurting the American Dream.”

Republicans, it seems, have settled on the talking point that the Paris Agreement will harm our economy without bothering to produce any evidence of that. Their claim seems to rest on the premise that the Clean Power Plan will raise electricity costs. But in fact, studies have found that the CPP will actually lower electricity bills for the average American family, thanks to the energy-efficiency provisions. Other studies have found that the jobs lost in the coal industry under the CPP will be vastly outweighed by jobs created in renewable energy and productivity gains across the economy from lower electricity costs.

And certainly there is nothing “unilateral” about our “disarmament.” The European Union, for example, is cutting emissions more drastically than the US And while developing countries aren’t pledging bigger cuts than the US, they already have much lower emissions per capita and smaller economies, so they are offering more significant limits in relative terms.

If a Republican wins the White House, he will get cooperation from the Republican House to repeal the Clean Power Plan.

We don’t need to wait for the other Republican candidates to talk about the Paris Agreement to know what they think of it. The League of Conservation Voters compiled a fact sheet with the comments they made about the COP21 negotiations before the deal was inked. All were critical, with many saying that Obama shouldn’t even have gone to Paris to work for an agreement, and that they wouldn’t have were they in the White House.

If a Democrat wins the presidency next year, the fight over following through on Paris and ramping up for the next agreement will be between her and Congress. If there is a Republican in the White House, he will get cooperation from the reliably Republican House to repeal the Clean Power Plan and end climate funding for developing nations, and those efforts may or may not be aided by the Senate, depending on whether Democrats take control of it in 2016, or at least have enough votes to mount a filibuster.

No matter who becomes the next president, the third branch of government will also have a say. Conservative state attorneys general and corporate fossil fuel interests are challenging the Clean Power Plan in federal court. The presidential election probably won’t determine the court case’s outcome—only a vacancy on the Supreme Court before the case is heard might lead to that—but it will determine how the EPA responds if the rule is overturned. The Supreme Court has already held that EPA has the legal authority to regulate carbon pollution, so if the CPP is overturned, it would mean that the agency could promulgate new regulations on power plants that are more likely to be deemed compliant with the Clean Air Act. But whether their boss wants them to or not will depend on who sits in the White House.

The bottom line: The domestic political fight over the Paris Agreement has just begun.