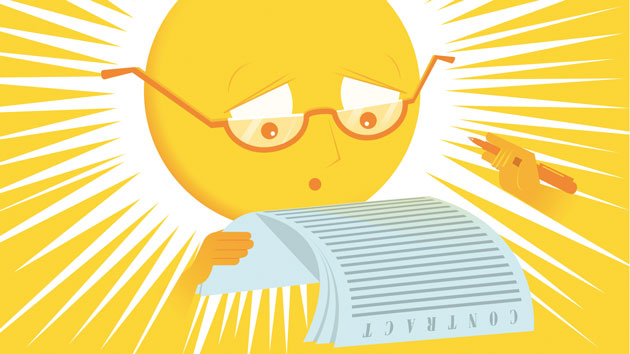 A couple of years ago, Steven Weissman, an energy lawyer at the University of California-­Berkeley, started to shop around for solar panels for his house. It seemed like an environmental no-brainer. For zero down, leading residential provider SolarCity would install panels on his roof. The company would own the equipment, and he’d buy the power it produces for less than he had been paying his electric utility. Save money, fight climate change. Sounds like a deal.

But while reading the contract, Weissman discovered the fine print that helps make that deal possible: SolarCity would also retain ownership of his system’s renewable energy credits. It’s the kind of detail your average solar customer wouldn’t notice or maybe care about. But to Weissman, it was an unexpected letdown.

To understand his hang-up, you need a bit of Electricity 101. If you have solar panels on your roof, the electrons they produce flow across the electric grid like water, following a path of least resistance. As they whiz around, electrons are impossible to track and look identical, whether they’re coming from solar panels, a coal plant, or whatever. But there is value in keeping tabs on the renewable ones, so energy wonks came up with renewable energy credits (RECs), a tradable financial instrument that corresponds to a certain amount of energy produced by a certain renewable source like solar or wind.

By selling the RECs instead of keeping them for yourself, you could just be helping the utility meet a goal it was already mandated to meet.

Because RECs have value—ranging from under a penny to a buck or two for each hour’s worth of electricity your roof produces, depending on the state, companies like SolarCity can sell them and thus help justify giving you the solar panels for little to nothing. The biggest buyers of RECs are power companies looking to satisfy state-mandated clean-energy requirements, known as renewable portfolio standards. In effect, the power company pays for the right to claim the climate benefits of the panels on your roof.

It sounds like an esoteric distinction, but it matters: By selling the RECs instead of keeping them for yourself, you could just be helping the utility meet a goal it was already mandated to meet—thus helping excuse it from building more solar capacity itself. In other words, your direct net contribution to reducing greenhouse gas pollution is nil.

SolarCity CEO Lyndon Rive argues that his REC-less customers are still part of the climate solution by creating the RECs in the first place. “By you installing solar, whether you own the REC or not, every kilowatt-hour [of electricity] you produce is clean,” he said. But the half-­dozen energy economists and lawyers I spoke to—from universities, think tanks, REC brokers, and the federal government—said that solar leasing companies’ marketing can be misleading. “A lot of individuals buy green power because they want to know that the power they’re buying wouldn’t be there unless they bought it,” says Jennifer Martin, executive director of the Center for Resource Solutions, a nonprofit firm that certifies RECs’ authenticity. But if that’s what you think, and you don’t hold onto the RECs, “you’re not getting what you’re paying for.”

Politicians who see solar on their constituents’ rooftops are “going to be encouraged to dream big,” says one expert on renewables.

So does that mean you should skip the panels altogether? Hardly. There are still many good reasons to go solar, including the possibility to save money on your electric bill. Meanwhile, the more people who adopt solar panels, the more the price drops, as panel manufacturers and installers get more efficient. This is already happening, as the cost of solar has plummeted 73 percent since 2006 and could soon be equal to or less than the cost of other electricity in many states. Industry insiders have a rule of thumb that every time production of panels doubles, solar prices drop 20 percent.

Then there’s the powerful “Prius effect,” wherein the conspicuous use of a green product like an electric vehicle or solar panels prompts neighbors to follow suit. That growing customer base can be a source of pressure on governors and state legislators to ramp up their climate ambitions. Politicians who see solar on their constituents’ rooftops are “going to be encouraged to dream big,” said Nathanael Greene, director of renewable-energy policy at the Natural Resources Defense Council. California, the country’s leading solar state, recently boosted its renewable portfolio standards to one of the most ambitious in the country, requiring utilities to get half of their power from renewables by 2030. By 2045, Hawaiian utilities will get 100 percent of their energy from renewables, in accordance with a law passed last summer.

Those factors were enough to tip Weissman in favor of installing panels. While he still thinks it’s misleading to market solar leases as providing green energy if they don’t include RECs, he ultimately decided to sign on the dotted line.

“I think if you have the ability to do so, you should be part of the conversation,” he said, “part of the effort to move us away from fossil fuels.”