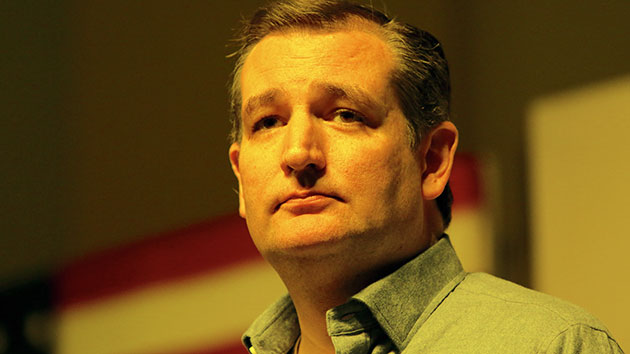 With the Iowa caucuses just a week away, Ted Cruz is duking it out with Donald Trump. But Cruz is also taking a beating from a less well-known opponent: the biofuel industry.

The problem is Cruz’s stance on the Renewable Fuel Standard, a federal mandate that requires fuels made from corn, sugarcane, and other biological sources to be mixed into the nation’s gasoline supply. The most prominent of these fuels is ethanol made from corn. Cruz wants to abolish the RFS (along with all government mandates and subsidies for energy, including for fossil fuels and renewables). Last week in New Hampshire he described the RFS as yet another way in which the government is “picking winners and losers.”

That position sets him apart from the other Iowa front-runners, Republican and Democrat alike. Hillary Clinton and Bernie Sanders have both expressed support for the RFS. Trump recently said he wants to increase the mandate.

Cruz’s opposition to ethanol mandates puts him in a place you’d never expect to find him: on the right side of a debate about climate change.

Cruz’s position could be a major liability in Iowa, where the RFS has become one of the most important corn-related federal programs and is a major fixture in the state’s politics. Iowa produces by far the most corn-based ethanol and thus arguably benefits more than any other state from the RFS. Last week, Iowa Gov. Terry Branstad (R) called for Cruz’s defeat in the caucuses, specifically citing Cruz’s “anti-renewable fuel stand.” (Branstad’s son works for the ethanol trade group America’s Renewable Future, the organization in the Twitter photo above.) Last week, Iowa Sen. Chuck Grassley (R), a longtime proponent of the RFS, said he agreed with Branstad’s criticism of Cruz. Of course, Iowa Republicans aren’t all single-issue voters, and it remains to be seen how much ethanol will matter to caucus-goers.

Still, Cruz’s opposition to ethanol mandates puts him in a place you would never expect to find him: on the right side of a debate about climate change. Throughout the campaign, the Texas senator has been second only to Trump in his outspoken denial of mainstream global warming science. He has repeatedly used his Senate position to espouse blatantly misleading data that purportedly shows global warming stopped two decades ago. In August, he accused climate scientists of “cooking the books” and later told Glenn Beck that at this point climate change activists resemble a “religion.”

But on ethanol, Cruz is on the right track.

To understand why, let’s back up a bit. At the global climate talks in Paris in December, the United States committed to reduce economy-wide greenhouse gas emissions 26-28 percent below 2005 levels by 2025. That goal mainly hinges on slashing pollution from coal-fired power plants. But the president’s plan also calls for filling the tanks of the nation’s cars and trucks with ever more fuel made from plants. The same day the Paris talks got underway, the Obama administration increased the requirements of the RFS. The new rules guarantee a growing market for corn-based ethanol, as well as for cutting-edge biofuels made of everything from grass to algae.

Only about 5 percent of the country’s transportation fuel currently comes from biofuels (another 3 percent comes from natural gas, and the rest from petroleum). But that small number masks a rapid upward trend: Biofuel’s share has grown fourfold in just the last decade. Roughly 80 percent of that supply comes in the form of corn-based ethanol, production of which has skyrocketed 320 percent over that period. Today, one of every three bushels of corn grown in the United States ends up as ethanol. The remaining volume of biofuels comes largely from imported Brazilian sugarcane ethanol and soy-based biodiesel. A tiny splash comes from so-called “cellulosic” biofuels made from grass, cornhusks, and other nonfood sources (the term refers to lignocellulose, the material that comprises much of the mass of plants).

The nation’s love affair with biofuels dates back to the final years of the George W. Bush administration, when Congress passed the current version of the RFS. That law set ambitious long-term targets for biofuels and tasked the Environmental Protection Agency with keeping the industry on pace—hence the new requirements announced in November.

When corn ethanol started to take off in the mid-2000s, it was supposed to be an easy climate win, projected to have 20 percent lower greenhouse gas emissions per gallon than petroleum. But real-life experience proved murkier. By 2011, the EPA’s own estimates showed that corn ethanol production resulted in emissions that were anywhere from 6 percent to 66 percent higher than petroleum, depending on the kind of power source used to convert it from a cob into fuel.

The EPA estimates that corn ethanol resulted in emissions that were 6 percent to 66 percent higher than petroleum.

The original promise of biofuels was based on a basic accounting error, explains Tim Searchinger, a researcher at Princeton University and the World Resources Institute. Burning biofuels still produces tailpipe emissions; the climate benefit was supposed to come from the carbon dioxide emissions sucked out of the air as the corn grew. But the EPA’s early estimates assumed that the corn diverted to biofuel wouldn’t be replaced in the food supply. In other words, Searchinger explains, “the offset is that people and livestock eat less.” Instead, the opposite happened: As ethanol boomed and corn prices climbed, farmers in Iowa and elsewhere planted millions of new corn acres, sometimes at the expense of grasslands and forests that did a better job of capturing carbon than rows of corn do.

“If you have any amount of land use change to replace the crops, that wipes out the [climate] gain,” Searchinger says.

A similar problem arose with soy-based fuels, as soy diverted from cooking oil to biodiesel was largely replaced with palm oil from Southeast Asia. Deforestation to produce palm oil is a major source of greenhouse gas emissions.

“Definitely there are lots of environmental problems with corn ethanol, but turning back to oil isn’t the solution either,” says Jeremy Martin, a senior scientist at the Union of Concerned Scientists. “Advanced biofuels are an important part of a multipart strategy to cut emissions from the transportation sector.”

Today, cellulosic biofuels are still a bit player, though they’re growing quickly; production is expected to double this year. But they’re still lagging far behind the production levels Congress first envisioned when it created the RFS. In 2015, production of cellulosic biofuels was 96 percent below the original target. Behind that delay is a complex blend of factors. The technology needed to produce cellulosic biofuels at an industrial scale took longer to develop than originally anticipated, in part because the EPA was so far behind schedule on its RFS planning that the 2014 requirement wasn’t even announced until 2015. Delays like that have spooked investors, who were left wondering what the future market for cellulosic biofuels would look like. Meanwhile, the 2008 recession led to an across-the-board dip in gasoline consumption, further reducing market opportunities.

Cellulosic biofuels have also been crowded out by corn ethanol. Gasoline refiners are only required to mix their product with about 10 percent biofuels (the so-called “blend wall”), and they have fought vigorously against an increase in that requirement, claiming that most car engines aren’t equipped to handle anything more. Ethanol has taken up most of that share, leaving cellulosic biofuels with nowhere to go; new flex-fuel cars that can run on much higher volumes of biofuel are still a small market.

“It’s challenging to market biofuels beyond 10 percent at the moment,” Martin said. “That probably more than anything caused the difficulty with how to proceed. Without a solution to the blend wall, that’s a real problem for the cellulosic plants.”

An acre of solar panels can produce up to 300 times more energy for vehicles than an acre of corn.

One of the most promising developments for cellulosic biofuels is underway just outside Ames, Iowa, where Sarah Palin delivered her rambling endorsement of Trump last week. Here, one of the country’s first commercial cellulosic biofuel plants opened in October with much fanfare, including appearances by Gov. Branstad and Sen. Grassley. The plant, operated by chemical giant DuPont, aims to convert corn “stover” (husks and other nonedible byproducts left in the field) into a fuel that the company claims will have up to 90 percent lower emissions than petroleum.

Jan Koninckx, director of biofuels at DuPont, says that after years of false starts his industry is finally poised to deliver, at scale, a biofuel with solid environmental credentials.

“This is really the only realistic way in the foreseeable future to substantially decarbonize transportation,” he says.

Of course, one of the most promising options for climate-friendly cars might not rely on liquid fuel at all. The market for electric vehicles is growing by leaps and bounds. And according to Searchinger’s research, an acre of solar panels can produce up to 300 times more energy for vehicles than the same acre planted with corn. Using electricity instead of gasoline could drastically cut greenhouse gas emissions and reduce America’s dependence on oil imports—without the concerns about land use.