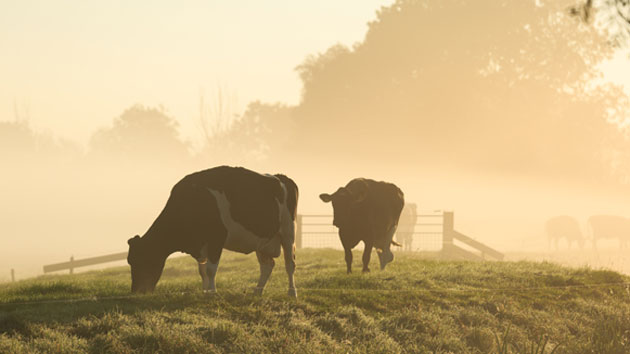 This story was originally published by Reveal from the Center for Investigative Reporting and is reproduced here as part of the Climate Desk collaboration. Subscribe to the podcast and learn more at revealnews.org.

If the Paris climate pact is going to succeed at staving off climate change disaster, the 195 participating countries will need to achieve a difficult feat—trust.

Yet the US government already is failing to implement its own rules on tracking emissions. It is not collecting emission reports from one of the country’s largest sources of greenhouse gases: meat production.

In its latest appropriations bill passed in December, Congress renewed a provision that prevents the Environmental Protection Agency from requiring emission reports from livestock producers. The move came only days after US officials stressed to other governments the importance of accurate reporting at the Paris climate negotiations.

The US government collects the reports from 41 other sectors, making the meat industry the only major source of greenhouse gases in the country excluded from filing annual reports.

Livestock producers, which include meat and dairy farming, account for about 15 percent of greenhouse gas emissions around the world. That’s more than all the world’s exhaust-belching cars, buses, boats and trains combined.

The meat industry the only major source of greenhouse gases in the United States that is exempted from annual emissions reports.

The EPA has called the emission reports “essential in guiding the steps we take to address the problem of climate change.”

As a result of having inadequate information on livestock producers, the US government is vastly underreporting its true greenhouse gas emissions, according to a growing consensus of American scientists.

In 2013, a team of researchers from Harvard University, Stanford University, the US National Oceanic and Atmospheric Administration, Lawrence Berkeley National Laboratory and elsewhere worked together to collect air samples and analyze actual emissions near large livestock operations such as cattle feeding lots in California, Nebraska, and Iowa. They found that greenhouse gas emissions from livestock were twice as bad as what the EPA estimated. Subsequent studies have found similar results.

The United States is underreporting its total greenhouse gas emissions to the United Nations by about 4 percent per year as a result of bad livestock data—nearly equivalent to the entire emissions of Spain, according to the 2013 study.

The EPA’s ban on collecting reports from the US livestock industry, which is the second-largest in the world behind only China, goes back several years.

Americans eat more meat per capita than any other nation.

But the EPA never received a single report from meat producers. In 2010, when the first reports were to be collected, Congress attached a provision to the EPA’s budget. It prohibited the agency from spending money to collect emission reports on livestock producers—specifically the greenhouse gases emitted from some of the 335 million tons of manure produced each year.

Monitoring and curbing greenhouse gases from livestock is considered vital to stopping global warming, according to scientists.

“Global demand for livestock products is projected to grow 70 percent, if not double, by 2050,” wrote Debra Donahue, law professor at the University of Wyoming College of Law. “Plainly, neither the United States nor the earth can continue on this track, yet this is precisely our course.”

Decomposing manure is one source of livestock emissions. Technology exists to capture the methane and turn it into electricity, although it is rarely used in the United States. The other major source of emissions are the cows themselves, which belch and fart methane. Scientists also have developed methods for reducing methane emissions from the cows, such as changing their diets. But there is little incentive for large-scale farms to adopt these practices in the US.

The world is left guessing about American cow farts, even as US officials demand accuracy from other nations.

Under current regulation, there are even disincentives. If a livestock operator were to capture the methane, turning it into electricity or another form of energy, it would then fall under climate change regulations. By doing nothing and simply allowing the methane pollution to escape into the atmosphere, livestock operators do not have to deal with the EPA greenhouse gas rules.

Methane is 72 times more potent than carbon dioxide when it comes to trapping heat and increasing global temperatures. But it stays in the air for a far shorter period of time—it mostly disperses within 12 years.

Scientists say changing our food system will have a quicker impact on stopping climate change than altering our fossil fuel habits.

But politicians and even environmental groups are afraid to talk about it because they fear a backlash from the meat-loving public, according to a 2014 report by Chatham House, a London-based think tank. The report found governments such as the United States were doing little about the problem and that “recognition of the livestock sector as a significant contributor to climate change is markedly low.”

Sometimes, it’s even hostile. In 2013, the head of the EPA, Gina McCarthy, testified to the US House Committee on Science, Space and Technology. Rep. Thomas Massie, R-Kent., wanted assurances that regulators would not monitor livestock.

Massie: There is one other issue that affects rural America that just has us scratching our heads. I hope it is an urban legend. Is anybody in the EPA really looking at regulating cow flatulence?

McCarthy: Not that I am aware of.

Massie: (He then asks more broadly about methane emissions from cattle.) Can you assure us today that you are not investigating that?

McCarthy: I am not looking at that.

Massie: Nobody in the EPA is?

McCarthy: Not that I am aware of.

US politicians seem concerned about voter backlash if they appear critical of US eating preferences. Americans eat more meat per capita than any other nation.

However, for meat producers, the cost to better monitor emissions appears to be insignificant, at least according to the country’s largest pork producer. WH Group, a Hong Kong-based company that owns about 1 in 4 American pigs, wrote an 1,100-page prospectus to investors that included a tidbit about how it has never filed a greenhouse gas report to the EPA because of the annual intervention by US lawmakers.

It is not expected that such costs would have a material adverse effect on our hog production operations in the US.

Big companies like Smithfield Foods, which is owned by WH Group, could implement monitoring technology, and it would cover much of the emissions from US livestock. The largest 2 percent of all livestock farms now produce more than 40 percent of all animals, according to the U.S. Department of Agriculture.

But for now, as a result of congressional action, the world is left guessing about American cow farts, even as US officials demand accuracy from other nations. If the 194 other participants to the Paris climate pact think that stinks, who can blame them?