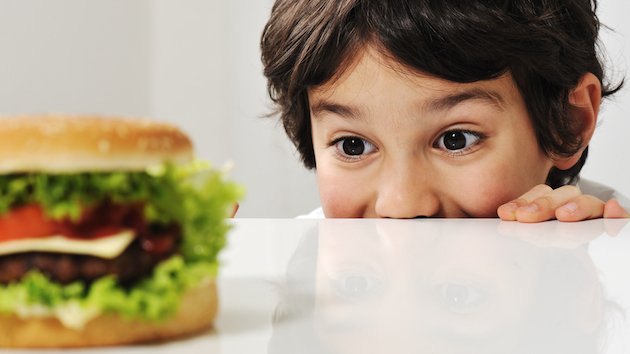 According to a 2015 New York Times analysis of government and private-sector data, the number of calories consumed annually by the average US child declined 9 percent between 2004 and 2013. And yet, researchers from Duke and Wake Forest have found that trend has not improved the child obesity situation.

Using body mass index data from the National Health Examination Survey, which tracks randomly selected households with health exams and surveys every two years, the researchers calculated moderate (class 1), mid-level (class 2) and extreme (class 3) obesity rates among kids aged 2 to 19. Here’s what they found, from a paper they published in the peer-reviewed journal Obesity. 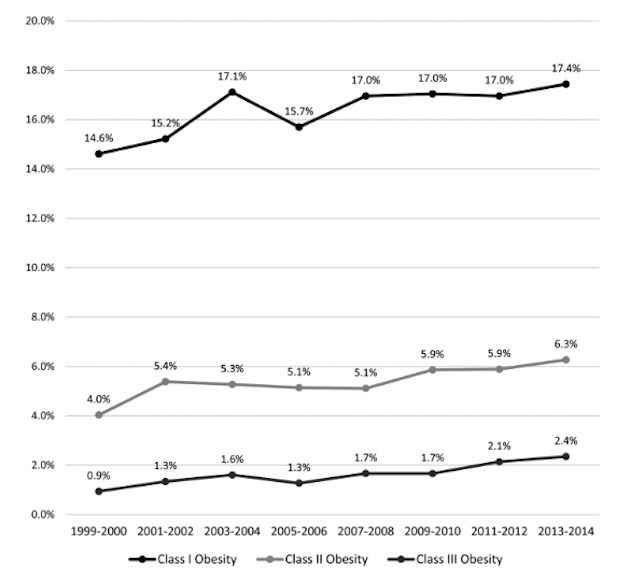 The “overweight” rate—which encompasses the above “obese” categories as well as slightly overweight kids—also nudged upward from an already-high level: 28.8 percent from 1999 to 2000, compared with 33.4 percent from 2013 to 2014, the study found. The authors broke out data by age, gender, and race, and not a single group showed a statistically significant decline in obesity or being overweight over the time frame. (The authors used standard definitions from the Centers for Disease Control and Prevention: Overweight kids fall between the 85th and 95th percentiles compared with peers of the same age and gender, while obesity starts above the 95th percentile.)

So, despite the above-mentioned drop in calorie intake, our kids are still packing on too much weight too fast. What gives?

I put the question to Barry Popkin, a veteran obesity researcher and professor of nutrition at the University of North Carolina at Chapel Hill School of Public Health. (He wasn’t involved in the paper). He said that while kids have eased up on problematic items like sugary sodas in recent years, they’re “not shifting the quality of [their] diets toward healthy foods.” Instead, “we continue to see our children mainly eat what we would call junk food,” relying heavily on cookies and other grain-based sweets, along with plenty of salty snacks, fruit juice (which acts an awful lot like soda in our bodies), and other sugary beverages.

A recent analysis of another big federal data set, the National Health and Nutrition Examination Survey (NHANES), bears out Popkin’s claim. When infants transition from baby food to solid food, they still tend to get plied with plenty of processed junk and few vegetables, the study found (more here). The report noted that 40 percent of babies get brownies or cookies, and that French fries and chips are the most common form of vegetables kids eat by the time they’re two years old.

But obesity doesn’t exist just because of individual choices by parents and kids. On the policy front, the US government “has yet to aggressively do more than try to make some minor changes in a few programs,” Popkin added. For example, Congress and President Barack Obama reformed the school food environment in important ways back in 2010, cutting down on the once-ubiquitous availability of sugary snacks and beverages, but public school cafeterias are still constrained by tight budgets to churning out plenty of highly processed food. (More here on the the modest US lunch reforms and the brewing congressional backlash against them.) In Brazil, by contrast, “70 percent of all food served in schools must be real food that is healthy,” Popkin said.

And then there are chemical factors not directly related to food choices. Chemicals like bisphenol A (BPA) and phthalates are ubiquitous in food packaging and all manner of consumers products; yet there’s “strong mechanistic, experimental, animal, and epidemiological evidence” that at tiny doses they mess with our endocrine systems and can trigger obesity and diabetes, warns the Endocrine Society. Kids can be saddled with a higher risk of obesity before they’re even born, when their pregnant moms are exposed to BPA.

Add all of this to stubbornly low rates of physical activity among kids and the long decline of time and resources devoted to physical-education classes and even recess, and it’s no wonder our childhood obesity problem persists.