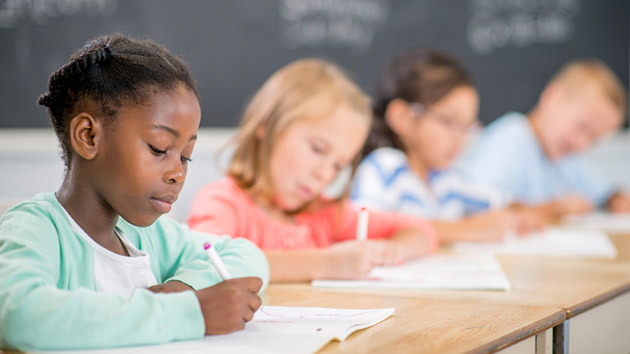 Students at nearly half the public school buildings in Newark, New Jersey, have been drinking bottled water for the last month, ever since public officials disclosed that the water from drinking fountains and faucets contained high levels of lead. Just last week, the school district released a new batch of results that implicated charter schools as well. The fountains at these schools have been shut off, and signs posted in the bathrooms urge kids not to drink from the taps.

“The schools that you do not hear about” are the most concerning, says Mark Edwards, a professor who helped expose the Flint crisis.

But Newark is hardly alone: Students in Boston, Baltimore, and Camden, New Jersey, have been drinking trucked-in water for years due to lead concerns. In a way, they are the lucky ones: These systems are actually testing their water for lead, either voluntarily or because of public pressure. “It’s definitely the schools that you do not hear about” that are the most concerning, says Mark Edwards, the Virginia Tech professor whose follow-up studies in Flint revealed the extent of the lead contamination there.

It may seem incomprehensible that drinking water for children could go without scrutiny, yet roughly 90 percent of the nation’s schools aren’t required to test their water, says Yanna Lambrinidou, a Virginia Tech University scientist who studies the issue. The Environmental Protection Agency requires schools to be connected to a water source that is regularly tested for lead, but those schools needn’t test for on-site contamination.

Any school or day care with old plumbing may be vulnerable, Lambridinou says, and that’s “the vast majority.” Because even though lead service lines and solder were banned in 1986, schools continued to install leaded brass drinking fountains until just a few years ago. Here’s a quick drill-down of some major school districts where bottled water is the new normal.

Newark Public Schools: Water fountains in 30 of the district’s 66 public school buildings were shut off on March 9 after water tests found lead in excess of the Environmental Protection Agency’s action limit of 15 parts per billion. About 12 percent of samples taken from Newark school buildings between 2012 and 2015 had previously exceeded the EPA cap, but until this year the schools addressed the problem by replacing individual filters and faucets.

“I think the way the world would receive these data is different after Flint.”

Upon learning of the test results, schools superintendent Christopher Cerf, who took over last year, says he immediately reached out to the state’s Department of Environmental Protection, which recommended temporarily cutting off water to the fountains. “Our national consciousness has been raised by other national events,” Cerf told the New York Times. “I think the way the world would receive these data is different after Flint.”

Schools serving 17,000 Newark students—a number that will rise with the most recent findings—now rely on bottled water for drinking and food prep, although students still wash their hands with the tap water. The city is working on a longer-term testing and treatment plan. In the meantime, schools are offering free blood tests for students. Some 300 have gotten the screenings to date, but no results have been made public.

A suit claiming officials failed to test for lead in schools they knew were tainted was dismissed on a technicality.

Camden City School District: Schools in Camden, about 85 miles from Newark, have been distributing bottled water since 2002 at an annual cost of $75,000 for their roughly 12,000 students. In July of that year, the district discovered that 26 of 34 school facilities showed signs of impermissible lead levels. State officials then put up $140,000 to install flushing systems at 28 schools to eliminate standing water in their pipes. (The other schools already had such systems in place.) This coincided with a state effort to remove 3,000 lead water lines from Camden’s antiquated infrastructure.

At the time, the Philadelphia Inquirer reported that schools would stick with bottled water—a temporary solution, noted one school board member—until they could meet the federal lead standard. In March 2003, seven residents sued the school district, claiming officials had failed to institute routine water testing in schools despite allegedly knowing about the high lead levels for years. A federal judge dismissed the case, ruling that the school board qualifies as a state agency and is thereby immune to lawsuits.

In late March, district spokesman Brendan Lowe told NJ.com that he was unaware of any plans to fix the aging infrastructure. He said the water coolers, “along with flushing systems in our older buildings and filtration systems in our newer buildings—has worked successfully for students and staff to date.”

Boston Public Schools: Five-gallon coolers have replaced drinking fountains in more than two-thirds of Boston’s school buildings, costing hundreds of thousands of dollars each year. Many of the fountains were shut off back in 1988, when tests at roughly half the city’s elementary schools revealed lead levels higher than the old EPA action limit of 50 parts per billion—it’s now 15 ppb.

According to the Boston Globe, roughly two dozen of the 37 schools that are still using tap water haven’t been tested for lead in six years. Of those schools that were tested, three exceeded the EPA standard—a drinking fountain at one elementary school had water seven times the federal limit.*

In a statement, BPS spokesman Richard Weir said the district “is taking all necessary steps” to ensure that any new water fountains meet state and federal standards. The district recently launched a $300,000 pilot program to install new hybrid fountains with bottle-filling stations at six schools, but some of those fountains have already tested for elevated lead, the Boston Globe reported. The district says it is investigating.

Baltimore City Public Schools: The saga began in the 1990s, when it was revealed that water in numerous Baltimore schools exceeded the federal lead standard. Some got water coolers, and the school district, which encompasses nearly 85,000 students, ordered drinking fountains shut off. But nobody ever followed up to make sure the order was carried out.

An intrepid parent visited dozens of schools and found kids drinking from fountains known to be tainted.

In 2003, James Williams Sr., whose child had suffered from lead poisoning in the previous decade, visited dozens of schools and found students drinking from fountains that had previously tested high for lead. His findings prompted Peter Bielenson, the city’s health commissioner at the time, to order the fountains shut down. But despite subsequent efforts to implement testing and flush lead from school water systems, the district still couldn’t shake off its lead problem.

In 2007, the city health department randomly tested 74 water fountains at 10 different schools and found 10 dispensing water with lead levels in excess of 20 ppb. Andres Alonso, then Baltimore’s schools chief, announced that the entire district would switch to bottled water, which was cheaper than fixing all the infrastructure—the bottled option at the time cost $675,000 per year. Joshua Sharfstein, then Baltimore’s health commissioner, told the Sun, “It just would cost so much more to test and fix and test and fix than doing what I think people prefer anyway.”

BPS spokesman Richard Weir contacted us after the story was published to add that after the high lead levels were detected, all of that school’s fountains were deactivated, and the school went back to bottled water. He says that tests conducted in 2011, prior to installation of new fountains, showed permissible lead levels.