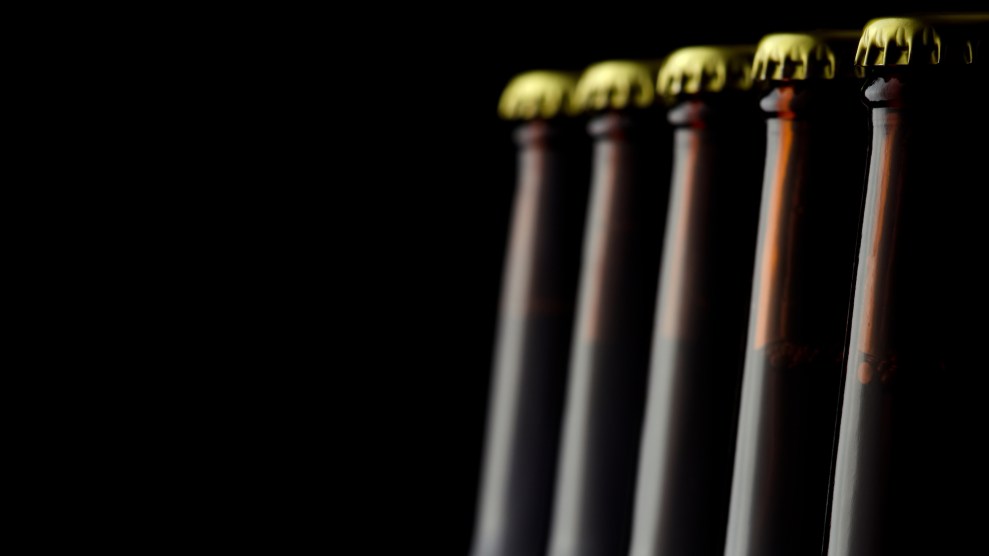 Nothing says America like an ice-cold can of lavishly marketed, insipidly flavored beer. That’s the calculation of AB InBev, the Belgium-based conglomerate that owns Budweiser, the brand that once towered over the US beer landscape like a giant beer-can balloon at a fraternity tailgate party. Earlier this month, AB InBev replaced “Budweiser” with “America” on the front of its 12-ounce cans and bottles sold in the United States, while also adorning the label with quotes from the Pledge of Allegiance, “The Star Spangled Banner,” and “America the Beautiful.” You’ll be able to pop open an icy America until the November election, after which Bud packaging will revert to normal.

Yet the gimmick, lampooned by John Oliver and celebrated by Donald Trump, is unlikely to lift Budweiser’s long–sagging US sales. And Bud Light, still America’s favorite beer and InBev’s crown jewel, is also fading in popularity. That’s why AB InBev is pursuing a megamerger with South African and UK rival SAB Miller. The $100 billion deal, which won approval by antitrust authorities in the European Union Tuesday, would give the combined company about 30 percent of the global beer market by volume, analysts say, making it the source of about one of every three beers consumed on Earth. Brands include Bud (or, um, “America”), Stella Artois, Beck’s, Corona, and Leffe.

The $100 billion deal would give the combined company about 30 percent of the global beer market by volume.

But the buyout isn’t about Europe or the United States at all—AB InBev’s bold Bud rebrand aside. Indeed, to pass antitrust muster in Europe, the combined company had to agree to “sell almost the whole of SABMiller’s beer business in Europe,” Reuters reports. The United States and Europe are “mature”—i.e., slow-growing—beer markets. The real action right now is elsewhere. As Reuters puts it, AB InBev is “looking to boost its presence in Africa and Latin American countries to offset weaker markets such as the United States, where drinkers are shunning mainstream lagers in favor of craft brews and cocktails.”

Here in the United States, corporate beer is a still-profitable but shrinking business. Brands owned by or affiliated with InBev and SAB Miller account for 71 percent of the US beer market. But people are spurning corporate swill and opting for brews from a rising tide of independent breweries focusing on flavor and regional identity. Known as “craft brewers,” these outfits saw their beer output grow 12.8 percent in 2015, even as overall US beer production dropped 0.2 percent, according to the Brewers Association, a craft-brew trade group.

Those numbers represent the slow hemorrhaging of US sales and profitability for the beer giants. That’s where SAB Miller comes in. While it does well off mega US and European brands like Miller and Pilsner Urquel, where it really shines is in the global south—the company claims to pocket 72 percent of its earnings from developing countries. The real prize for InBev is Africa, where SAB Miller owns about a third of the beer market and InBev has almost no presence. Though both companies’ Western operations are stagnating, SAB Miller’s profits in Africa are rising at the rate of 20 percent annually, the company claims.

Latin America is a mixed bag. The Wall Street Journal reports that in Brazil, where AB Inbev already dominates, beer sales are falling. But in Peru and Colombia, where SAB Miller has a strong foothold, beer is a high-growth business. As a Wall Street analyst told the Journal, Budweiser and Bud Light “are damaged and never coming back,” while “Africa and Latin America are on fire.”

So while AB InBev may fiddle with the branding of its flagship US product, snap up the occasional fast-growing craft brand, and use its heft to squeeze indie brewers, its gaze is really trained on untapped markets abroad.