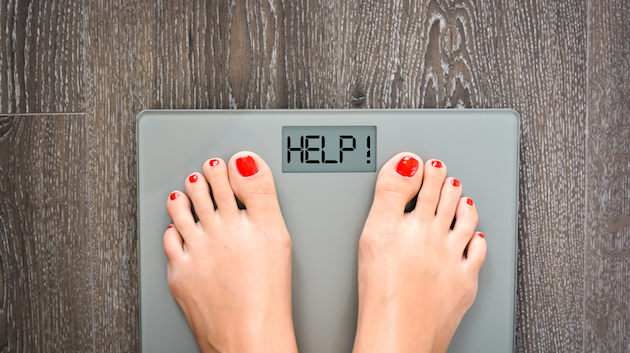 NBC Reality show The Biggest Loser stands at the intersection of a great American contradiction: We have a food system geared toward moving mountains of cheap, flavor-engineered, and fattening junk; meanwhile, our pop culture equates thinness with beauty.

Add the show’s appeal to our thirst for degrading spectacles and our appetite for self-help treacle, and you’ve got quite a profitable enterprise—complete with a 16-season run on network TV, four resorts, cookbooks, workout videos, and exercise gear.

But as a New York Times piece underscored earlier this week, what The Biggest Loser doesn’t do is provide any kind of recipe for sustained weight loss. That’s the obvious takeaway from a dramatic peer-reviewed study published in the journal Obesity that tracked 14 of 16 Biggest Loser contestants from the 2009 season to see how they fared in the years after time on reality TV.

Two things struck me about the story. One is the brutality of the regimen that contestants subject themselves to. Here’s the Times, describing the routine of 2009 contestant Danny Cahill, who arrived on the show’s set weighing 430 pounds and exited weighing 191 pounds—a 56 percent drop:

Sequestered on the “Biggest Loser” ranch with the other contestants, Mr. Cahill exercised seven hours a day, burning 8,000 to 9,000 calories according to a calorie tracker the show gave him. He took electrolyte tablets to help replace the salts he lost through sweating, consuming many fewer calories than before.

To put those numbers in perspective, consider that the US Department of Agriculture estimates that a moderately active adult male should consume about 2,600 calories daily to maintain body weight. Cahill was routinely burning through more than three times that much.

The second thing was the punishing effort contestants have expended in the years since, in a futile effort to keep the pounds off. For four years, Cahill exercised two to three hours per day to keep his weight below 255 pounds while pursuing a “new career giving motivational speeches as the biggest loser ever.” Essentially, Cahill was spending about as much time exercising daily as a healthy adult needs in an entire week, according to the Mayo Clinic’s recommendations. Not surprisingly, he couldn’t keep it up. When that motivational-speaker work dried up, he returned to his old job as a surveyor—”and the pounds started coming back.” Now Cahill weighs 100 pounds more than he did after stepping off Biggest Loser ranch, the Times reports.

When your body adapts to a certain weight—based on genetic factors, but also on diet and exercise—it pushes to maintain that weight even when those habits drastically change.

All the other contestants in the study followed a similar path: a steep loss for the cameras followed by a long and vexed struggle to maintain it. The participating contestants lost an average of 128 pounds during their stints on the show—and have regained about 90 pounds since. Some are heavier now than before they began their TV exertions.

Their problem is a phenomenon about as ubiquitous and invisible as gravity: what the researchers call “persistent metabolic adaptation.” That is to say, when your body adapts to a certain weight—based on genetic factors, but also on diet and exercise—it pushes to maintain that weight when those habits drastically change. It does so essentially by putting the breaks on metabolism. A lower metabolism translates to higher propensity to put on pounds—in essence, your body is less efficient at burning calories and more prone to storing the excess as weight.

When they began their time on The Biggest Loser, the contestants had a “resting metabolism rate” (RMR) of, on average, 2,607 calories. The RMR measures how much energy your body consumes per day maintaining normal functions. Anything you consume above that amount has to be balanced by calorie-burning activity or you put on weight.

By the time they left the show, their average RMR had fallen to 1,996 calories—their bodies burned significantly fewer calories per day than they had burned before, putting pressure on them to eat very little and exercise a lot to maintain their new weights. Six years later, the researchers found—to their surprise—the contestants’ RMR levels haven’t budged much at all, even though they have regained nearly three-quarters of the weight they had lost. More than a half decade after their made-for-TV ordeal, their bodies are still geared to add more weight. Here’s the Times:

As the years went by and the numbers on the scale climbed, the contestants’ metabolisms did not recover. They became even slower, and the pounds kept piling on. It was as if their bodies were intensifying their effort to pull the contestants back to their original weight.

In other words, the study suggests, for overweight people, extreme measures like hours per day in the gym and severe calorie restrictions—what The Biggest Loser presents—isn’t a long-term weight-loss strategy.

I reached out to the show’s producers for comment on the Obesity study. “We have comprehensive procedures and support systems in place which we routinely re-evaluate to ensure all contestants receive the best care possible,” they replied in an emailed statement. “The lead medical doctor on the show, who has worked with the National Institutes of Health on initiatives in the past relating to The Biggest Loser, has been made aware of this most recent study and is in the process of evaluating its findings.”

While researching this piece, I alighted upon the webpage for The Biggest Loser‘s resort program, which runs resorts in Chicago, Florida, New York, and California and calls itself a “A Life Changing Weight Loss Program.”

A live-chat box popped up, offering assistance. To find out what sort of claim the company makes, I typed in a hypothetical query: “I weigh 350 and hope to get down to 200. Can you help?”

“Absolutely!” came the response. “Are you associated with the TV show?” I asked. “Yes we are!” My chat interlocutor went on to estimate that I could expect to lose four to seven pounds per week at the resort, exercising “about” six hours per day. When I expressed concern about maintaining losses going forward, the person reassured me: “Our educational seminars are built to really help you keep the weight off and continue your program at home!” Rates start at $2,995.00 weekly, plus tax, the rep added.