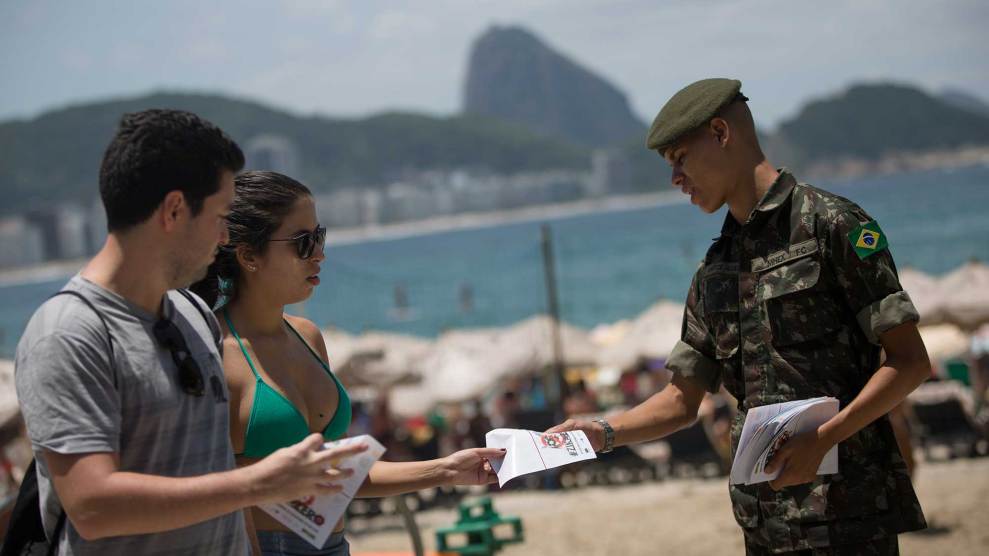 A soldier hands out flyers about the Aedes agypti mosquito in Rio de Janeiro.Leo Correa/AP

Brazil is in crisis. Earlier this month, President Dilma Rousseff was ousted from office after a series of scandals led to impeachment proceedings. Newly installed opposition leaders are facing a series of corruption charges of their own. And the Zika virus, first detected in Brazil in April 2015, continues to stymie public health officials concerned about the upcoming Summer Olympics in Rio de Janeiro.

So far, the new government’s approach toward Zika has been questionable, at best: The new health minister, Ricardo Barros, is an engineer with no previous experience in health administration. And while Barros listed the fight to eradicate the Aedes aegypti mosquito as one of his top priorities when he took over, he’s got his work cut out for himself: Zika has infected 120,161 Brazilians in 2016, with another 1,434 confirmed cases of microcephaly since October (up from around 150 per year).

But how has Zika affected the lives of average Brazilians? Here are some unexpected ways the virus is impacting people on the ground.

There’s no privacy when it comes to Zika: As part of the government’s Aedes aegypti eradication plan, federal health agents have been going door to door to inspect backyards and educate the public. Ever since Rousseff signed a new rule into law in January, these agents have been allowed to force their way into public and private buildings—including people’s homes—to search for mosquito breeding sites if no one answers the door after two separate visits. If necessary, the police can be called upon to help gain entrance.

“I had people calling here saying that they were afraid their babies would be born with microcephaly and we should work it out.”

There’s been a rush on bug repellent: Last November, right after the government announced that the increase of microcephaly cases in northeastern Brazil was probably related to Zika, many Brazilians—especially pregnant women—rushed to drugstores to buy mosquito repellent. But not just any repellent: Experts in the field started to recommend a specific brand, Exposis, which is the only one in Brazil made with Icaridin, an ingredient said to guarantee up to 10 hours of protection.

According to Paulo Castejón Guerra Vieira, general-director of Osler of Brazil—the lab that produces Exposis—the company had prepared for dengue and chikungunya epidemics but was surprised by the Zika explosion. The resulting shortage led to a repellent black market, with Exposis selling for more than double its already-expensive original price of $16 a bottle. Pregnant women started to stock it. Production increased 30-fold to meet demand. “I had people calling here saying that they were afraid their babies would be born with microcephaly and we should work it out,” Guerra says. “We did everything we could to increase production.” They were finally able to meet demand four months later, in March.

Introducing species-killing, multicolored GM mosquitoes: Millions of genetically modified mosquitoes have been released as part of research projects to reduce mosquito populations across the country. In the most recent test, transgenic mosquitoes helped cause an 82 percent reduction in larvae in a neighborhood in the city of Piracicaba, located the state of São Paulo. (The GM mosquito produced by the company Oxitec has an alteration that prevents offspring from developing.) Two cities in the state of Bahia have seen similar results with transgenic mosquitoes.

In the last few months, residents of Piracicaba have been surprised and a little frightened to find pink, blue, and yellow mosquitoes flying through their homes. These GM insects were actually dyed with powdered paint so the researchers could better control their survival in the wild. 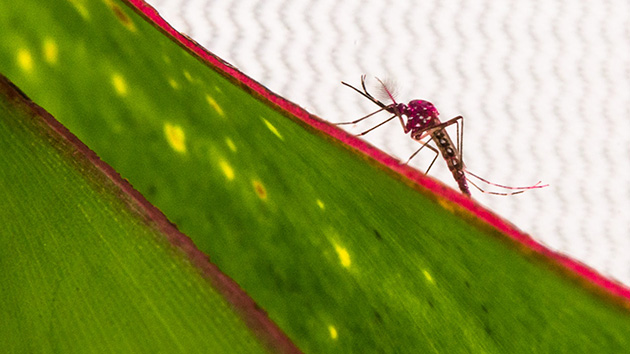 In vitro fertilization just got even more complicated: There have been countless reports of couples delaying pregnancy because of the risk of microcephaly. But what about those considering in vitro fertilization? According to new rules, they must first take Zika tests.

The exams started to be mandatory in April, following a resolution by the Brazilian equivalent of the US Food and Drug Administration, and it is now a requirement for the couple and for sperm and egg donors. According to geneticist Ciro Martinhago, who runs a São Paulo laboratory specializing in reproductive genetics, many couples who had gone through fertilization procedures at the end of last year decided to postpone the embryo transfer until the beginning of Brazil’s winter, when there are fewer mosquitoes.

Martinhago’s laboratory was the first in Brazil to offer a molecular test to detect Zika in semen, and he even got requests from men who weren’t going through in vitro but wanted to make sure they weren’t putting their sexual partners in risk. According to a preliminary data published in the journal Emerging Infectious Diseases, the virus could be detected in semen up to 62 days after the first symptoms. On May 10, the Brazilian Ministry of Health recommended the use of condoms to prevent sexual transmission of Zika, especially among pregnant women.

Nearly 70 percent of the 1,947 reported cases of microcephaly through the beginning of May came in families living in extreme poverty.

Poor Brazilians are more affected by microcephaly, and officials aren’t sure why: Microcephaly, the most severe condition so far associated with Zika, seems to be impacting the poor more intensely. According to data released by the Secretary of Social Development, Children, and Youth of Pernambuco, one of the first states affected by the microcephaly outbreak, 69 percent of the 1,947 reported cases through the beginning of May came in families living in extreme poverty.

While low-income populations are more likely to be exposed to the mosquitoes, scientists are already looking at other factors that might be increasing their microcephaly risk—specifically, poor nutrition and exposure to previous infections.