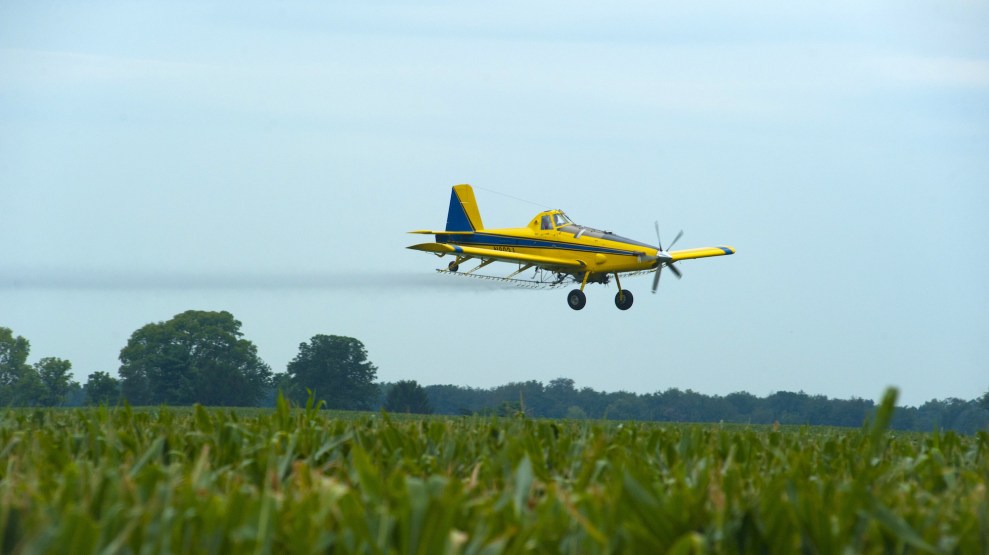 Atrazine, the second most commonly used herbicide in the United States, is mainly used to control weeds in the corn blanketing much of the Midwest. The chemical also routinely turns up in streams and drinking water. And according to a new Environmental Protection Agency preliminary risk assessment, it may be doing serious harm to fish, animals, and amphibians, even at extremely low exposure levels.

Atrazine may be doing serious harm to fish, animals, and amphibians, even at extremely low levels.

To figure out whether a toxin is damaging ecosystems, EPA scientists crunch data from peer-reviewed research to establish what they call “levels of concern”—the threshold above which the chemical can be expected to cause harm. In the areas where it is most commonly used, mainly the Midwestern corn belt, atrazine turns up in the environment at rates that exceed established levels of concern “by as much as 22, 198, and 62 times for birds, mammals, and fish, respectively,” the report concluded.

As for amphibians like frogs, the report found “potential for chronic risk” from atrazine at real-world exposure levels—not rapid death, like what a roach might experience after a blast of Raid, but long-term, subtle damage, like an impeded ability to reproduce. The EPA paper cited several studies by Tyrone Hayes, an integrative biologist at the University of California-Berkeley who has found that miniscule amounts of the chemical can trigger sex changes in frogs. In response to his research, atrazine’s maker, the agrichemical giant Syngenta, embarked on a spirited, sustained effort to discredit him, detailed in a 2012 Mother Jones piece and a 2014 New Yorker feature.

I asked Hayes whether he felt vindicated by the EPA’s new report. “Asking me if I feel vindicated is like asking someone who’s been in jail for 10 years for something he didn’t do whether he feels vindicated when he gets out,” he said.

Syngenta, for its part, rejects the concerns raised by the EPA. “The draft ecological risk assessment drew conclusions based on a number of scientific errors and flawed interpretations,” a company spokesperson wrote in an email. “This draft ecological risk assessment is inconsistent with a number of EPA’s previous conclusions as well as assessments by other regulatory agencies around the world.”

The European Union banned atrazine in 2004, citing its potential to contaminate water and harm ecosystems. And this latest EPA report suggests the US government might also consider reining in use of the chemical. But probably not anytime soon. The agency has been reviewing atrazine’s registration since 2009, and the wheels turn slowly. On Monday, the EPA published the assessment in the Federal Register, opening a 60-day period for public comment. An EPA spokeswoman says it won’t be finalized until 2017—meaning no regulatory action until well after the presidential election.

Meanwhile, the EPA is also mulling an even more heated issue: atrazine’s impact on human health. The agency expects to release its human-health assessment “later in 2016,” a spokesperson said. Back in 2011, the EPA released the final deliberations by a panel of independent scientists it had convened to address the topic. Its conclusions were not comforting. (Here’s my summary from the time.) The panel found that atrazine had “suggestive evidence of carcinogenic potential” for ovarian cancer, non-Hodgkin’s lymphoma, hairy-cell leukemia, and thyroid cancer, and that “there is inadequate evidence” to determine whether atrazine causes prostate cancer, breast cancer, liver cancer, esophageal cancers, and childhood cancers.

A recent paper by Texas A&M and Iowa State University researchers looked at research published since 2000 and concluded that “higher concentrations of atrazine in drinking water” have been associated with a variety of birth defects in people.

“The science has been settled for a long time,” Hayes told me. “Now it’s politics and economics.” Apparently, it will be up to a Clinton or, gulp, Trump administration to do something about it.